Andy Maloney, from New Zealand, continues to lead the 86 boat Finn fleet after the third day of racing at the 50 Trofeo S.A.R Princesa Sofia IBEROSTAR in Palma, Mallorca. His teammate Josh Junior is now up to second, while Facundo Olezza, from Argentina is up to third. Both Junior and Olezza took race wins in the gold fleet, but for much of the fleet it was a high scoring day. 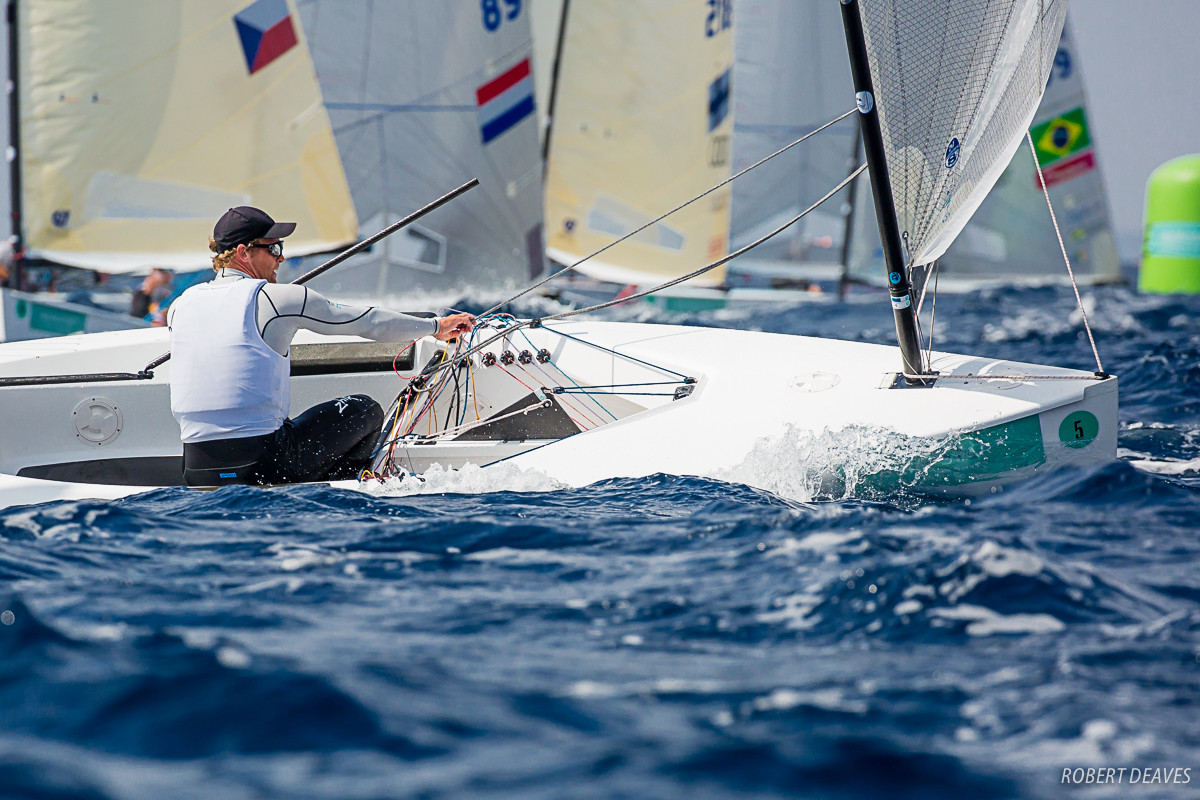 On Wednesday, the fleet was separated into gold and silver groups for the first time with the light winds so far mixing up the groups. Also for the first time this week the racing got away on time, albeit in a very light breeze, against all forecasts, though it did build later in the day for a better second race.

A look at the scoreboard for today tells its own story with few sailors achieving any kind of consistency. Only two sailors managed single digit finishes in both races, while many at the top picked up a mid-fleet finish. It opens things up hugely for the final two days of the opening series before Saturday’s medal race, with little room remaining for further errors.

Highlights from Day 3 in Palma

In the gold fleet, Junior took the first race in very light conditions after a patchy first beat the that left many of the favourites struggling near the back of the fleet and with a lot of work to do. London 2012 bronze medallist, Jonathan Lobert, from France finally had a good race to cross in second while Maloney consolidated his lead with a third.

There was stronger breeze for the second race, which brought some new faces to the front. Fabian Pic, from France, was fighting for the lead with Olezza, but Olezza had the best final downwind to take the win, while Ioannis Mitais, from Greece took third.

Junior explained his day. “Another light air day today with about 7-9 knots and the breeze was oscillating back and forwards and sometimes was quite hard to read. For me and Andy [Maloney] it’s pretty cool to be back in Europe, and it’s probably the first time we have lined up against a lot of these guys since the worlds in Aarhus last year, and it’s a chance for us to check in and see how we are going. We’re really enjoying it and it’s good to be racing at the front.”

On doing so well, “We’ve certainly won a few races, but there is still a lot of racing to go and a lot of important races still to go. We’ll see how it develops over the rest of the week, but so far so good.”

The key today? “Probably couldn’t really tell you. I think we are both going quicker than we have before, and that’s keeping us in the game, but just staying in phase with the shifts and staying in the right part of the pressure on the shifts is really key. You just have to get out in front and try to stay there.”

“We’ve been working a lot on trying to get faster in the light air breeze, the sort of range we’ve had, so we’ve put a lot of effort into that. I think we’ve made some progress and would certainly like some more, but we’re certainly getting there. It’s just about time on the water really – just putting in the effort.”

Junior had the best day on the water, but still put 10 points on the board. The next best was Johannes Pettersson, from Sweden, and Lobert, who each collected 13 points.

Pettersson moves up to fourth overall. He said, “It’s been going good for me with an eighth and a five today, so going well. Hopefully we’ll hold up for the rest of the regatta.”

On his clear improvement this season. “I think the reason why I am starting to go well now is that I the feeling in the boat has loosened up a bit. I am feeling much more confident in the boat, good boatspeed, upwind and downwind, and especially the starts I think if you can start well in these kind of conditions you are going to do well.”

“I am still a bit behind Max [Salminen, the Swedish No 1] in terms of ranking, but it’s always nice to put some pressure on him. If I keep on like this I know he will step up as well. It’s just a matter of time.”

On the Olympic decision, “The World Sailing decision to kick out the Finn has not been so good for me. My long-term plan was to go sailing the Finn. Because of my size I am way to big for any other boat. I don’t know what to do after this Olympic cycle, but I am going to tag along sailing the Finn as long as possible and see what pops up after that.”

But currently he has no pathway after Tokyo. “Keelboats don’t really appeal to me. I like the more physical side of the sport. I think if I am going to do any Olympic sailing it has to be in some kind of dinghy.”

Racing continues in Palma Thursday with two more races scheduled. Ten races are scheduled through to Friday with the medal race for the top 10 on Saturday.