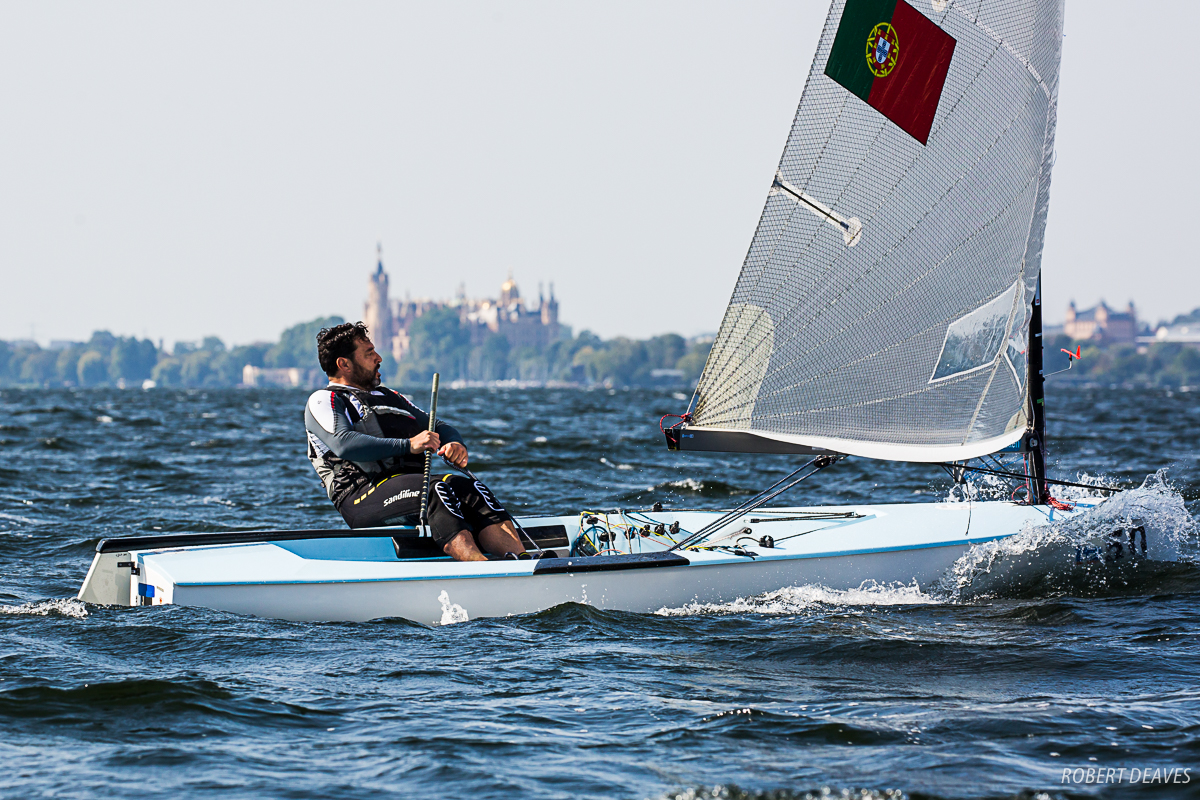 Filipe Silva, from Portugal, leads the Finn European Masters in Schwerin, Germany after two races on the opening day, Wednesday. Bas de Waal, from The Netherlands is second with Volodymyr Stasyuk from Ukraine in third. The race wins eventually went to Andre Budzien, from Germany, and Silva, though neither led the fleet across the line.

The event has attracted 65 entries from 16 nations including sailors from Australia and Brazil. Defending champion Vladimir Krutskikh, from Russia, was unable to attend, so by the end of the week there will be a new champion crowned.

With the wind at 12-15 knots and rising to 18-22 knots for the second race, it was a tough day for the Masters fleet, but the smiles as the fleet crossed the finish line said it all – satisfaction and elation after a great day of sailing, despite the aching limbs. 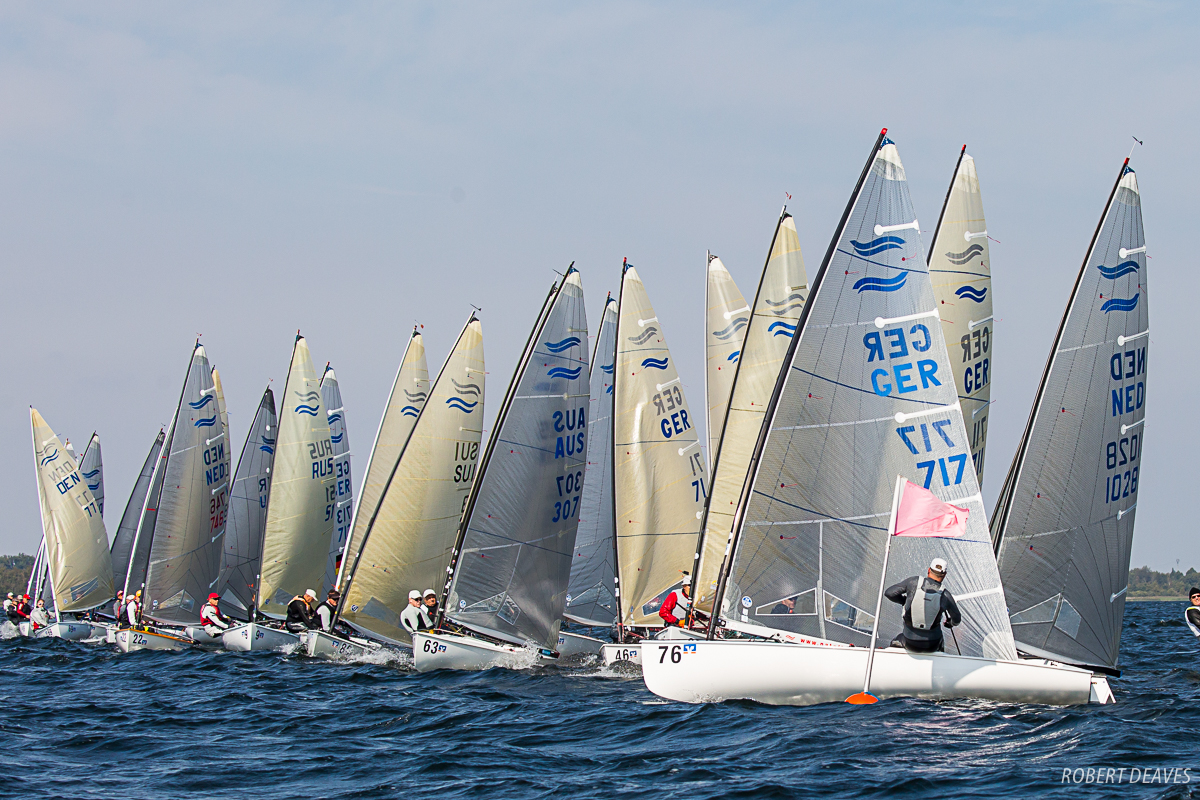 Silva was the early leader in Race 1, chased by the two Germans, Uwe Thielemann and Budzien. Thielemann took the lead on the first reach and led all the way to the finish to win from Budzien and Silva. However Thielemann was scored UFD, handing the win to Budzien, who is sailing on his home waters.

The wind increased for Race 2, with some great downwind sailing. Thielemann executed a fantastic port end start; well it would have been fantastic, but he picked up a second UFD. Thomas van den Berg, from The Netherlands led at the top from Ricardo Santos, from Brazil and the two extended on the fleet, with Budzien catching them up in the latter stages.

On the second lap the wind increased to 20 knots and apart from a few capsizes, the fleet handled the conditions well. Santos passed van den Berg on the final downwind to lead into the finish, but, with many boats on the edge of control, he then tried to take out the committee boat, though he inflicted more damage on his own boat. He rerounded and finished ninth, while van den Berg crossed in second, but was UFD, as was Budzien, which left Silva as race winner and overnight leader.

Overall it was a great start to the week with many boats sailing fast in the shifty and strong winds. Racing continues Thursday at 12.00, with six more races scheduled until Saturday to determine the 2019 champion. 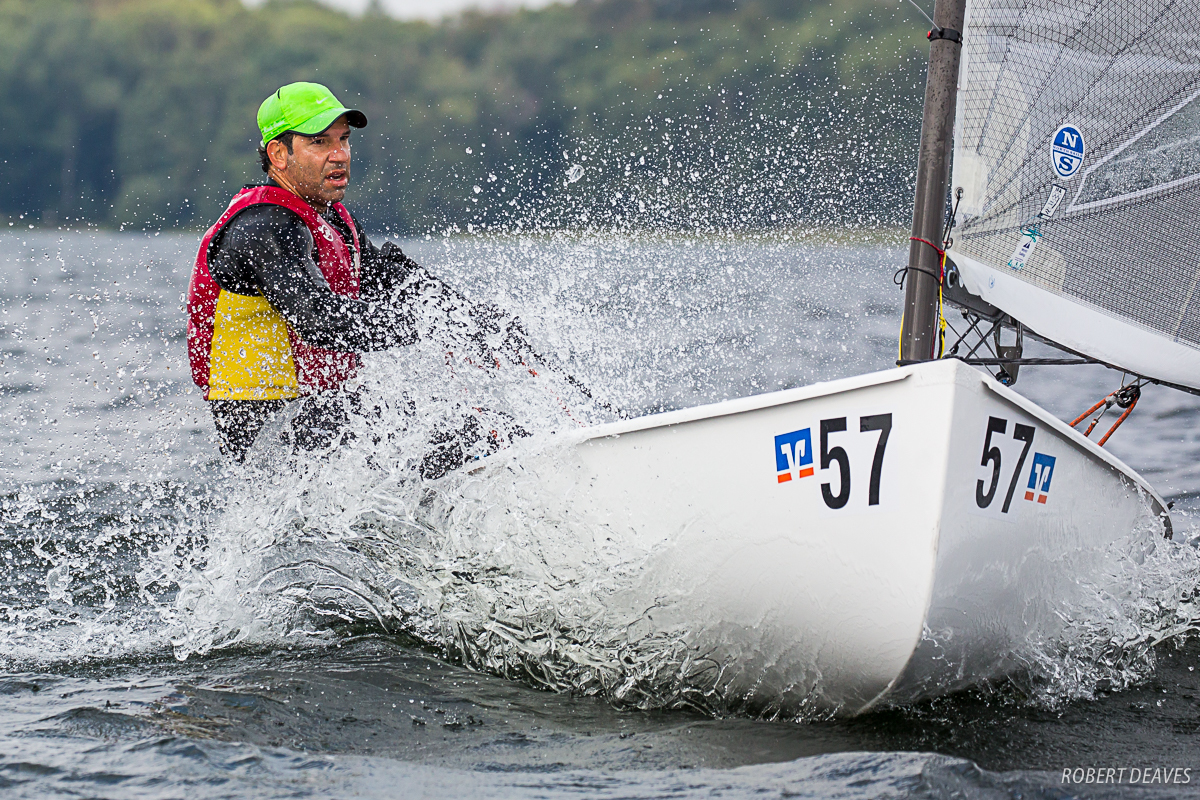 The Finn European Masters is a series of 8 races from Wednesday 11 September to Saturday 14, September. It is being sailed on Schwerin Lake in central Germany, and is organised the Schweriner Yacht Club.

Many more photos can be found here: www.flickr.com/photos/finnclassphotos 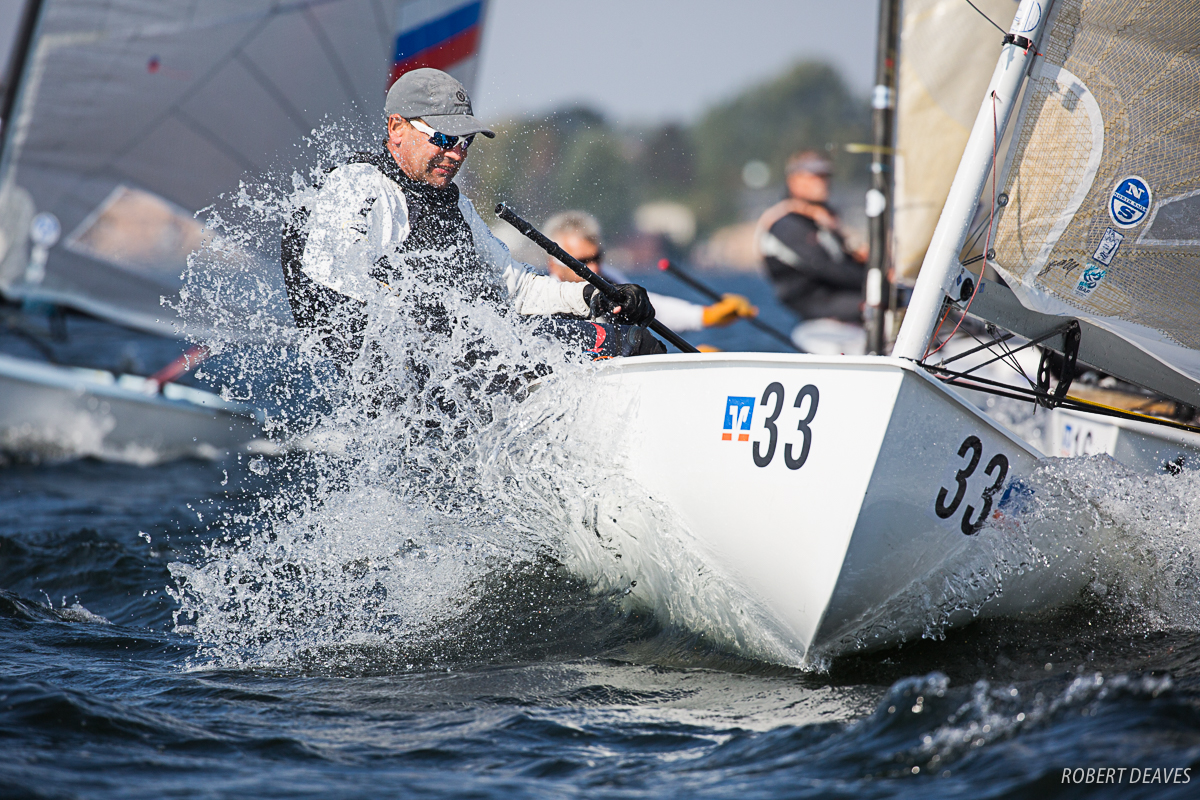 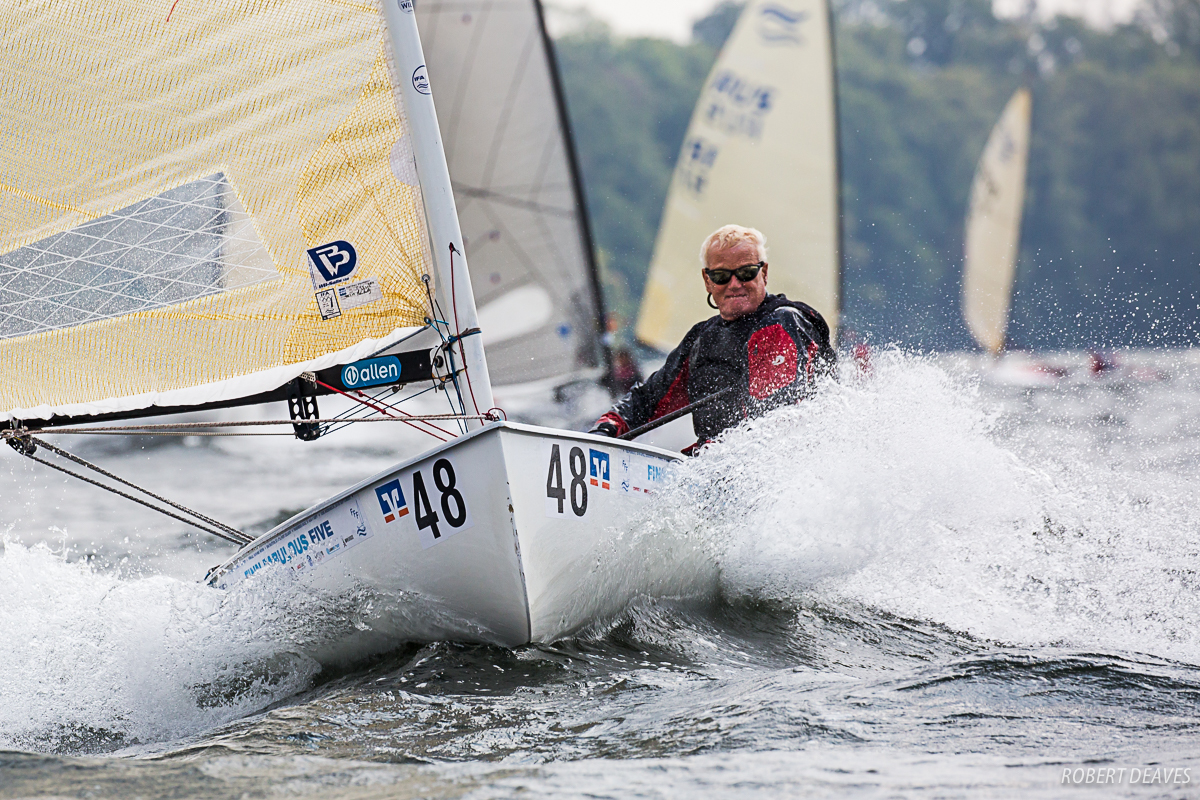 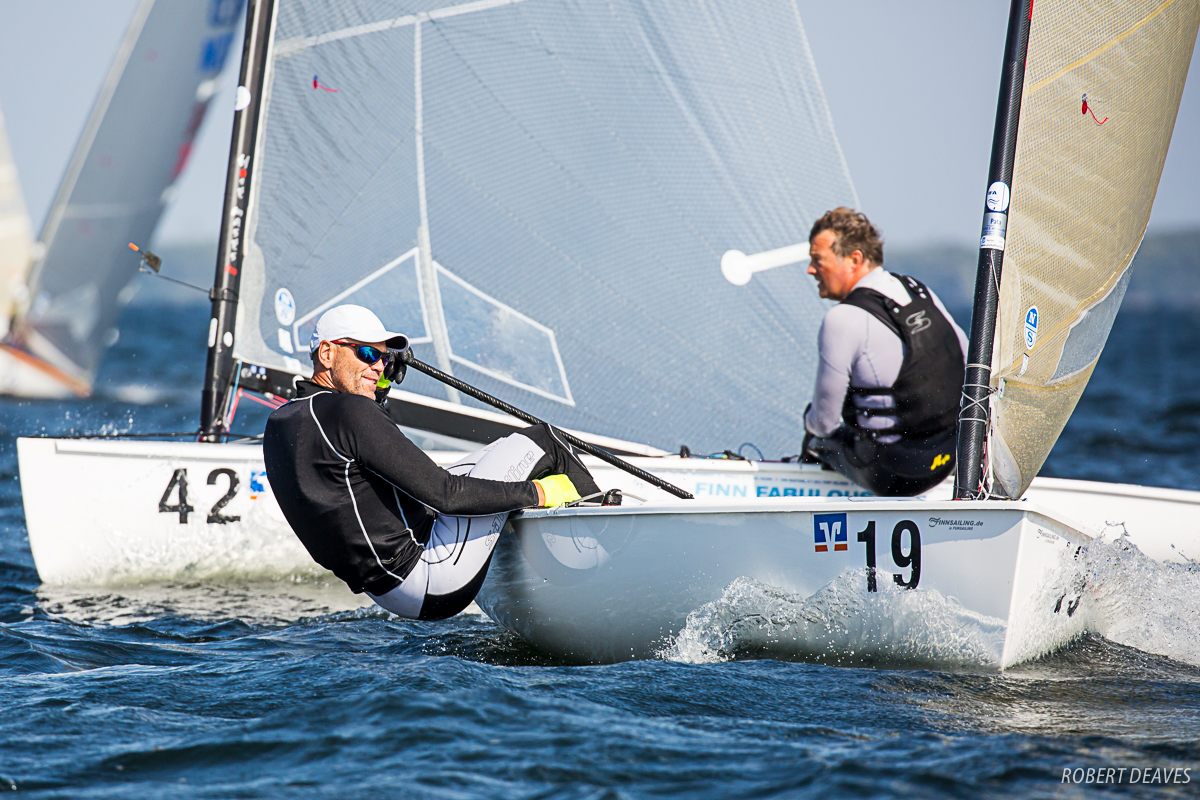