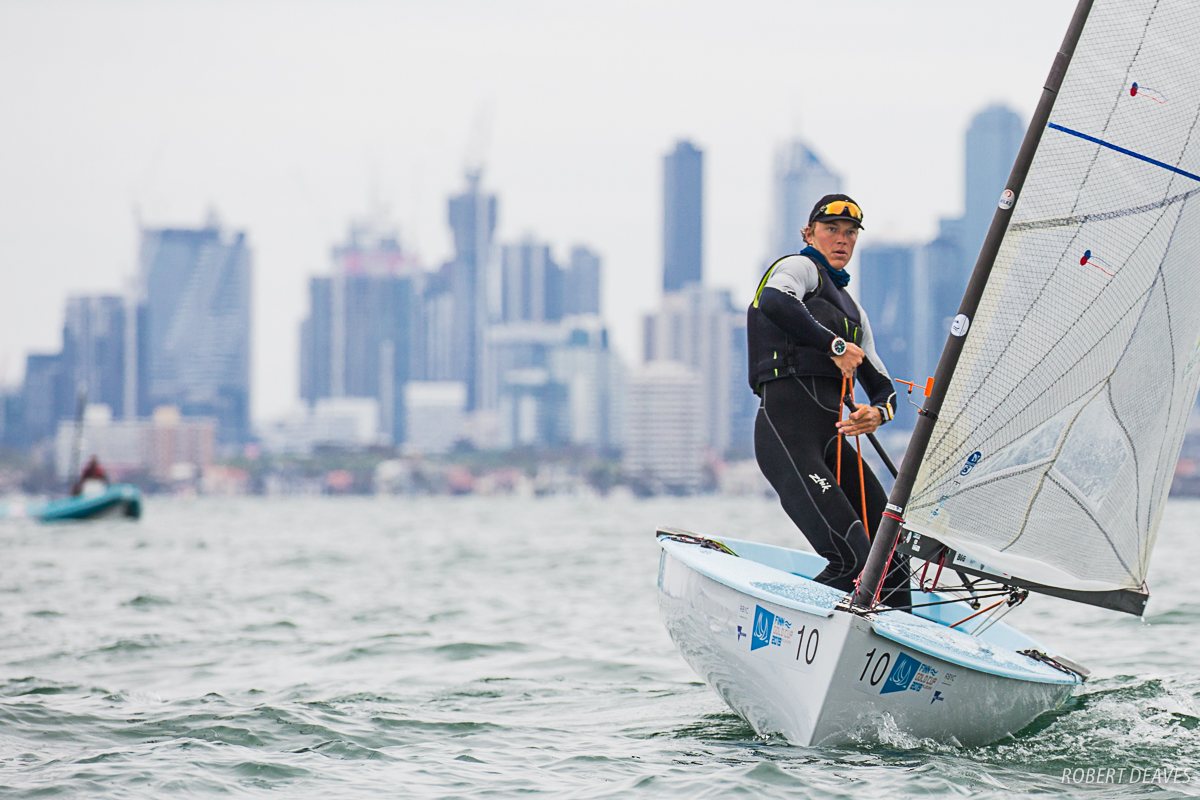 Christmas only comes once a year, but for one Finn sailor Christmas will come early this year, with one of the most prestigious and famous trophies in sailing there for the taking over the next six days at the 2019 Finn Gold Cup, sailed from the Royal Brighton Yacht Club, in Melbourne, Australia.

After weeks of preparation and training on Port Philip, the 62-strong fleet from 23 nations is ready for action. The training conditions have been awesome so far but are predicted to get even better as the event begins with a change to warmer and sunnier weather and reliable sea breezes. But it never pays to predict to far ahead in Melbourne.

The practice race on Sunday afternoon was sailed in a shifty 5 to 12 knots and as usual no one took it particularly seriously, but it marked the end of training and the start of the competition. While race leaders Nils Theuninck, from Switzerland and Markus Whitley, from Australia pulled out at the gate, Jesse Kylänpää, from Finland took the win from Mark Jackson, of Australia. 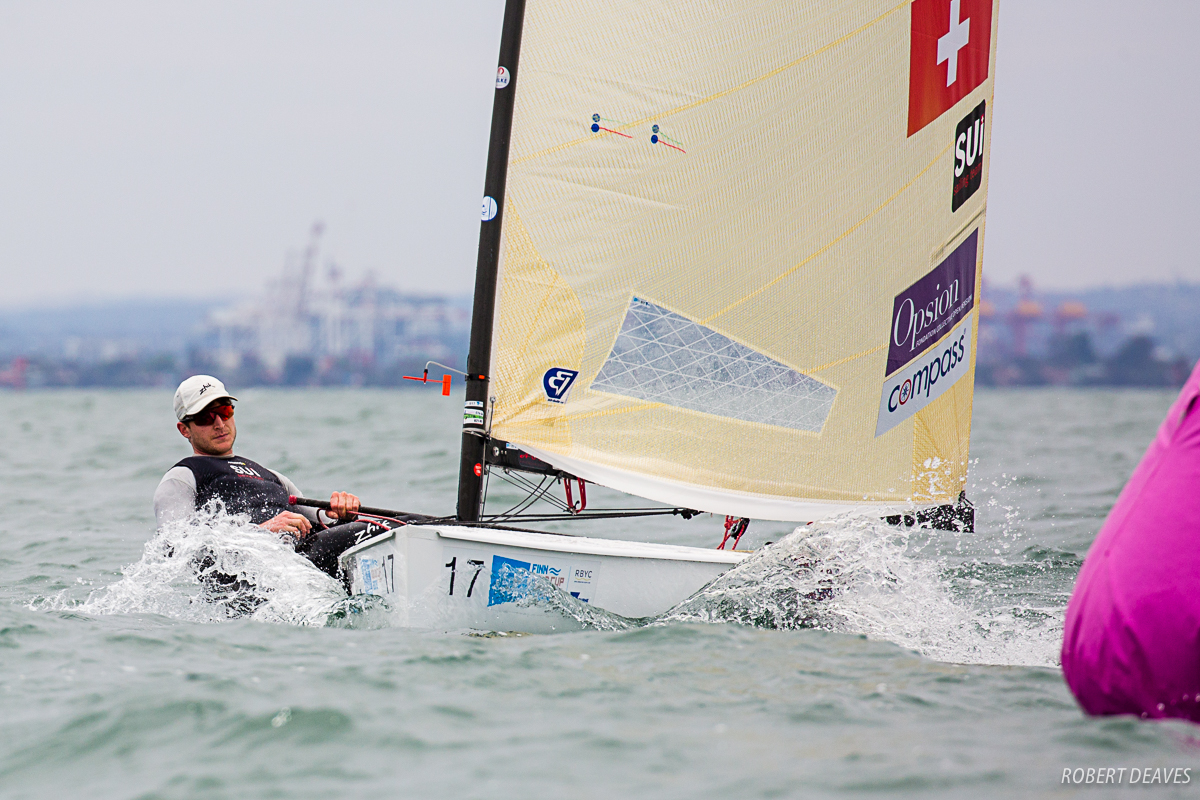 One of the favourites next week is Nicholas Heiner, from the Netherlands. He won the last major regatta, the Sailing World Cup in Enoshima, in August. A Dutch sailor has never won the Finn Gold Cup, but after a very close third in 2017 and a sixth in 2018, Heiner has got closer than most. Despite winning in Enoshima in 2017 and 2018, a major win still eludes him, though he has been threatening to take one for the last two years.

He has been enjoying the Port Philip conditions in the run up to the Finn Gold Cup. “We’ve done about 15 days training in total this year, plus time at the end of last year, so we’ve been here plenty over the years. It’s always been good. It’s a real treat to come here, with pretty efficient training and always a nice breeze.”

“The last two weeks have been glamour, not much light wind but everything between 6 and almost 30 knots, so it’s been good, and the last few days with an amazing thermally enhanced gradient breeze and nice waves, so definitely a good place for the Finn.”

“It’s a bit cooler than usual though. We had one day with 42 degrees and 40 knots out of the north, and it did a big switch to the south-west and within half an hour was 18 degrees and 52 knots, so definitely a place of extremes. This week has been cold and next week will be will be nice and warm for us.”

He said the training had gone well with many sailors taking part. “It’s actually quite nice to see a lot of different guys at the front and I think Nils made a good step up. He has been training with us and we taught him one or two things. But I would say everyone has been up there. No one has been dominating in training.”

One of the teams using the event for Olympic selection is the USA. The team here includes the 2016 bronze medallist Caleb Paine and young hopeful Luke Muller.

Muller said, “I came pretty early last month and just wanted to get comfortable here and I am glad I did. The first two weeks I was pretty useless because of the time change. But it’s been really great to line up against everyone who has shown up, and just trying to really get comfortable in the conditions. It was a big priority for me to be prepared here and feel good and just feel at home.”

As is usual in the Finn class, the sailors have been training together on the water, but over the last few weeks the group has been growing, with practice starts organised most days. “It’s been really collaborative with everyone organising together the night before. We’ve had between 15 and 30 guys on the start line at once in training so it’s really been good to simulate what kind of starts we’re going to have and you get to line up alongside everyone you want to. It’s been great.”

“Rafa [Trujillo, the Australian coach] has been starting practice races and everyone has joined in. I think everyone has quite liked it.”

“When I first came it was 12-13 degrees and raining and really windy. But Melbourne has been treating us well since and hopefully it will continue. It looks like the forecast will be great.” 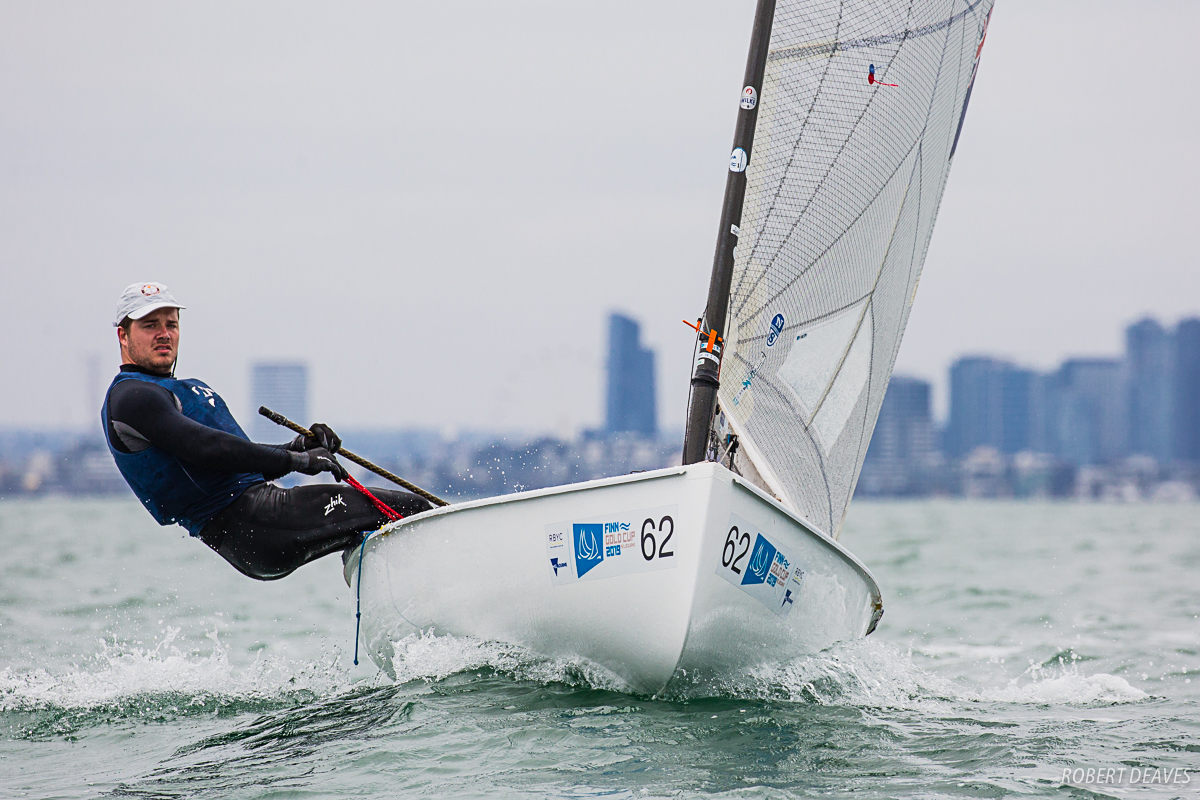 A Kiwi sailor has also never won the Finn Gold Cup in the 64-year history of the event. Two sailors who could well change that next week are Andy Maloney and Josh Junior, who have both been on top form all year. Earlier in 2019, Maloney won the Trofeo Princesa Sofia in Palma and the World Cup Final in Marseille and is relishing the chance to challenge for the Finn world title.

Maloney has not competed in the Finn since the test event in August but says they are prepared.

“We had a good break after Japan and we’ve been back in the boat a month or so now, so I guess it’s the start of another season for us and it’s the world championship. The Finn Gold Cup is a pretty special trophy and I think for me that’s a great incentive, so to try and win that trophy is a pretty cool opportunity.”

The pair have just finished a second week of training, with a week in between back in Auckland for “work”.

“We’ve done quite a bit of practice racing here now and it’s been pretty nice conditions so far. Usually some pretty good chop and waves and really close acing. And pretty decent shifts no matter what the breeze is, so definitely a fun race course trying to sniff out the shifts, and trying to do it better than everyone else.”

Racing is scheduled to being at 13.00 on Monday 16 December 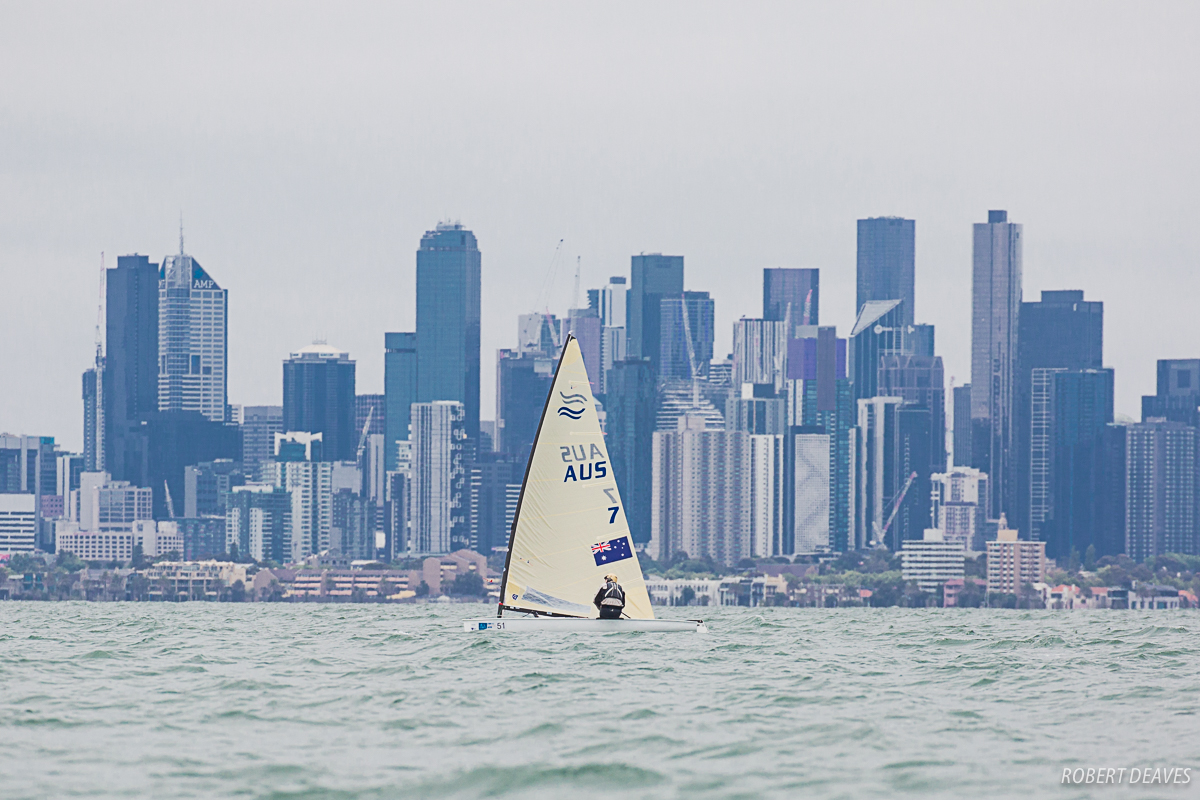 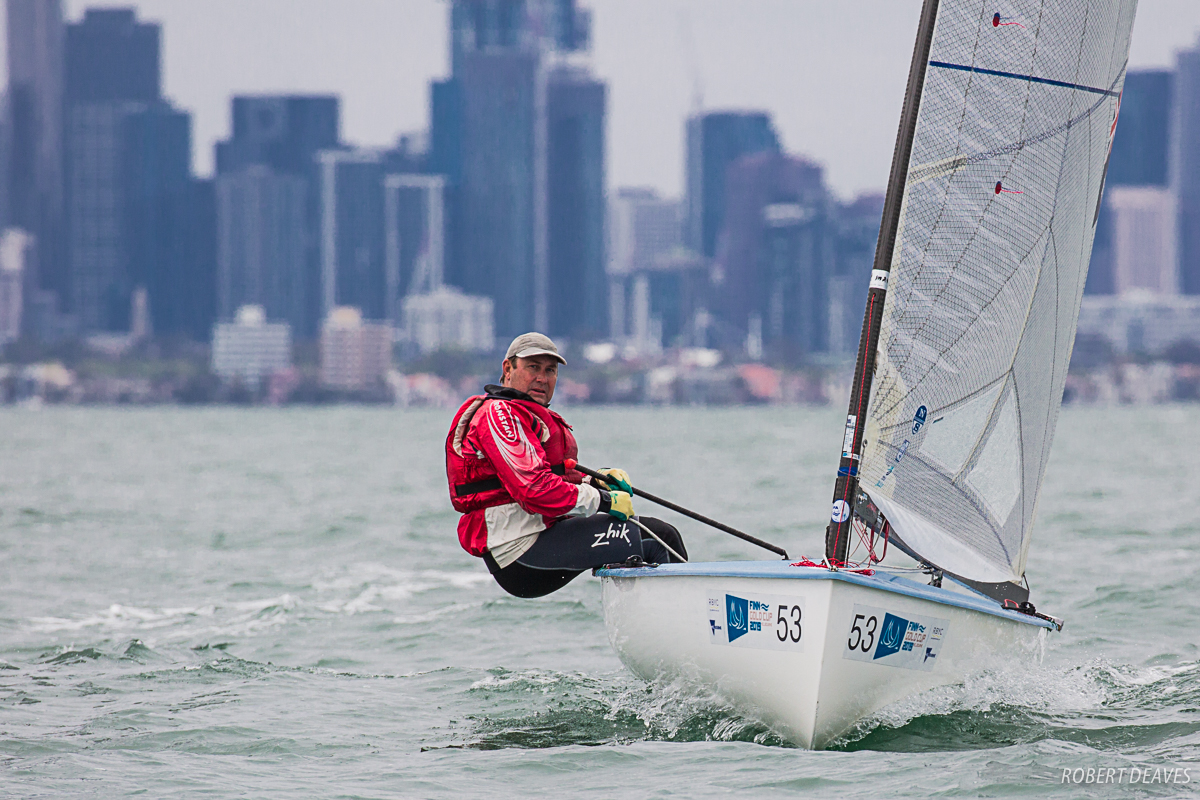 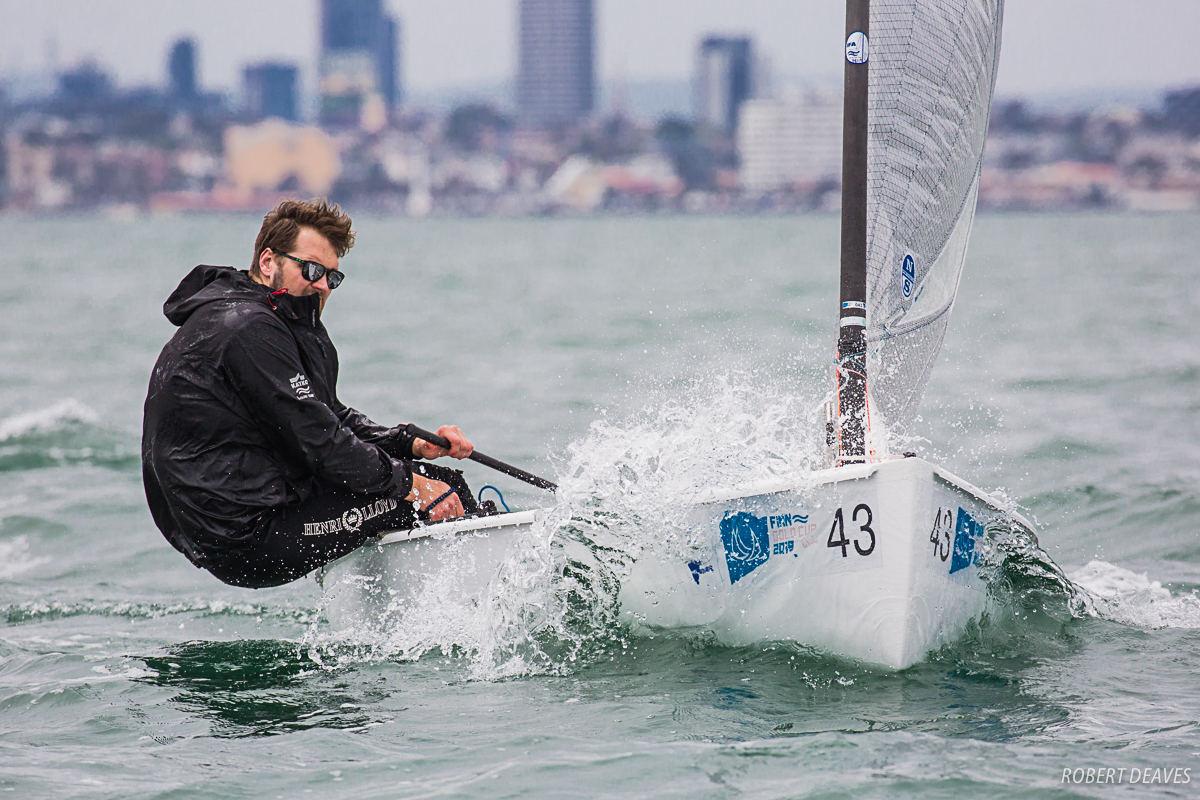