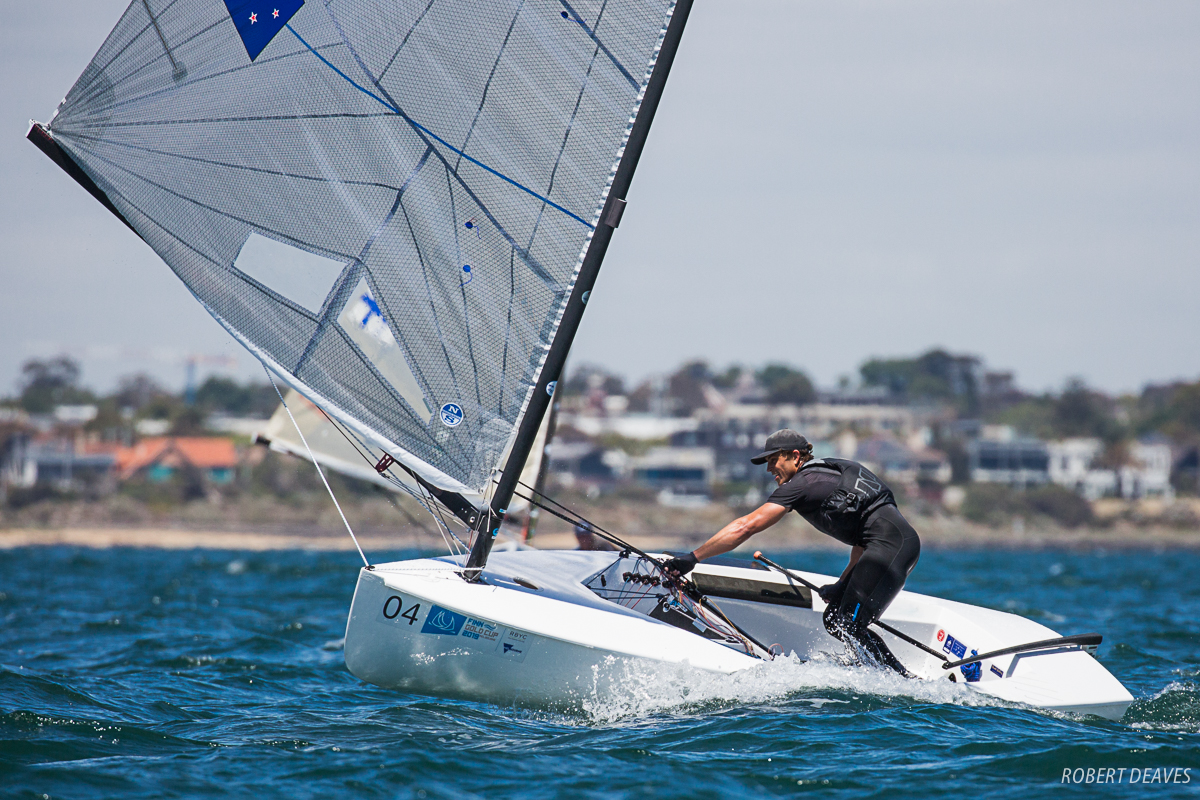 Andy Maloney and Josh Junior, from New Zealand, share the early lead at the 2019 Finn Gold Cup in Melbourne, Australia after two races on Monday, the first day of the championship, with a race win and a fifth placing each. Nenad Bugarin, from Croatia sits in third.

The day began wet and overcast but improved through the day to leave a pleasant 8 to 12 knot breeze on Port Philip, with clearing skies and for many here the first real taste of summer with rising temperatures and blue skies.

The 60-boat fleet got two races in after an hour delay to give the breeze a chance to fill in and by 2 p.m. the first race started in a 9-12 knots southerly breeze which later settled around 10 knots. 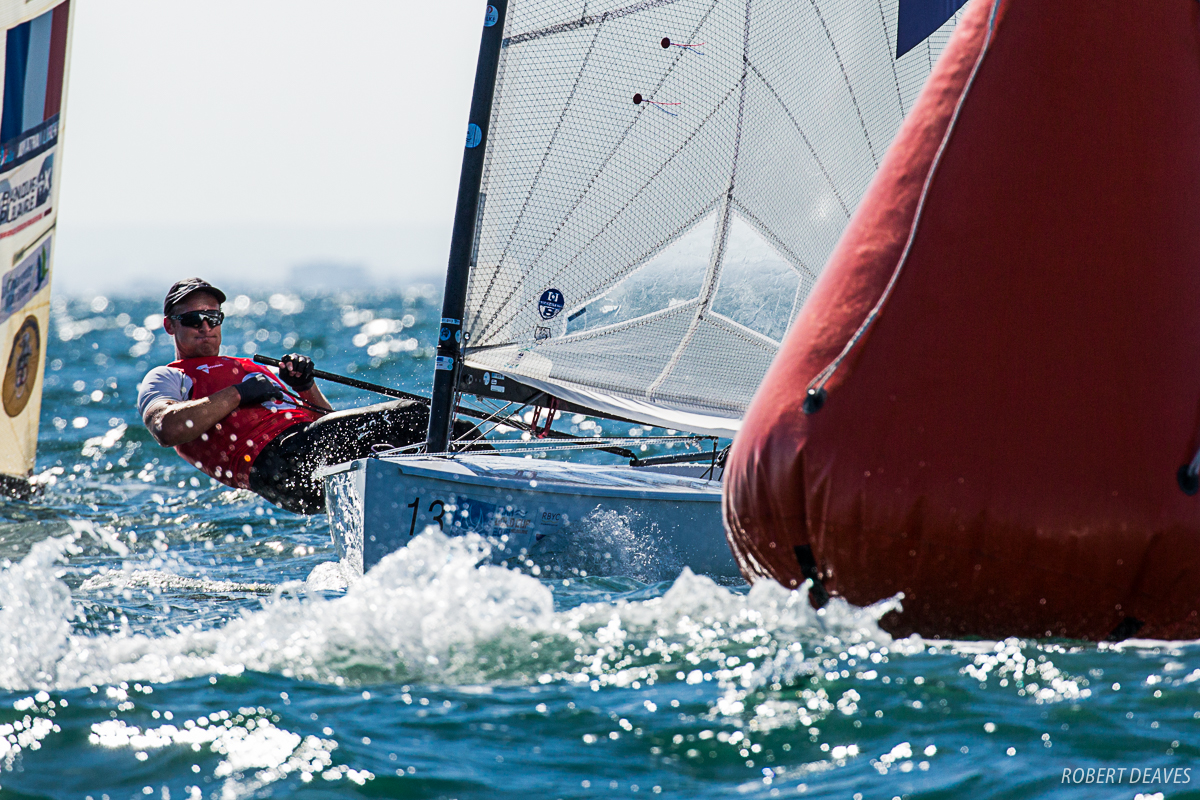 Race 1 got away first time with Spain’s Joan Cardona and Alejandro Muscat leading the fleet. Junior had a mixed first upwind, but gradually pulled through to challenge the leaders, rounding the second windward mark in second place, and then moving ahead on the final downwind to take the win from Muscat and Cardona.

It took two attempts to get Race 2 away, but the fleet got away cleanly in a slightly reduced breeze. Maloney led throughout the race with Croatia’s Bugarin and Milan Vujasinovic, Fabian Pic from France and Nicholas Heiner, from The Netherlands in the mix just behind. Maloney took a confident win from Bugarin and Heiner.

“For me, it was a really good day and I like these conditions with 8-9 knots. In the first one I was lucky I could tack immediately after the start and developed good speed and from there I was fighting for the race with Joan and Josh till the end and finished second, which was really good. And then on the second race I started at the committee boat and I didn’t have the best start but I managed to find a good line and go all the way to the left and I managed to take a couple of shifts and rounded the mark in the leading group.”

Spain has not yet qualified for Toyo 2020, but they are pushing hard. “For the last year Joan and I have been training together and we have been pushing really hard and now in Greece we were close and now we keep pushing. I was injured in the summer and couldn’t train and didn’t go to Tokyo, but we started training again in October and we hope that we will sail well in Genoa and qualify the country.”

“For us it is important to do well here but we only have rented boats and gear here and we came just five days early for the regatta. For us it was just important to race, and of course as be as good as possible and try to get a good foundation.” 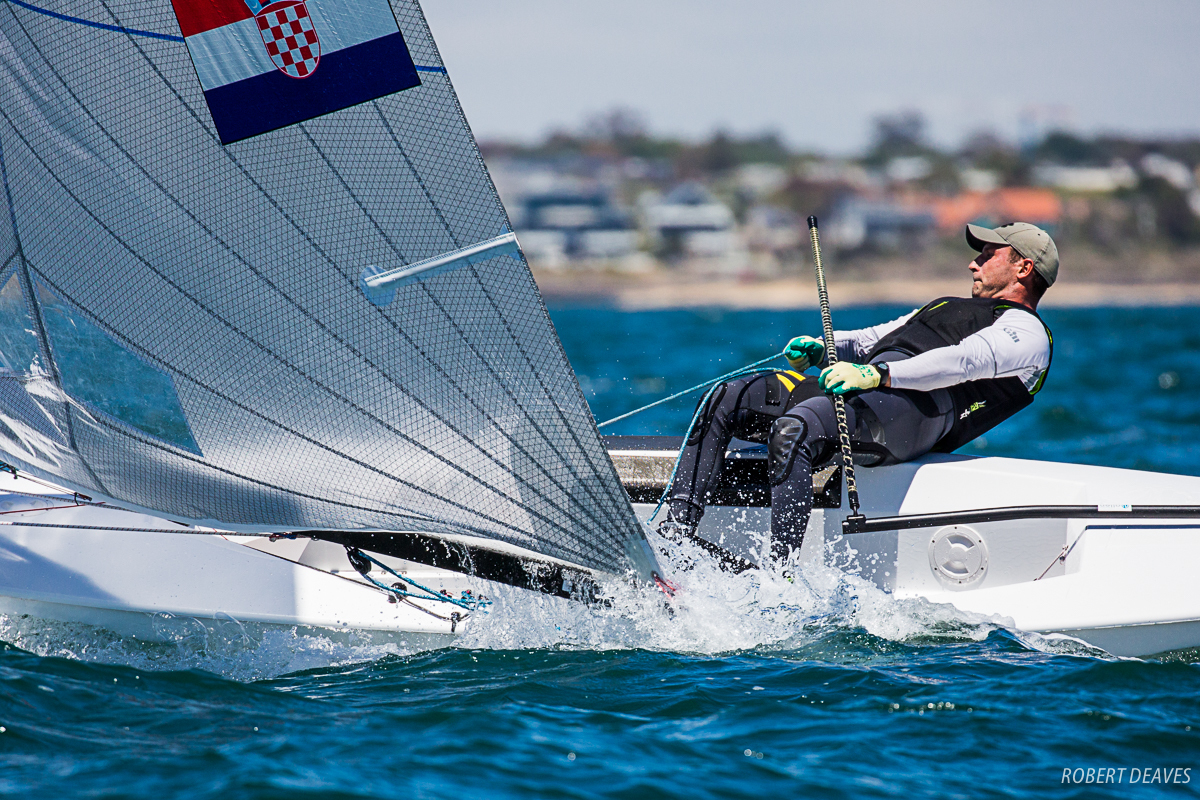 Bugarin is back in the boat after working with world champion Zsombor Berecz, from Hungary, over the summer.

“I was helping Zsomby in Japan, because he didn’t have anyone else to help him, so I was assisting him. It was a good opportunity for me to learn from the opposite side, so now I came back to the boat and we did a couple of months training in Greece. We had beautiful conditions there so we learned a lot from each other and actually I think we prepared well.”

He sits in third overall

“It was a nice day for me with beautiful sailing conditions. I did two good races and everything was fine on the water. I had good starts and good speed and also good speed downwind, so most of the things I put together, so I am quite happy after the first day.”

At the top after the first day, Maloney and Junior have showed they are a force to be reckoned with at this Gold Cup.

Maloney said, “It was a good day of sailing with a nice southerly filling in. We had one free pumping downwind and the rest was without and I was going really nicely out there.”

“In the second race I had a good start near the boat end and there was a live of pressure just to the right of me that I managed to hook into and stayed in the right place for most of that beat and then it went a little bit back left up the top after being pretty much right for the whole beat. I managed to lead around the top and keep the fleet behind me.”

Junior added, “In the first race I think Andy and I both rounded the top mark in the late teens. It’s a lot trickier than it looks out there. You think one side might be favoured over the other but the wind was definitely shifting back and forth so I think we both found ourselves near the back, so we both had a good couple of downwinds and sailed ourselves through. We both ended up with good races.”

Talking about the great start to the regatta for both of them, he said, “The goal is always to win, but there is a lot of racing to go for both of us so we just need to keep chipping away and every day hopefully get better and better.”

The 10 race opening series continues until Friday, with the final race and medal race scheduled for Saturday 21 December. 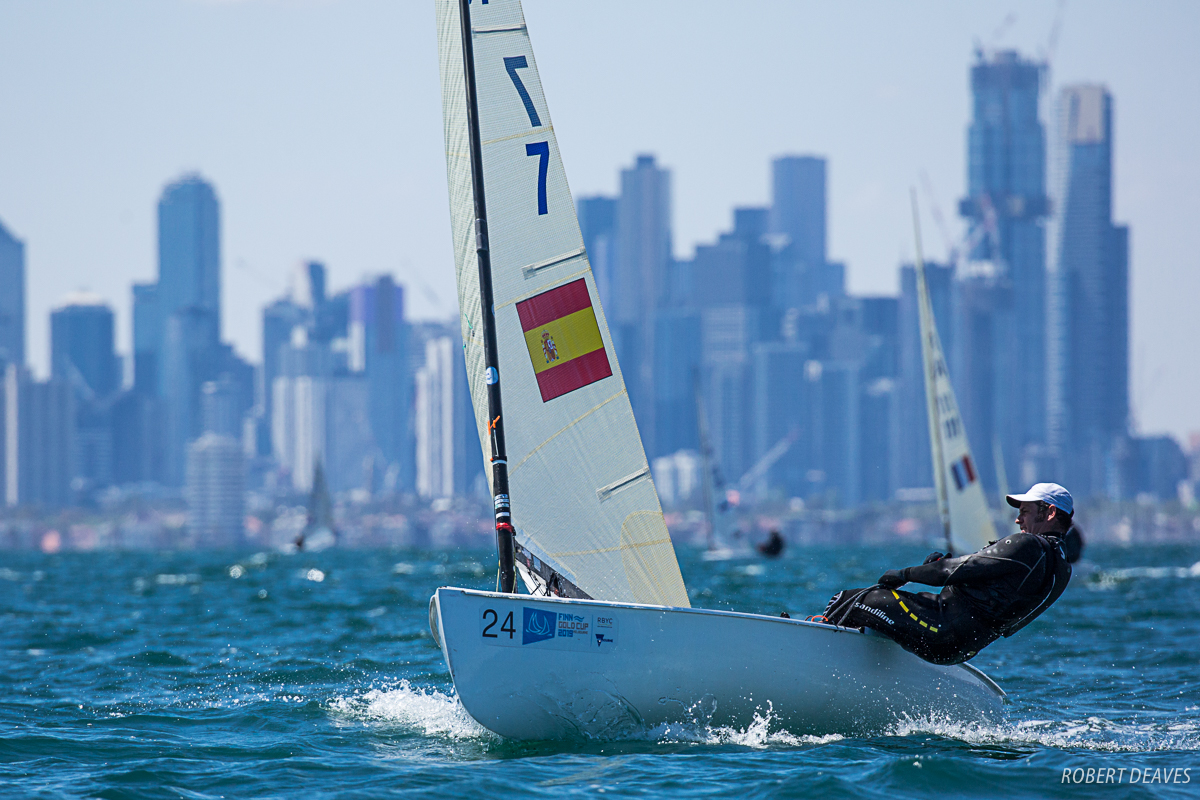 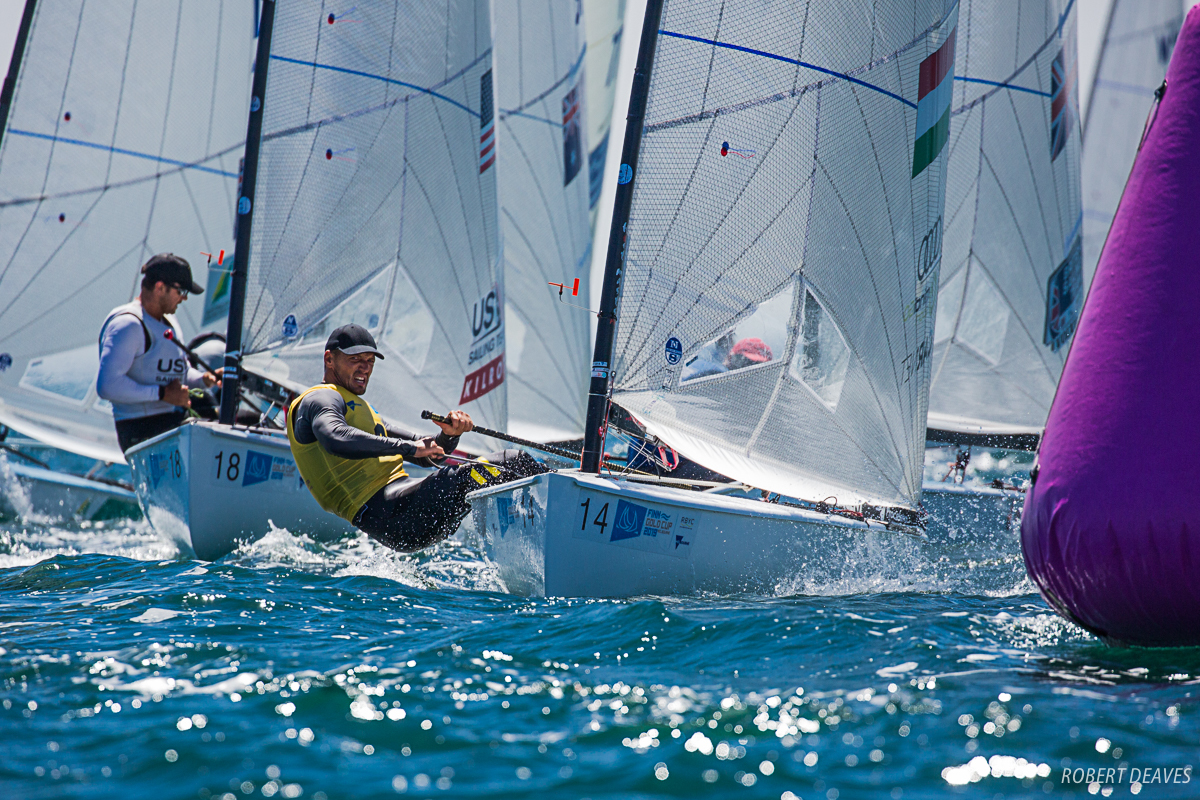 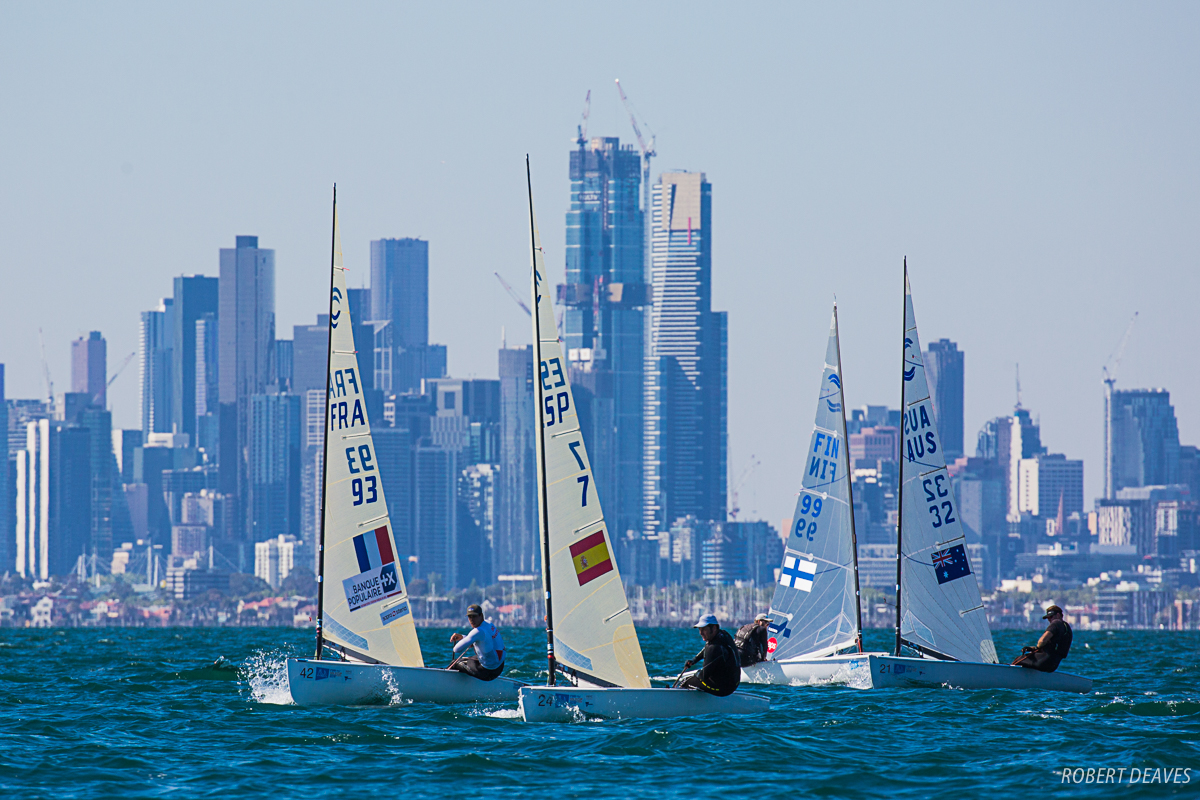