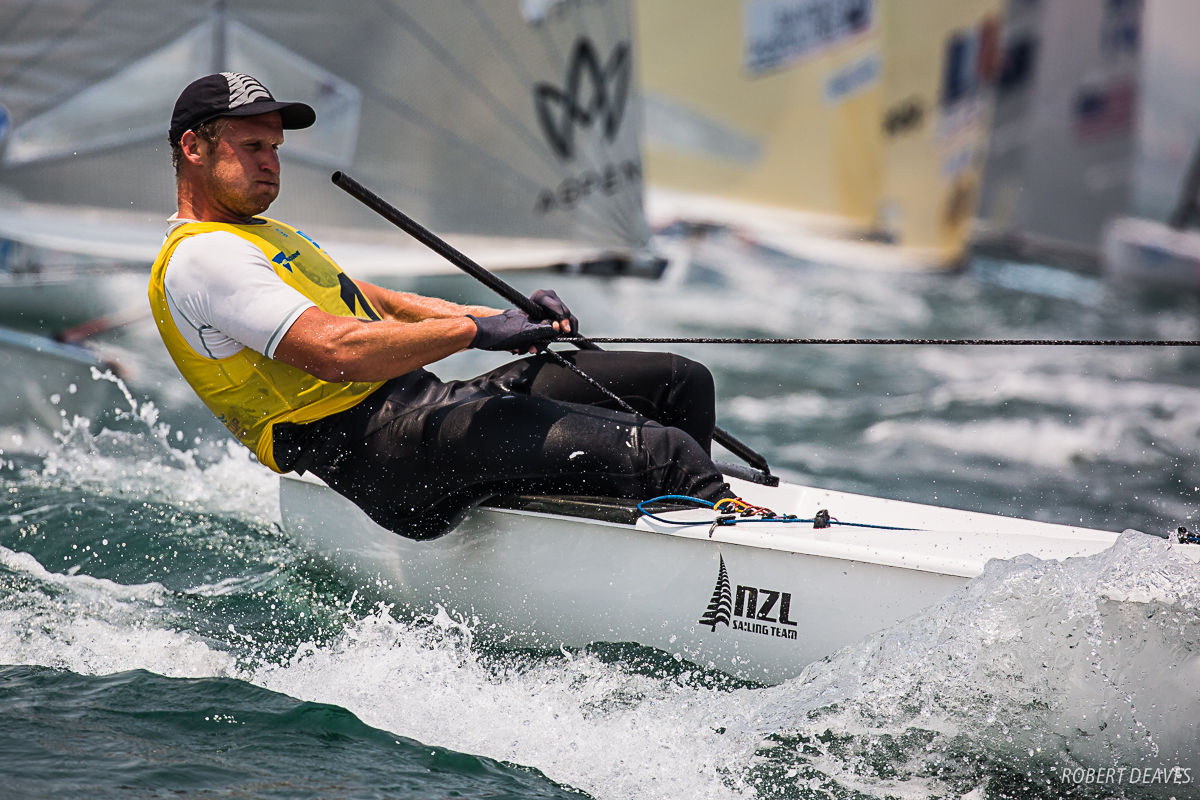 The battle for the 2019 Finn Gold Cup has come down to New Zealand’s Josh Junior and The Netherlands’ Nicholas Heiner. Junior will take a 16-point lead into Saturday’s medal race to spar off against Heiner for the gold medal. The other podium places will be decided between Hungary’s Zsombor Berecz, Brit, Giles Scott and Kiwi, Andy Maloney.

Each day in Melbourne has thrown different conditions and different challenges at the fleet of 60 Finn from 23 countries. The final day of the opening series, brought another change with shifty, northerlies and extreme high temperatures. The fleet launched after a short postponement into a 15 to 20 knots of very hot wind. It was cooler than the shore, which reached 44 degrees, but the heat took its toll on the fleet as two out of the schedules three races pushed them to physical limits.

It was one of its hottest December days on record, with most of Port Philip obscured with dust and haze, and the competition was equally scorching hot with the shifty conditions playing havoc with the established pecking order this week. 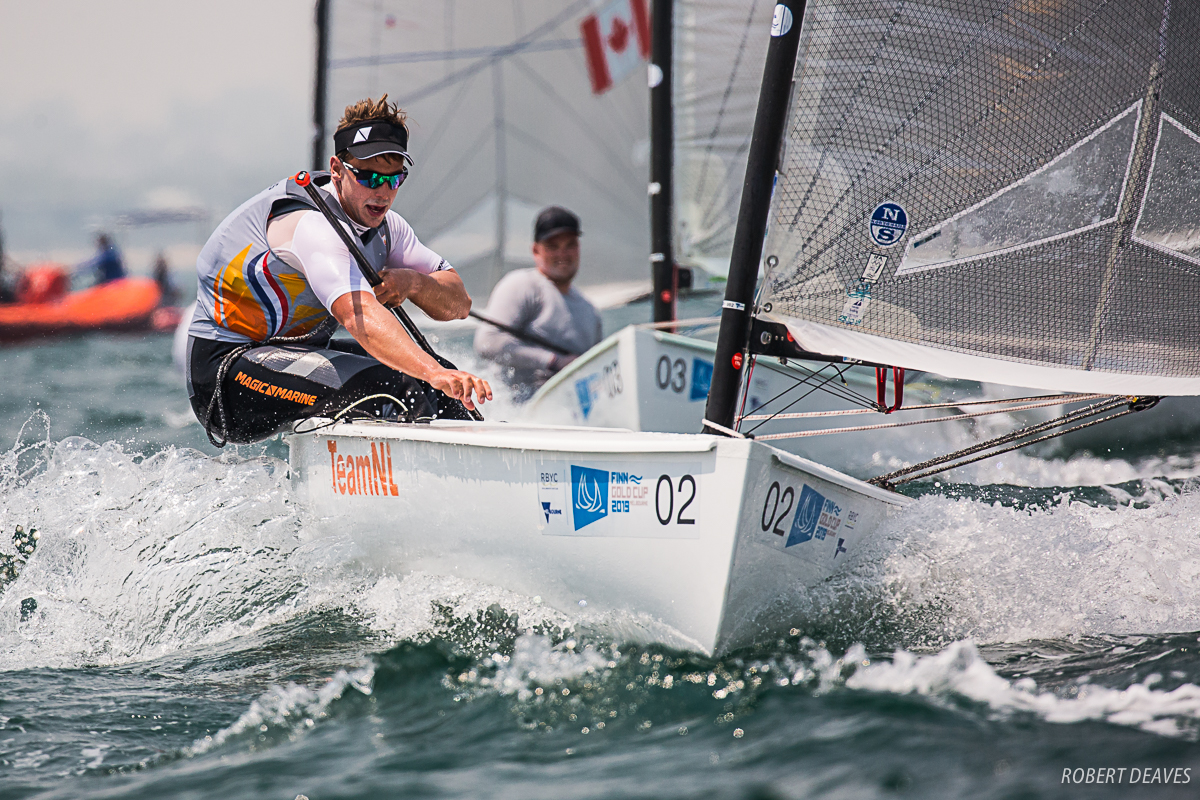 Berecz won the first race of the day, leading the race from start to finish. He battled throughout the first lap with Britain’s Ed Wright, who dropped back to seventh at the end, while Australia’s Jake Lilley had his best race of the championship so far and finished second. Ondrej Teply, from Czech Republic, followed in third following his best race of the week. Regatta leader, Junior as well as fellow Kiwi Andy Maloney, put in their highest scores of the opening series finishing 16th and 21st respectively.

Race 9 also got underway the first time in 13-15 knots with Spain’s Joan Cardona leading at the first top mark ahead of Australia’s Oliver Tweddell and Heiner. By the bottom gate Alejandro Muscat, from Spain, had taken over the lead with Turk, Alican Kaynar, in second and Cardona back in third. Kaynar built his lead at the final top mark to take out the race win with Cardona crossing in second ahead of Heiner. Lilley finished fourth ahead of Muscat in fifth.

The regatta leaders made hard work of the race. Junior rounded the top mark just outside the top 10 with Scott and Berecz some way back. While Junior moved up to eighth, Scott couldn’t do better than 17th with Berecz recovering better to cross 13th.

An attempt was made to start the third and final race, but the wind was becoming increasingly unstable and had dropped to 8-9 knots with big wind shifts. After 30 minutes waiting, further racing was abandoned. Most of the sailors were pretty relieved to come ashore, where ice lollies and ice baths awaited them. 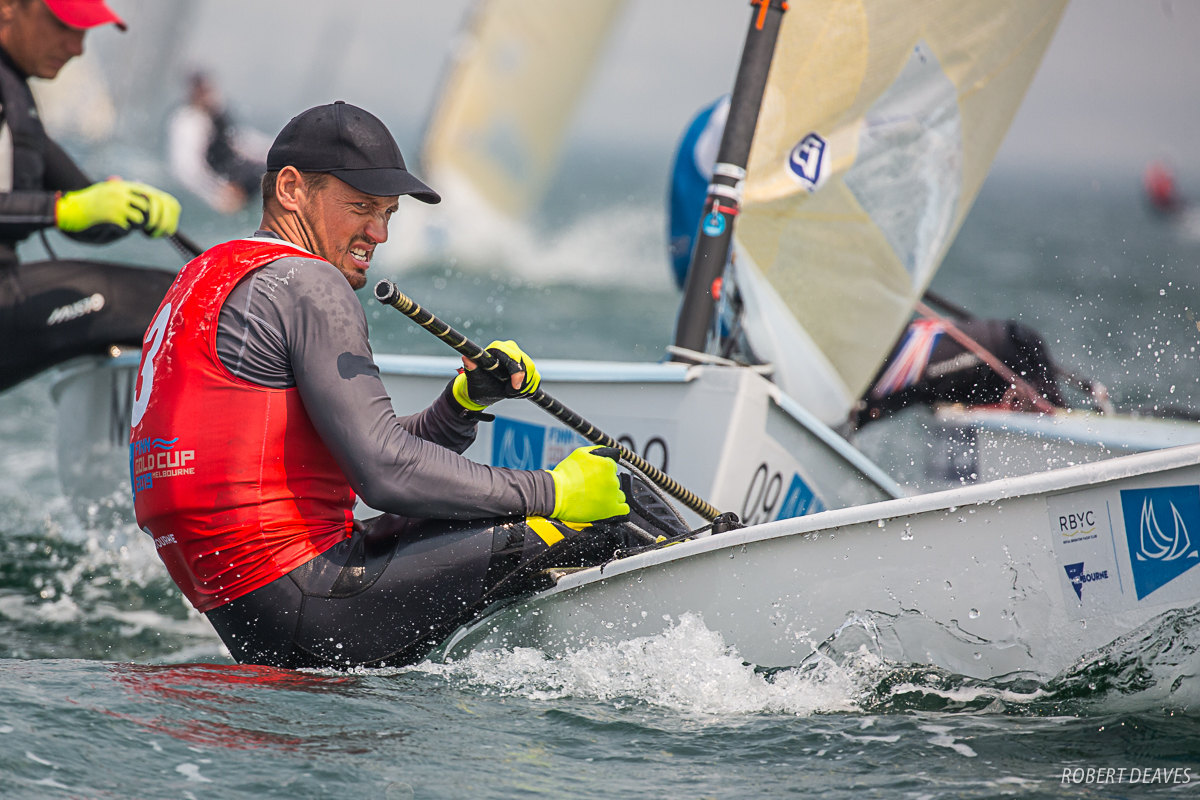 After scoring a 16, 8, Junior explained his day, “We went out there in nearly 40 degree temperatures and ended up with a very shifty 15 knots that slowly died off during the day. For me it was pretty tough. I really struggled to find my grove and find the shifts as the wind wasn’t doing what you’d expect, but I ended up moving further ahead, so pretty happy with that.”

Did nerves play a part? “I guess, but it’s like any other day. You go out there and race your best. It was very tricky but I just kept trying to do what I could do.”

On tomorrow, “I think we are expecting a strong onshore breeze so that’s going to be a lot of fun. I’ve got a decent gap back to second and it’s pretty close after that. I think all I have to do is go out and have a decent race and I should be alright, but we’ll see how it goes.”

Heiner had the second best day of anyone on the water with an 8th and a 2nd.

“It wasn’t too bad out there. It was hot on shore but in between races I was almost cold. Definitely it was the right sport for the heat. On the water it was actually pretty nice, especially upwind with the waves coming over it was quite refreshing so I think we were the lucky 60 that were out sailing today.”

“I had a really good day, pretty consistent at least, so no big results. So that was good. I was really hoping for a third race but it is what it is and the medal race is tomorrow and all to play for. I know Josh will probably match race, but I just need to have a good race tomorrow and we’ll see.”

If Heiner expects a match race, he should remember that Junior is a New Zealand match racing champion.

The top Australian sailor will be Rio 2016 Olympian, Jake Lilley, who not only secured his place in the medal race today with a fleet best score of 2, 4, but also wins the Tokyo 2020 Continental qualifier place for Australia.

He described the day, “We had a pretty funky northerly wind today which really heated things up for everyone. I got on alright and finished with a two and a four so really happy with that in the tricky conditions.”

“It’s really tricky when it’s blowing off the land here. It’s really hot and there is a lot of dust in the air and the wind shifting all over the place and when you get a good feeling and a good vibe for it, it makes it a bit easier.”

“We’ve got the fires and everything in Australia so there’s a lot of dust and stuff in the air, the throat is a bit dry and it’s 44 degrees. It makes it tough but I think that brings out the best in this class. I’m sure everyone enjoyed it and we all had great racing and you can’t ask for much more.”

“Going into the medal race tomorrow there’s still plenty to fight for but I also qualify Australia automatically for the continental spot so it’s good to get that job done.”

The 2019 Finn Gold Cup concludes Saturday with the final race for everyone except the top 10 scheduled for 12.00 and the medal race for the top 10 starting soon afterwards. With a strong onshore wind forecast it is going to be a great battle and a great show.

But whatever happens, at the end of Saturday the Finn Class will have a new World Champion. 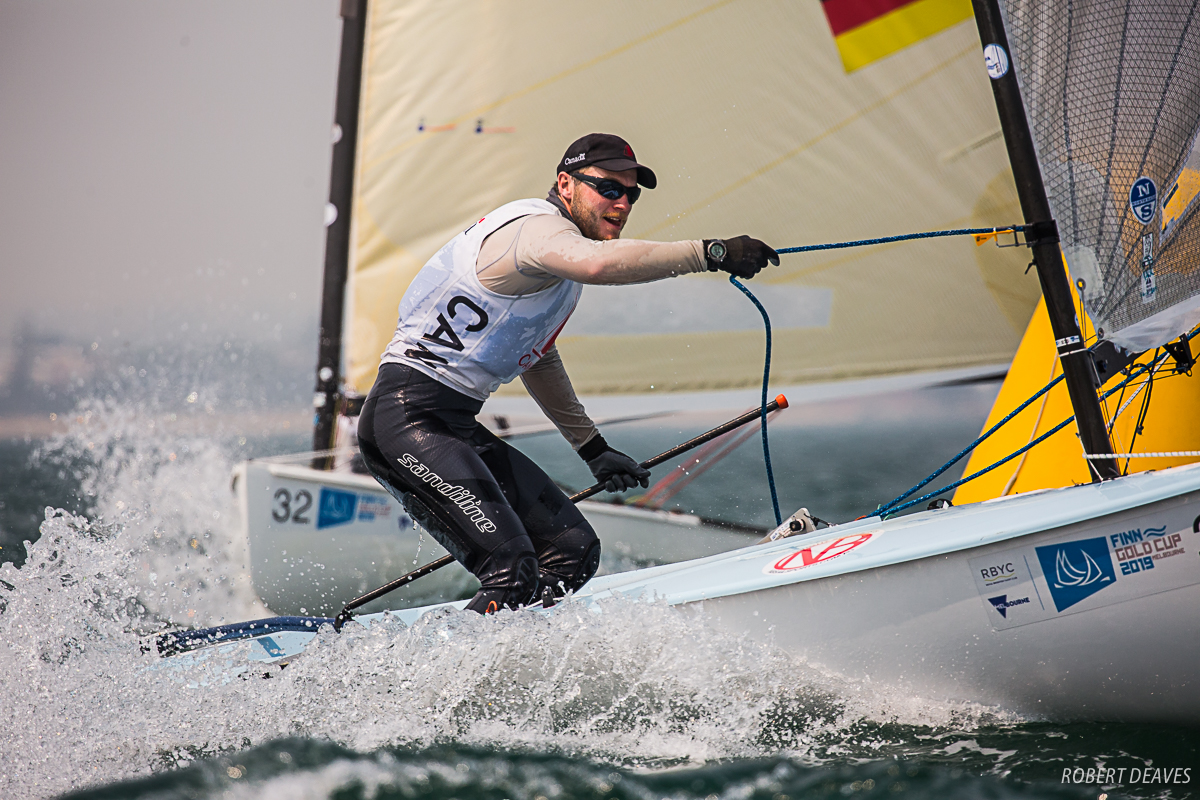 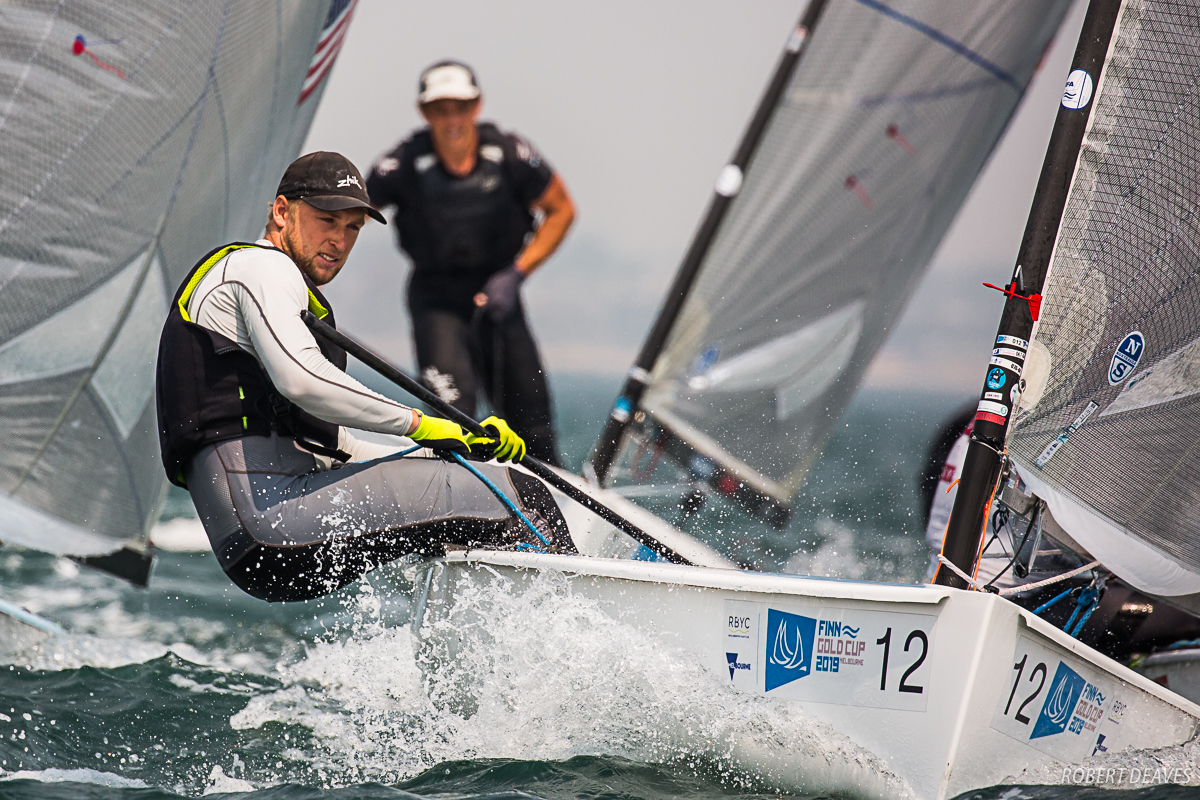 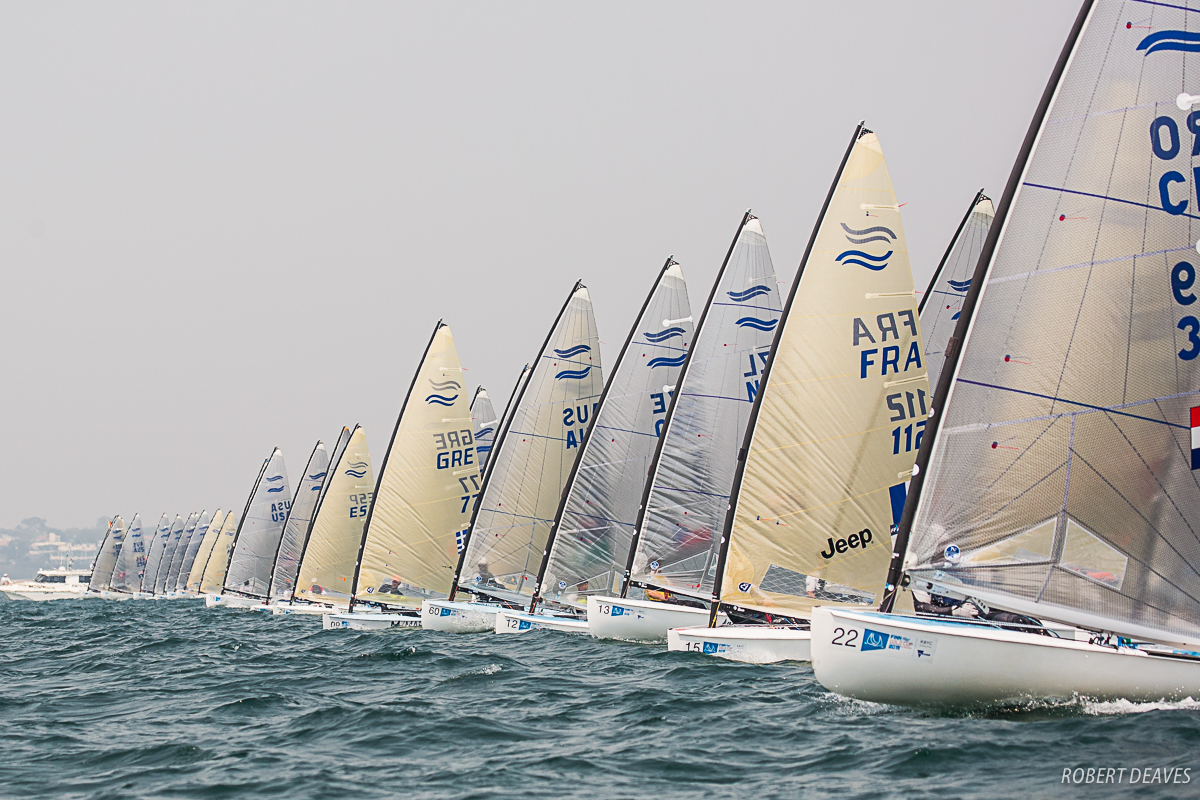