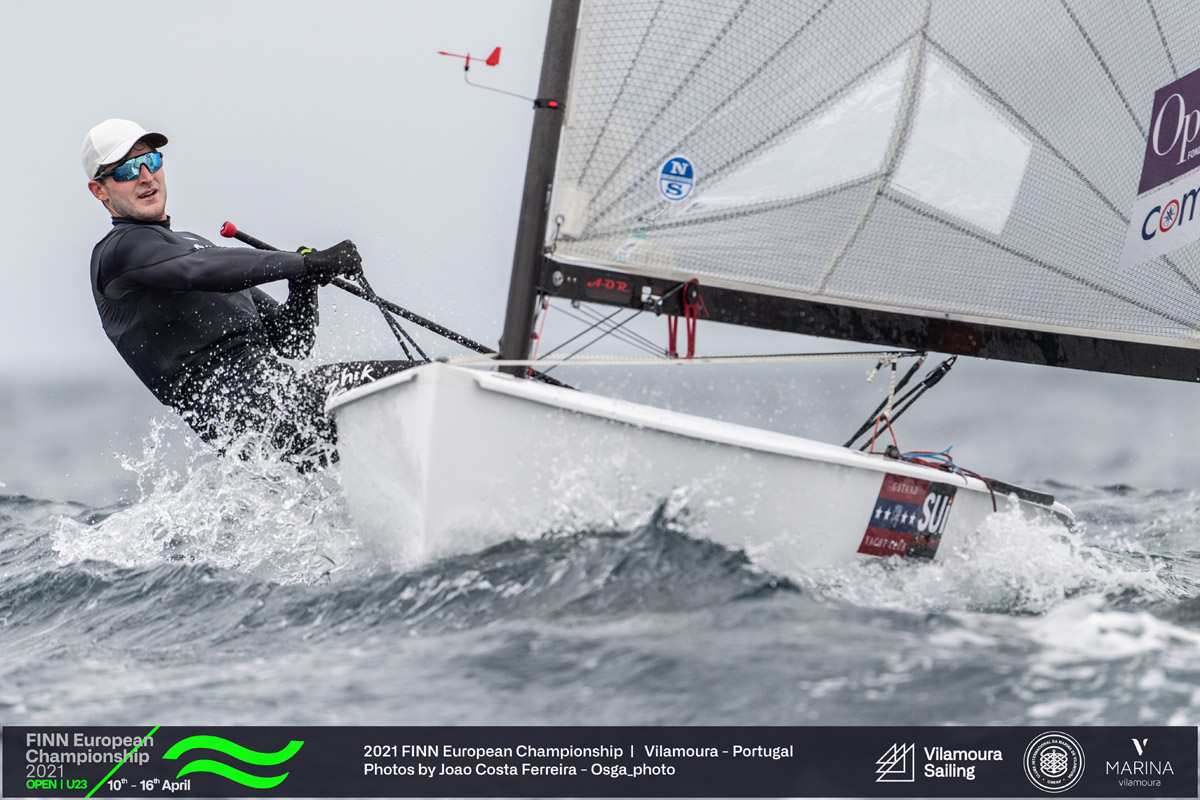 Fortunes changed for many on the third day of 2021 Open and U23 Finn European Championship in Vilamoura, Portugal, after two more races in great conditions, yet as tricky as ever. Hungary’s ever consistent Zsombor Berecz is back on top, while Britain’s Giles Scott jumps from ninth to second. Overnight leader, Joan Cardona, from Spain, drops to third after a tough day. The race wins went to Nicholas Heiner, from the Netherlands, and Scott.

Both Cardona and Heiner picked up black flag disqualifications on a day when, again, many high scores were added to the leaderboard. With the discard also coming in after the fifth race, and many other high scores, Wednesday was a definite moving day.

However the standout performance of the day was from Switzerland’s Nils Theuninck with two amazing second places that takes him up to fourth on equal points with Cardona.

Theuninck is one of round 25 sailors here who will be competing at the Finn Gold Cup next month for the final available place at the Olympics in Tokyo.

“I’ve been sailing the Finn since 2017 and I enjoy every day of it. I am improving all the time and my results are getting better and better. However, for me, as for many other young Finn sailors, losing the Finn at the Olympics also means losing our Olympic dream altogether as no other Olympic sailing classes are suitable for our bigger body physiques.”

He is fully aware it could be his one and only chance to get to the Olympics, but remains hopeful the Finn is reselected in place of the offshore keelboat.

“Definitely I feel like this generation of young sailors are slowly becoming the best in the world, and there’s only one spot left for the Tokyo Olympics. So for 2024 I am really hoping to see all these guys sailing alongside me in the Finn in the next campaign.” 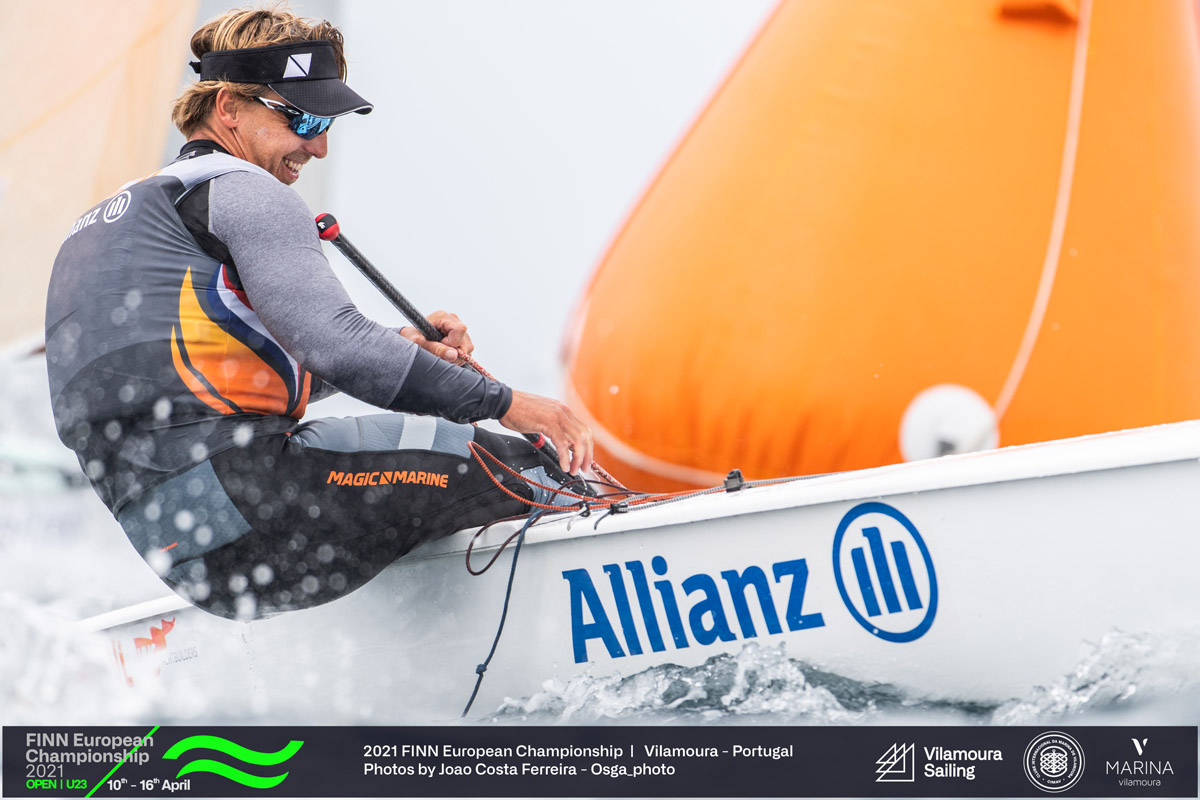 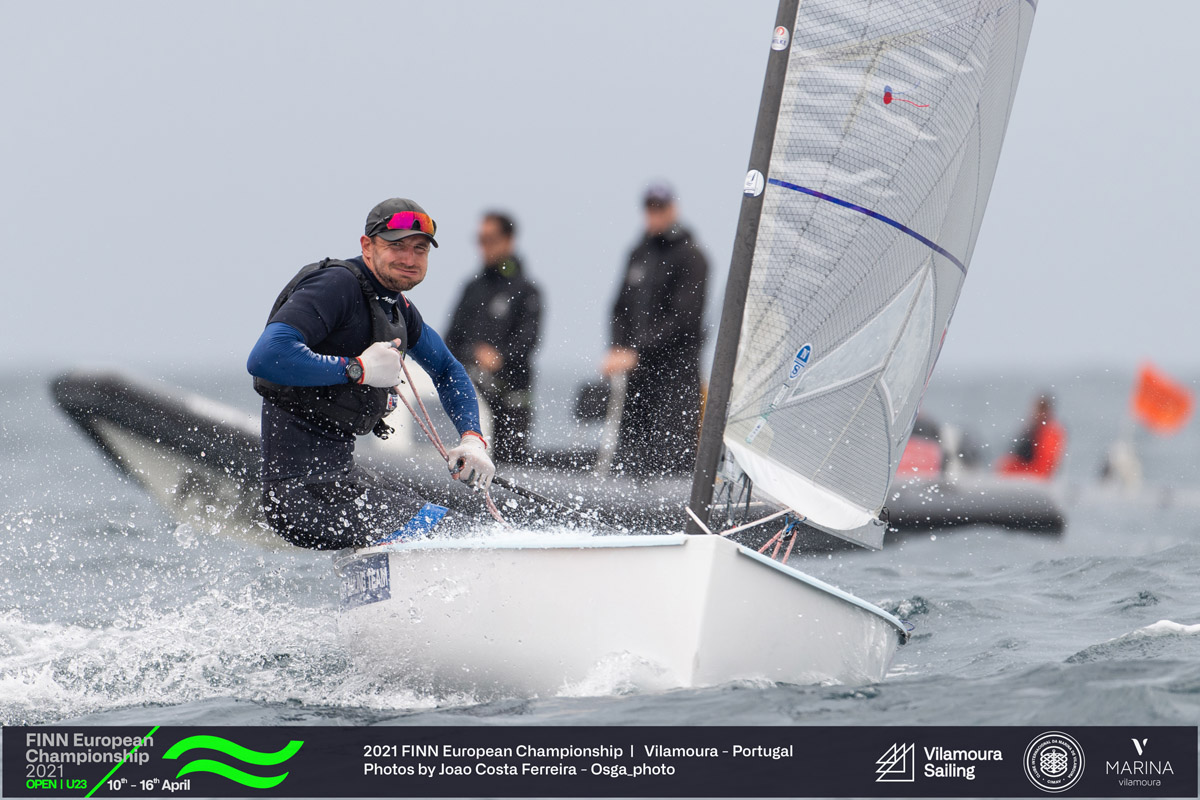 Wednesday’s races were held under cloudy skies with a breeze varying from 8-15 knots, that varied a lot across the course area. There were also numerous recalls, postponements and black flags as the fleet struggled to get underway.

After two failed attempts Race 5 got away under black flag in around 8 knots in a big left shift. Two boats were BFD, including regatta leader Cardona.

After the start the wind gradually turned to right with increased pressure and for those who started at the boat end or took a step up, things got better and better. Ukrainian, Georgii Paches led round the top from Italy’s Matteo Iovenitti and Ioannis Mitakis, from Greece. The wind was up to 12 knots and with free pumping downwind Mitakis extended to the gate while Oskari Muhonen, from Finland, moved up to second. With Paches in third, Heiner was up to fourth from Theuninck.

The final beat was a game changer. Many headed back to the right, which looked good for a while, but then the breeze started to go left. Mitakis was playing the middle with Heiner and they saved their positions, but many on the right suffered and many on the left gained. Mitakis still led at the top from Theuninck. Heiner went more to the right downwind and found enough pressure to take the lead and win his second race win of the week from Theuninck and Mitakis.

Race 6 started with another high profile casualty, after several attempts to get the start away, with Heiner jumping the gun on a black flag.

Scott headed left and already had a nice lead at the top from Russia’s Arkadiy Kistanov and Oisin Mcclelland from Ireland. As the fleet set off downwind, there was a significant wind difference down to the gate, where it was down to 7 knots, giving the leaders an advantage as they rounded.

Scott maintained his lead and extended again to the left of the final beat, though the right side also paid for many, including Facundo Olezza, from Argentina who moved up to third behind Theuninck.

The pressure dropped again on the final downwind, but Scott won easily from Theuninck, with another big gap to Olezza. 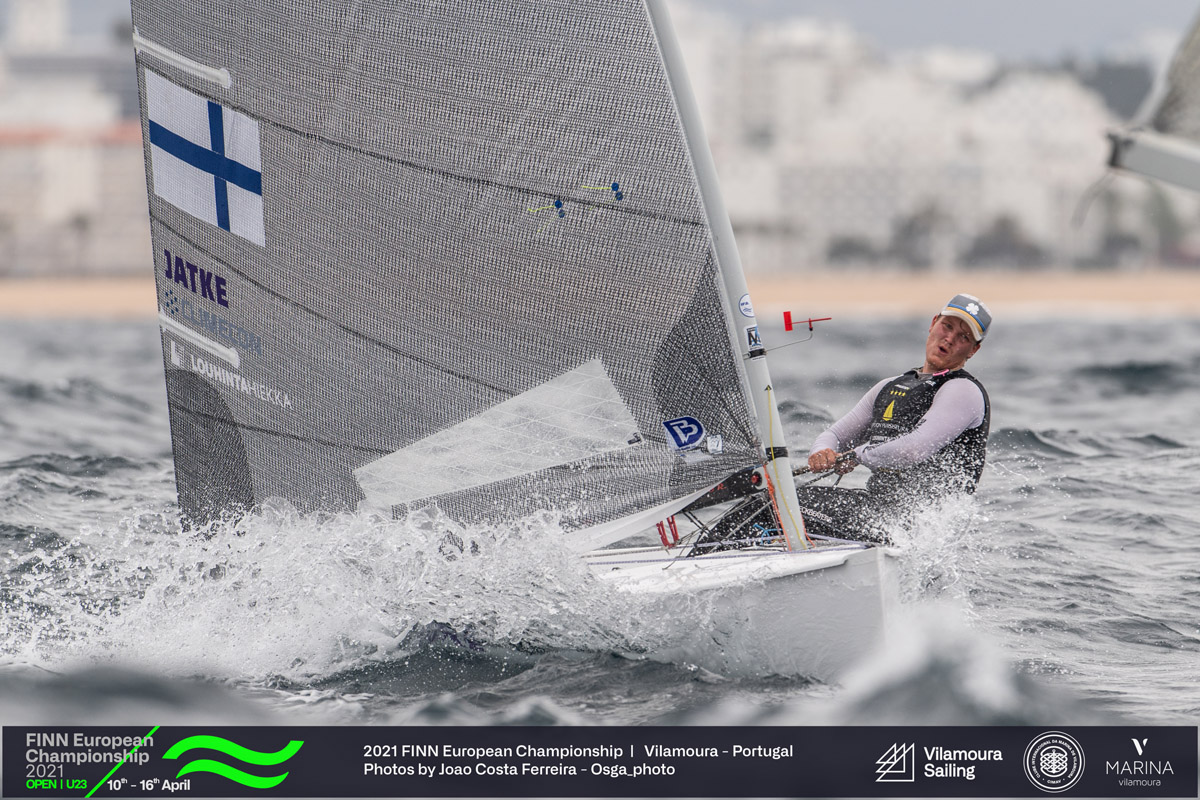 “Today was all alright. I didn’t find all the shifts but I think the speed was good and especially the downwind speed, so I came back pretty well.”

Current U23 World Champion, he is still hoping to qualify for Tokyo, and loves sailing the boat.

“I really enjoy the physical side of Finn sailing, especially downwind free pumping, but also the way you can trim the boat so well and get the rig working so nicely upwind. I think it’s a really great boat.”

The decision to review the offshore keelboat event in Paris 2024 and possibly open a way back for the Finn gives him hope for his future in Olympic sailing.

“I think the keelboat was way too expensive, and it’s looking like a really great chance for the Finn to get back in the Game. That would be really great because we love the physical side of sailing the boat and we have a very good generation of young sailors that won’t make it to this Olympics so would be fantastic to have another chance in Paris as well.”

Olympic champion Giles Scott is fresh from back from the America’s Cup in New Zealand where he was tactician on INEOS Team UK. He has put together a mixed bag so far, but the win in Race 6 was classic Scott.

“I’ve been out of the Finn for about six months now, but now the focus is on the Olympics. It’s 99 days away, so it really is just around the corner and I especially have not got too much time. So were really into it and we have a great group, so it’s a bug push for the next three months.”

He explained what makes the venue very difficult to manage.

“It’s been a super tricky week so far. I think the guys who have managed to put in the consistent series have done really well. We are racing in one fleet on a big course of 1.3 to 1.4 miles, and that makes tricky venues even more tricky. If you get on the wrong side it’s hard to come back and a few of us have felt the pain of that during the first six races. So I am expecting a very difficult four more races to get through.” 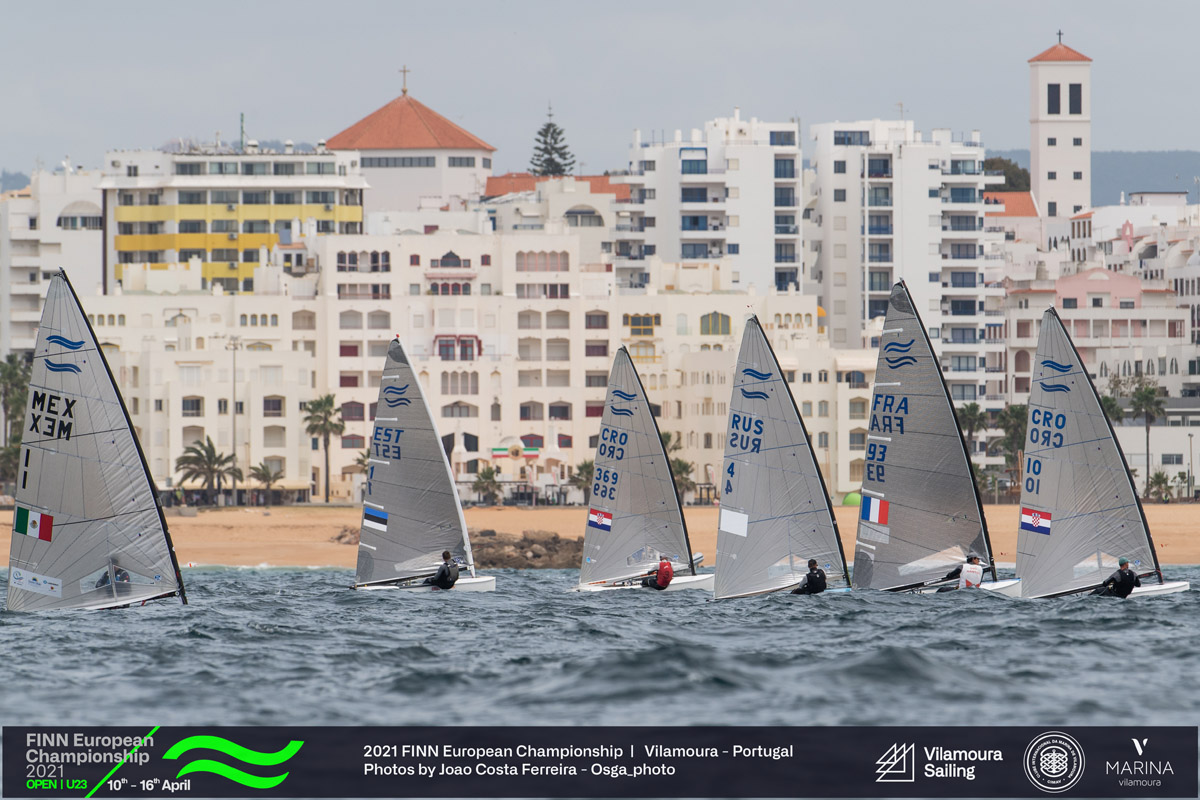 Theuninck was delighted with his performance.

“I had a really good day, with two seconds, so very happy about that. We had really nice conditions with 10-15 knots, some good waves. There were some amazing surfs on the downwind and it was very physical on the upwind, so I really enjoyed that.”

Going back to the looming Olympic decision, “I’m obviously happy with the decision of the IOC to not keep the offshore event. For me the Finn is the ultimate sailing boat; it requires excellent racing abilities alongside being very athletic and having technological expertise.

“The Finn is the best boat to represent athletic young sailors and it’s the best pathways towards professional sailing teams as we can see by having so many Finn sailors involved in the America’s Cup or SailGP and other circuits. As for now the battle to keep the Finn Olympic is not over, so I will keep pushing to make it happen.”

Racing in Vilamoura is scheduled to continue at 12.00 on Thursday. 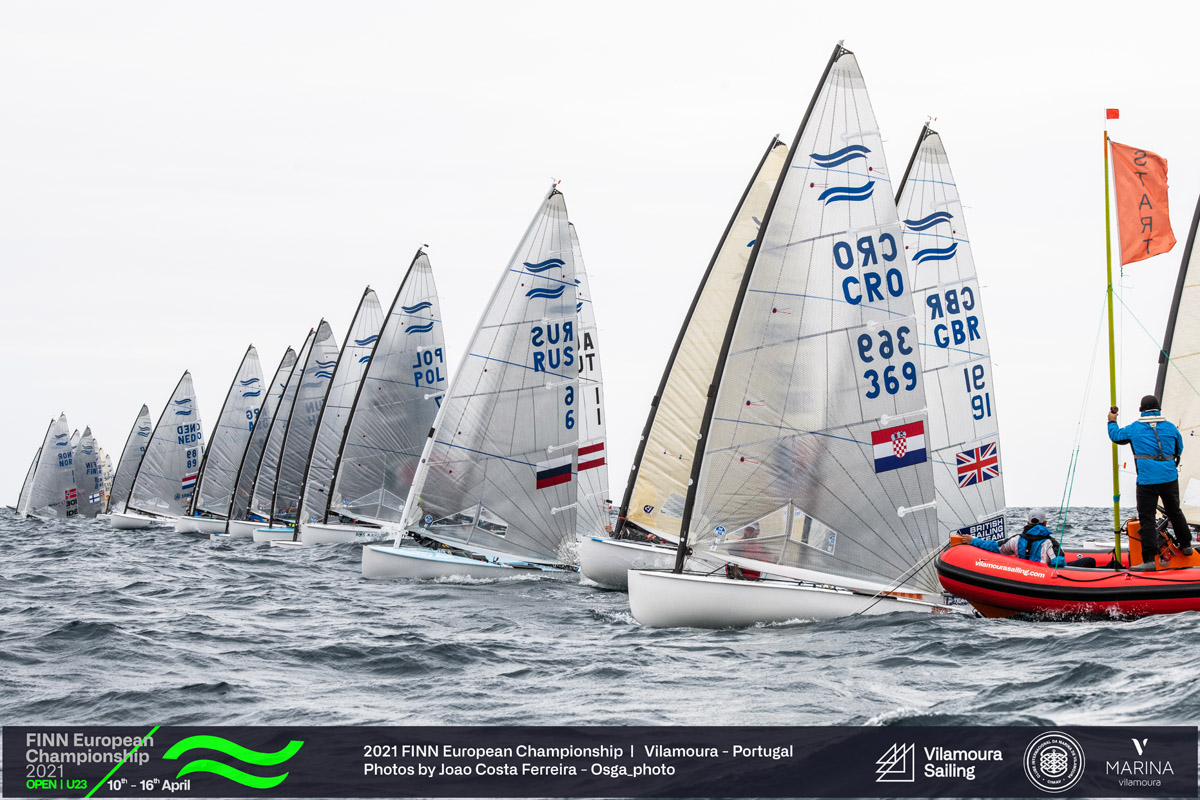 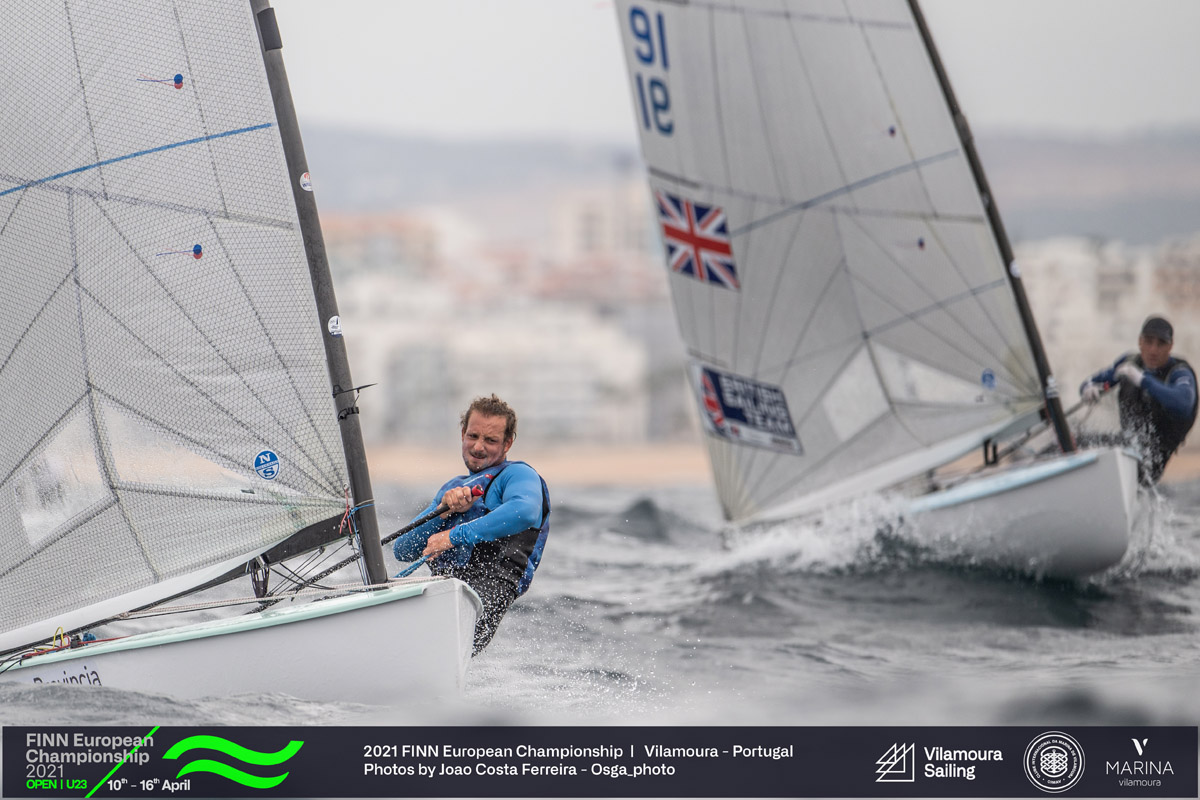