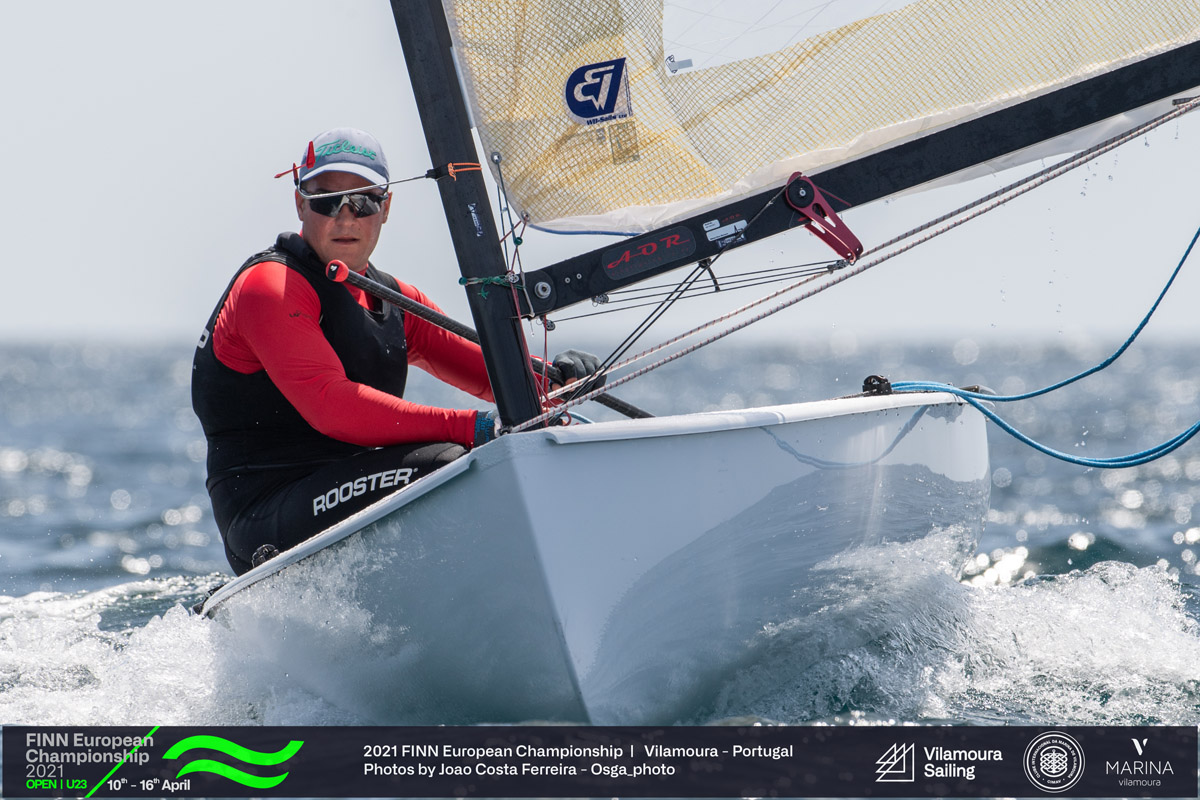 Joan Cardona, the defending U23 European Champion from Spain, showed some serious form on the second day of the 2021 Open and U23 Finn European Championship in Vilamoura, Portugal. Cardona is one of the world’s most exciting emerging sailing talents, and today won both races in a fleet packed with some of the best Olympic sailors in the world.

Cardona has already made his mark elsewhere in the sport. He won the 2020 eSailing World Championship and is a member of the Spanish SailGP team, but his Olympic career could be over before it even starts, having no chance to sail another boat due to his physique.

“I feel like the Finn class has so much more to offer me, but if it is not Olympic any more my Olympic dream will end at the age of 22.”

He dominated the racing on Tuesday, always in the mix and making the breaks count. 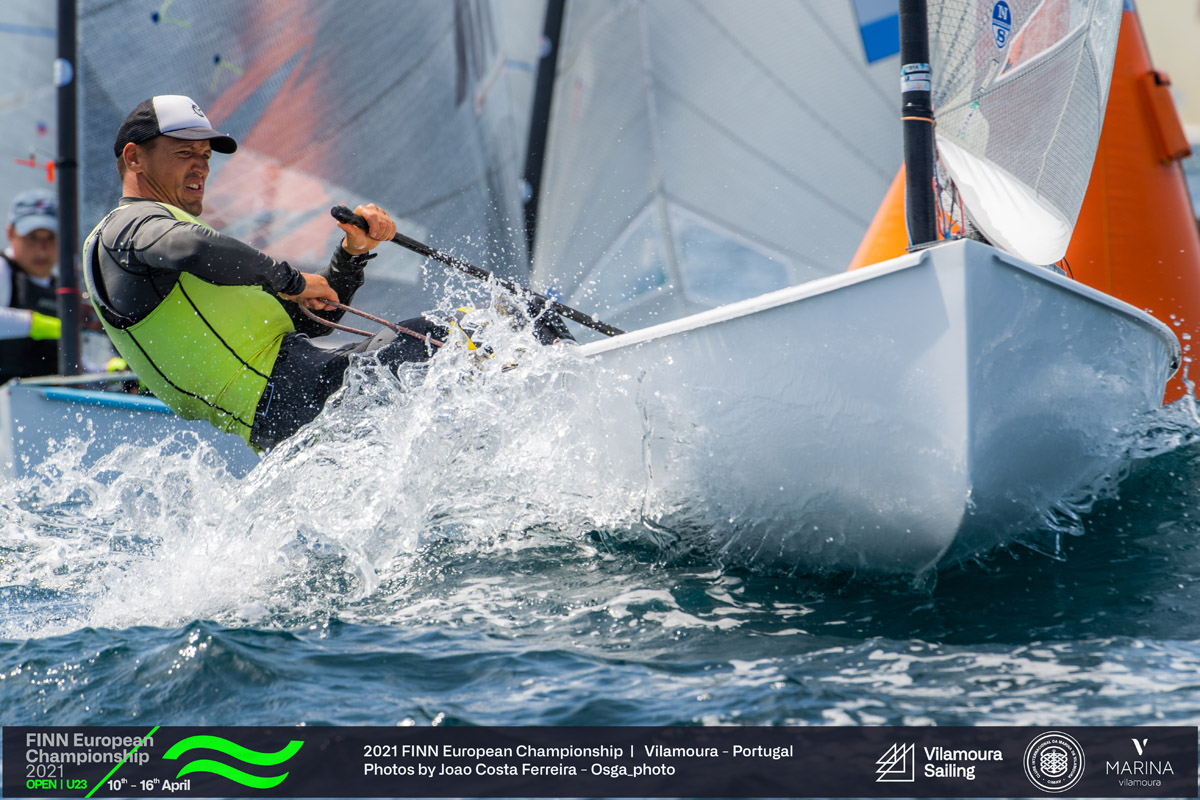 The left side of the course was popular in Race 3. After a clear start in around 9 knots, most of the fleet headed left but the leaders at the top were those who came back on a long port tack about half way up. France’s Jonathan Lobert was first round from Cardona and Vujasinovic.

In an increased wind, with free pumping, a good swell and nice waves the good sailors were able to get going downwind and stretch out a lead. Lobert and Cardona extended while Nils Theuninck, from Switzerland, pulled up to fourth at the gate. There were also big gains from Jorge Zarif, from Brazil, Max Salminen, Sweden, and Oskari Muhohen, from Finland. Regatta leader Berecz also moved through the fleet.

On the final upwind, the leaders played the left and most of the fleet followed, so not much changed. The wind dropped to 8-9 knots on the final downwind, with a huge spread across the course trying to find more breeze. The leaders separated by over 600 metres at times with Cardona passing Lobert on the right and Theuninck leading the left. It was a close finish but Cardona crossed just ahead, while Lobert finished third.

Race 4 got away first time in slightly less wind at about 8 knots and again the left was favoured. Those who got the better starts led to the left and crossed back ahead. At the top it was Vujasinovic, Taavi Valter Taveter from Estonia, Lobert, Brazil’s Jorge Zarif and Cardona.

There were still some waves left over from the morning, but no free pumping and those who gybed away down the middle made some gains downwind. The leading group of six arrived at the gate almost together with Vujasinovic still leading.

While the group went left again on the final upwind, a later right shift brought a few a boats through the fleet, with Antoine Devineau, from France, in particular gaining around 15 places. However the front group emerged unscathed, with Cardona now leading, and set off for the finish in just 6-7 knots of wind.

On the final run Cardona pulled out a nice lead from Vujasinovic, who crossed second while Nicholas Heiner, from The Netherlands, recovered to third. 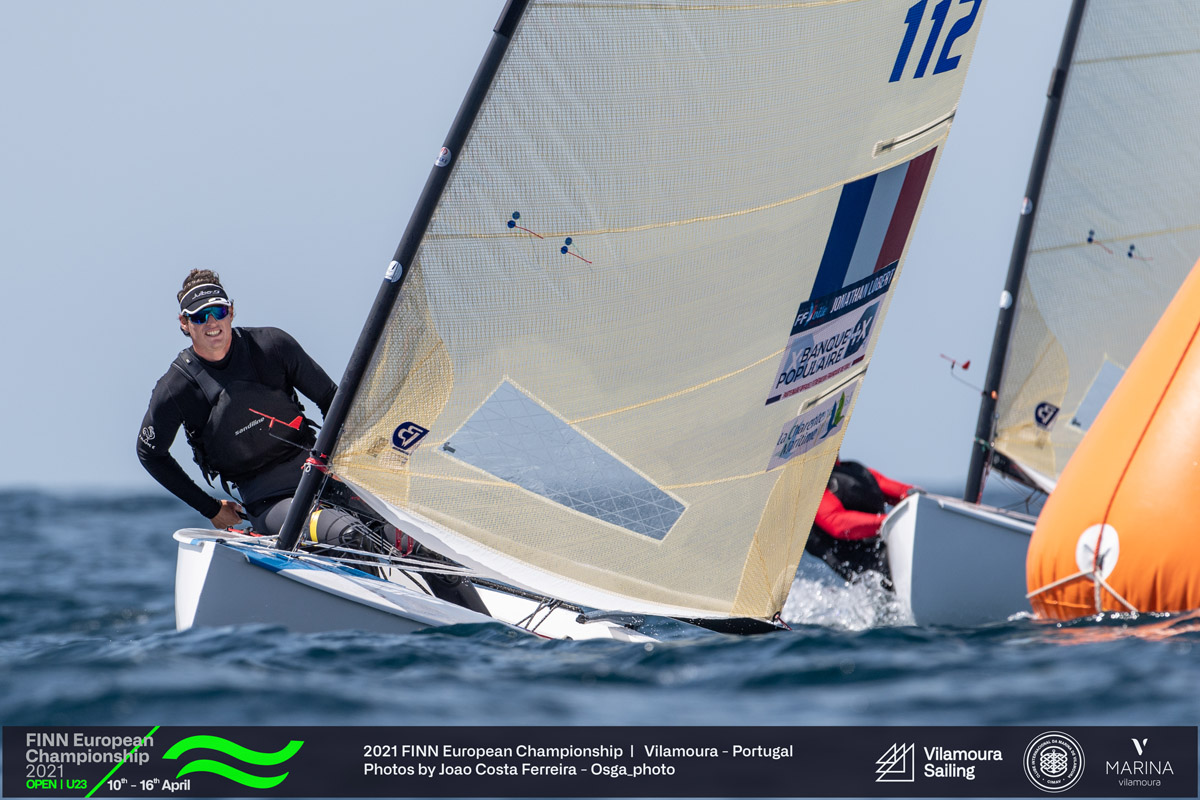 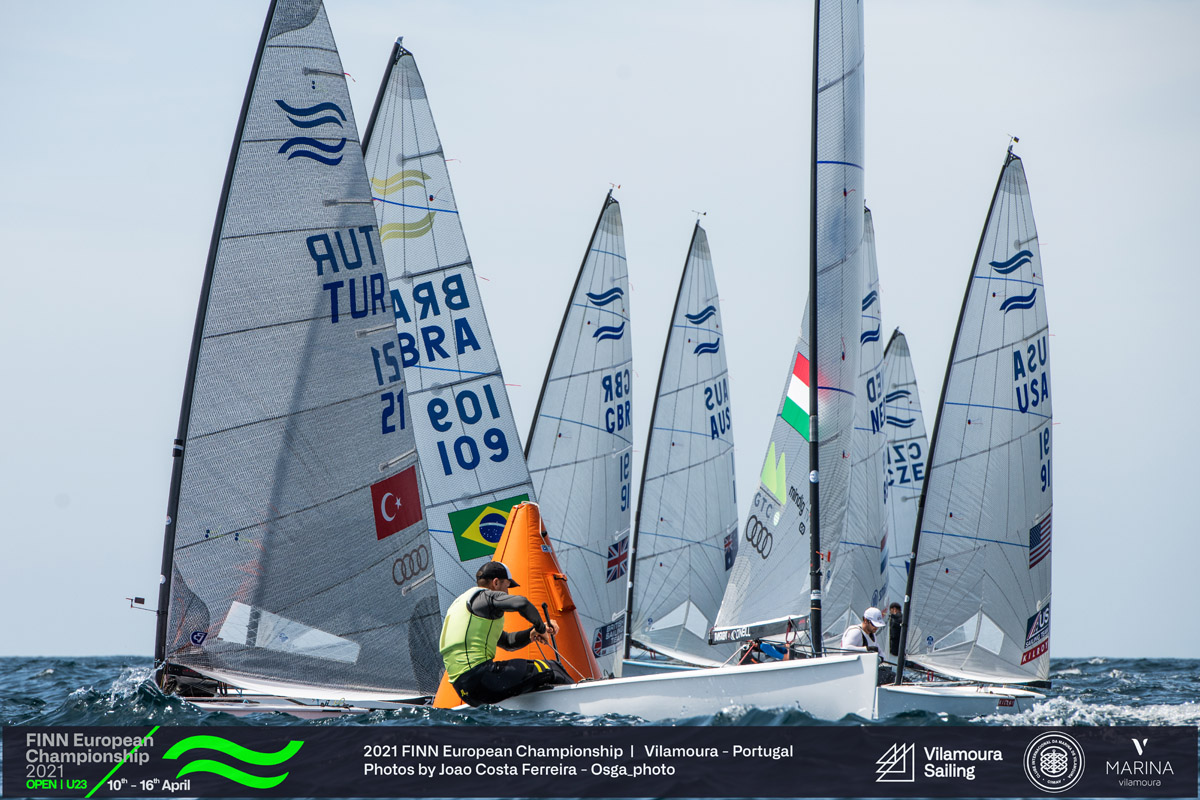 After a high scoring first day, Lobert picked up a third and a fourth, the second best score of the day behind Cardona.

Lobert said, “Pretty happy with my day. Yesterday was a terrible day for me. I was a bit rusty from racing and I sailed too conservatively. Today I decided to trust myself more and sail the shift as I saw them. I was leading almost all the first race but on the last downwind I lost Joan and Nils coming back with the pressure. On the second race I kept the same mood and I crossed the finish in fourth. It a very good day but most of all I am getting my confidence back.”

Winning two races at a major Finn championship doesn’t happen very often, but today for Cardona it all came together.

“Today was a really good day for me. I really like those conditions of about 8-12 knots and choppy waves. I had a really good speed upwind and downwind and took really good decisions in key moments. I am really enjoying being on the water with such a great fleet and such tight racing.”

Following the news this week that World Sailing consider there is a distinct possibility the offshore keelboat option will be rejected by the IOC for 2024, the prospect exists again that the Finn could be included for Paris 2024 after all.

Cardona explained how this decision would affect him.

“For me it would be a life changer if the Finn class makes it to the next Olympics. I am still U23 and did not manage to qualify to the Olympics yet.”

He is still one of the youngest sailors here but is showing great form in one of the toughest fleets in the world.

“This fleet is so talented that taking all of us out from the Olympics, it’s a really big loss for the sport of sailing. I really hope the Finn class can stay Olympic for much more time.”

Racing in Vilamoura is scheduled to continue at 12.00 on Wednesday. 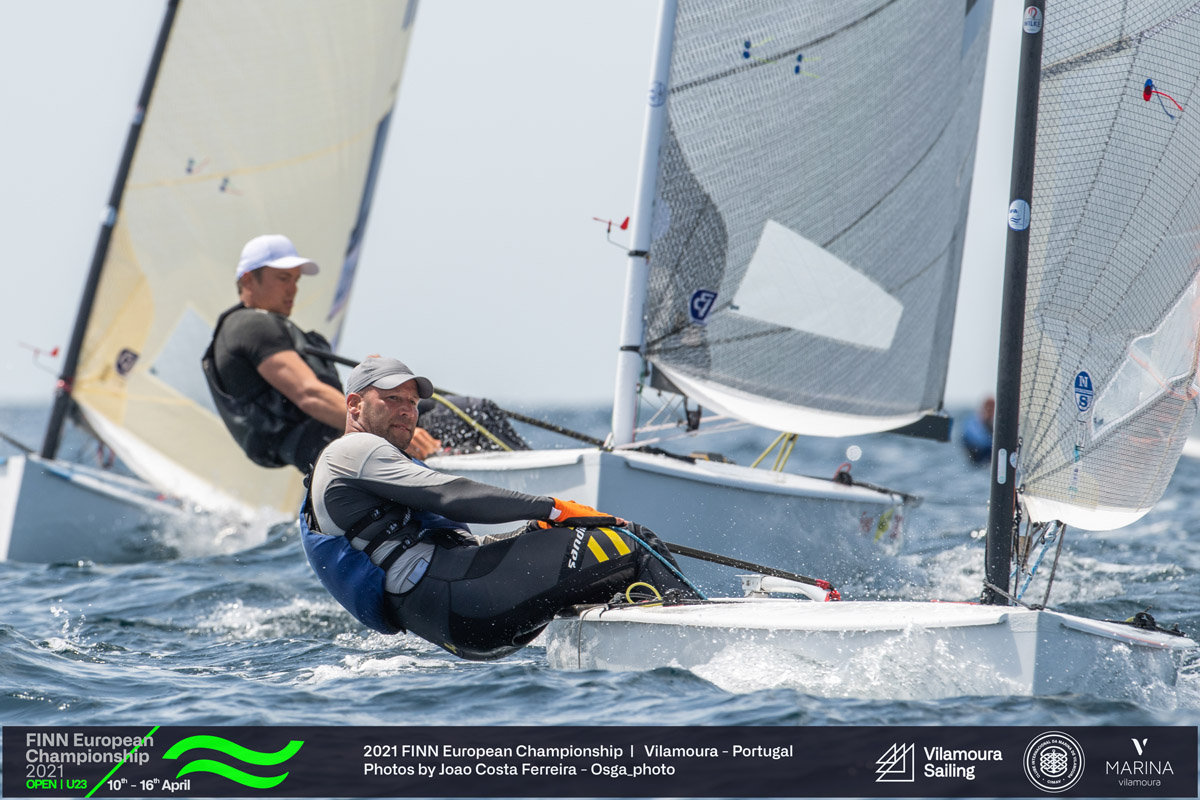 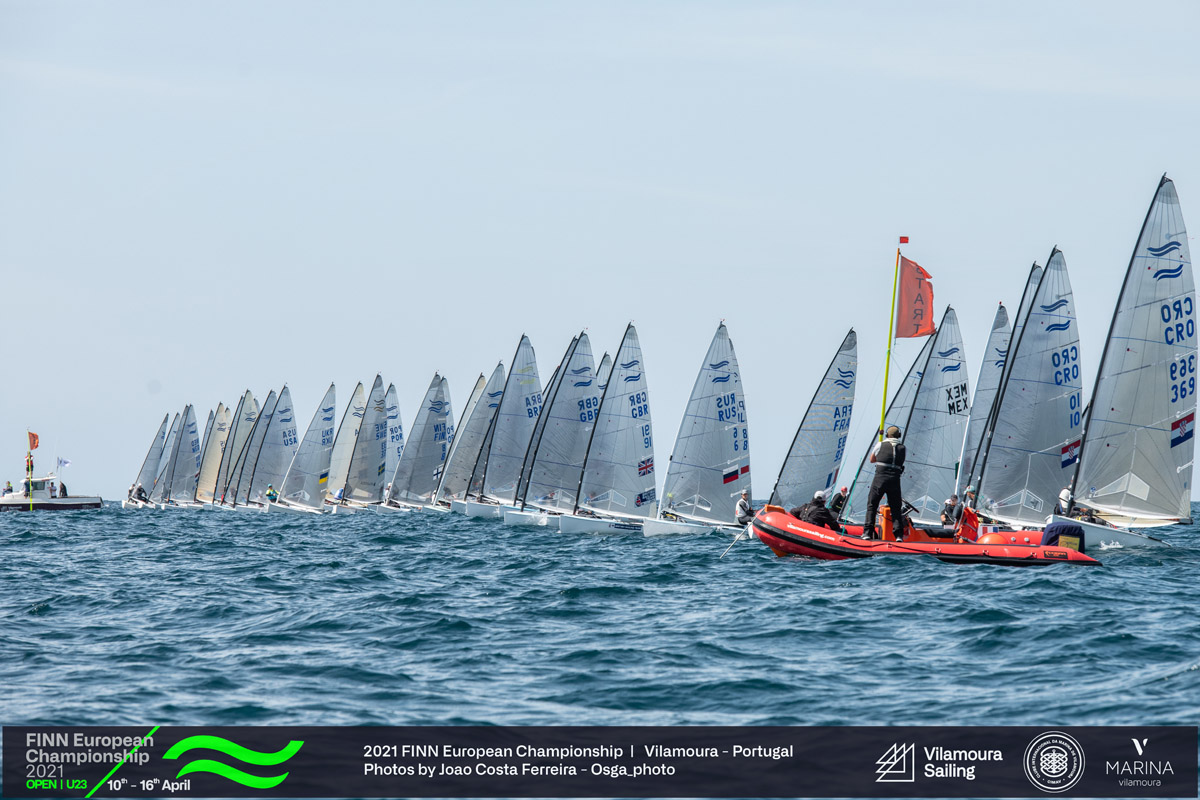 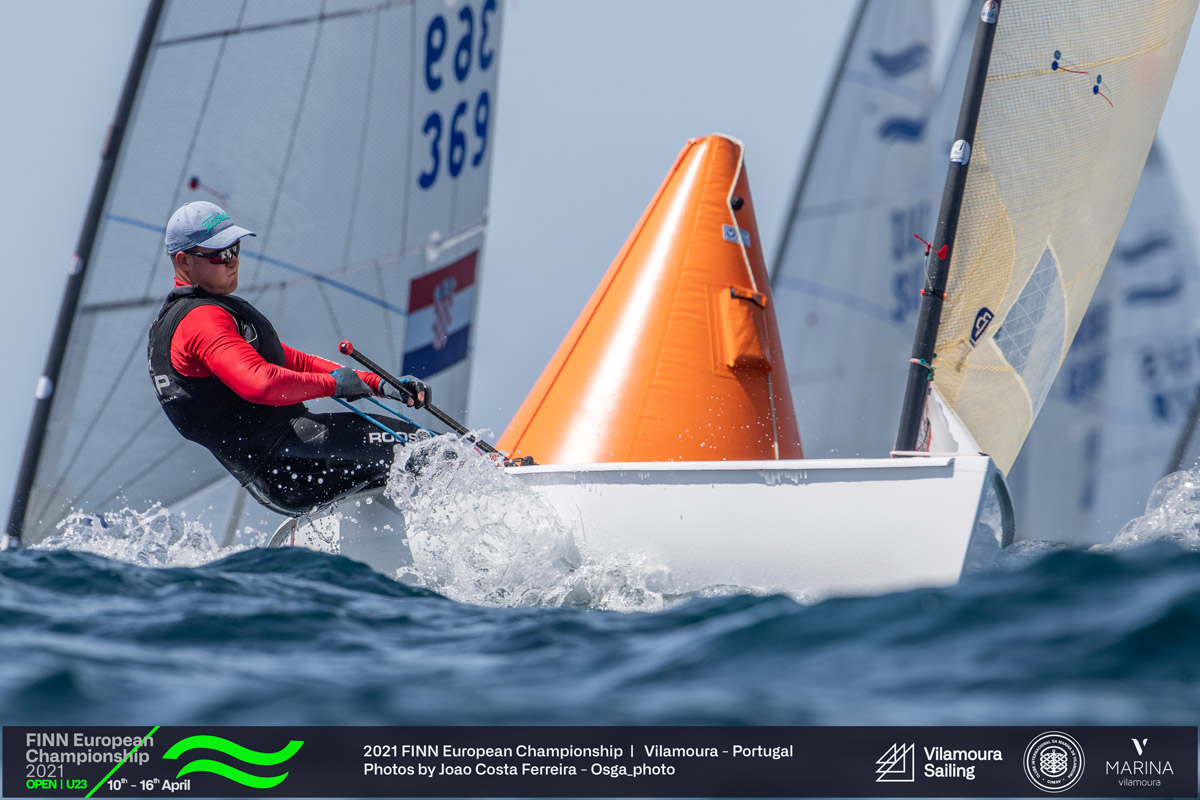