FINNFARE has been part of Finn class culture for 60 years. First published in 1961, it has consistently brought Finn sailors the news and views from around the world.

FINNFARE is also the legacy of the class. In 1961, the arrival of FINNFARE was often the first news of major races, and the only place that Finn addicts could read about their heroes and see what they looked like.

FINNFARE has also documented the history of the class at the Olympic Games and the 14 past covers shown in this issue illustrate the evolution of that coverage.

This edition is the 167th issue since it was started in the USA by Fred Miller in 1961. Over those six decades 11 editors have published just shy of 4,000 pages of fun filled Finn pages. While many have called for FINNFARE to become 100 per cent digital, in recent surveys the majority have steadfastly stuck to the desire to receive it through their letter box three times a year, something tangible, to be read at their unadulterated leisure. 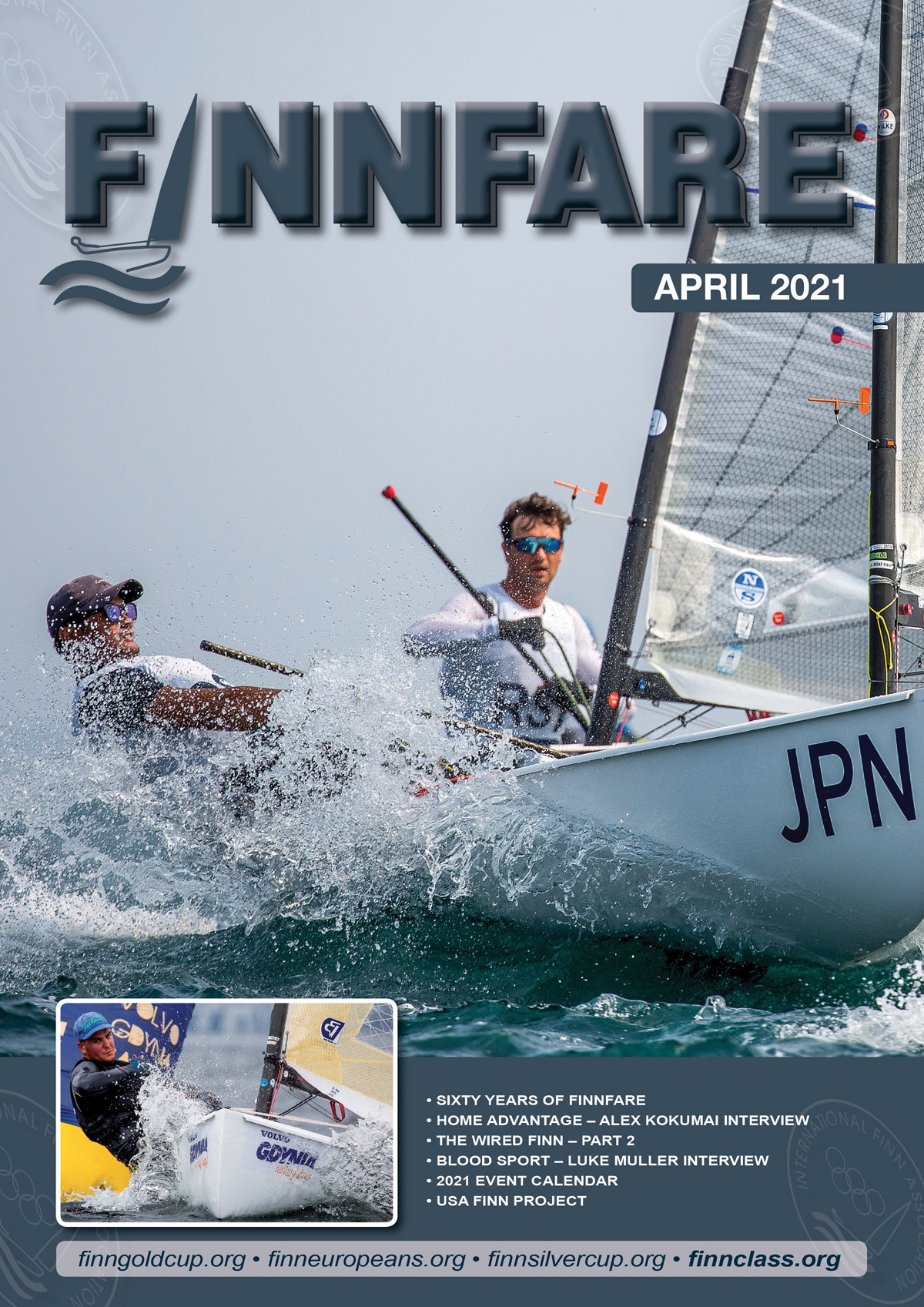 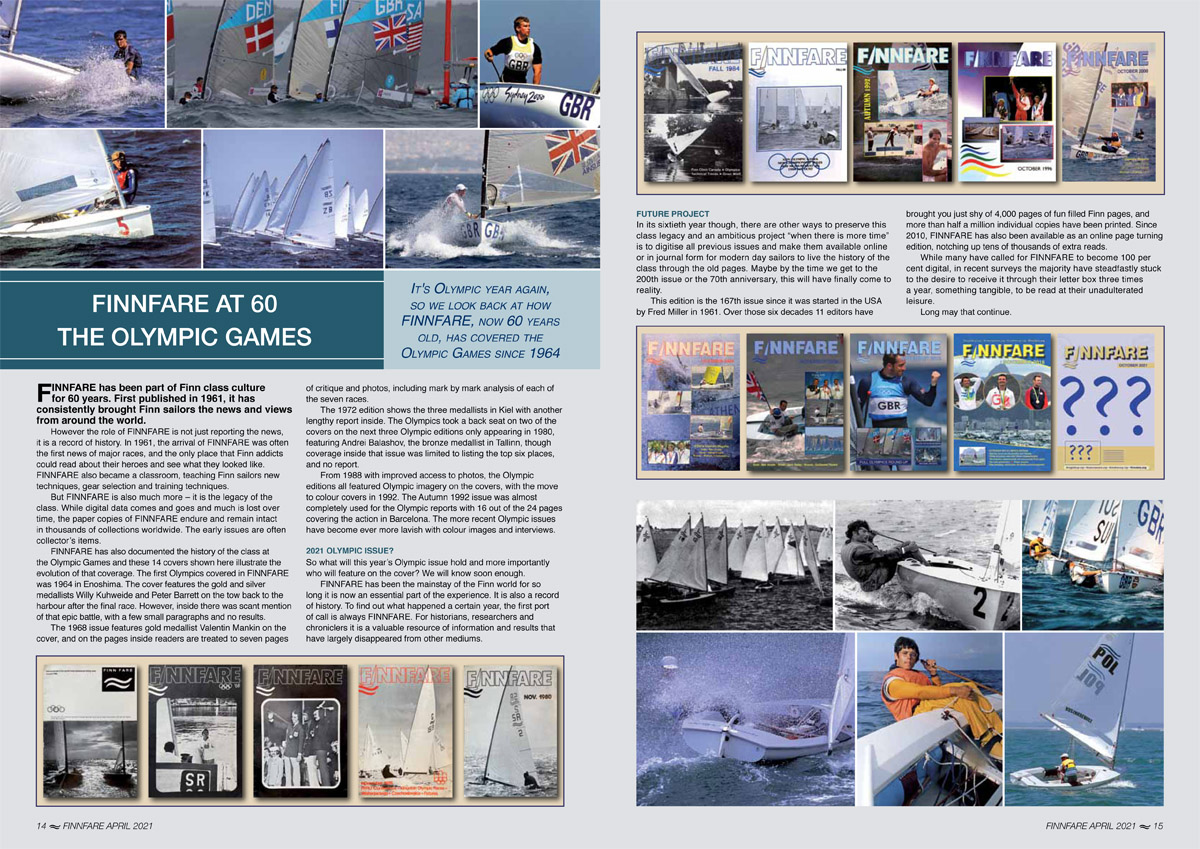 In this issue we talk to two of those heading to Tokyo this summer Alex Kokumai, from Japan, and Luke Muller, from USA, both featured on the front cover.

In the meantime, Alex has had the Olympic waters almost to himself while everyone else is unable to travel.

“Last year when I was sailing during when the Olympics was supposed to be, I thought about what it would have been like and what kind of drama was going to happen. At first the postponement was shocking, but at the same time I thought it was a good decision. Japan is now working hard to make the Olympics possible.”

He says the Olympics in Japan has been a catalyst for growth in the class there.

“Actually the Finn class was big in Japan back in the day, even before I was born. It was even one of the classes in the National Sports Festival of Japan where we compete against 47 prefectures every year in Japan. A lot of sailors over 40 in Japan have sailed the Finn before. I think there is still chance the Finn will make a come back. And to start that, us Japanese Finn sailors have to lead the way. I hope it will grow.”

He also strongly believes the Finn should remain Olympic.

“I think Finn should stay in the Olympics. I believe sailing and Olympics is something that connects people and Finn class is one of the sailing classes that all ages can sail and race together on the same course. I agree that sailing is changing and it needs too, but I like to sail in the class that I can sail when I get older and race against young future sailors.” 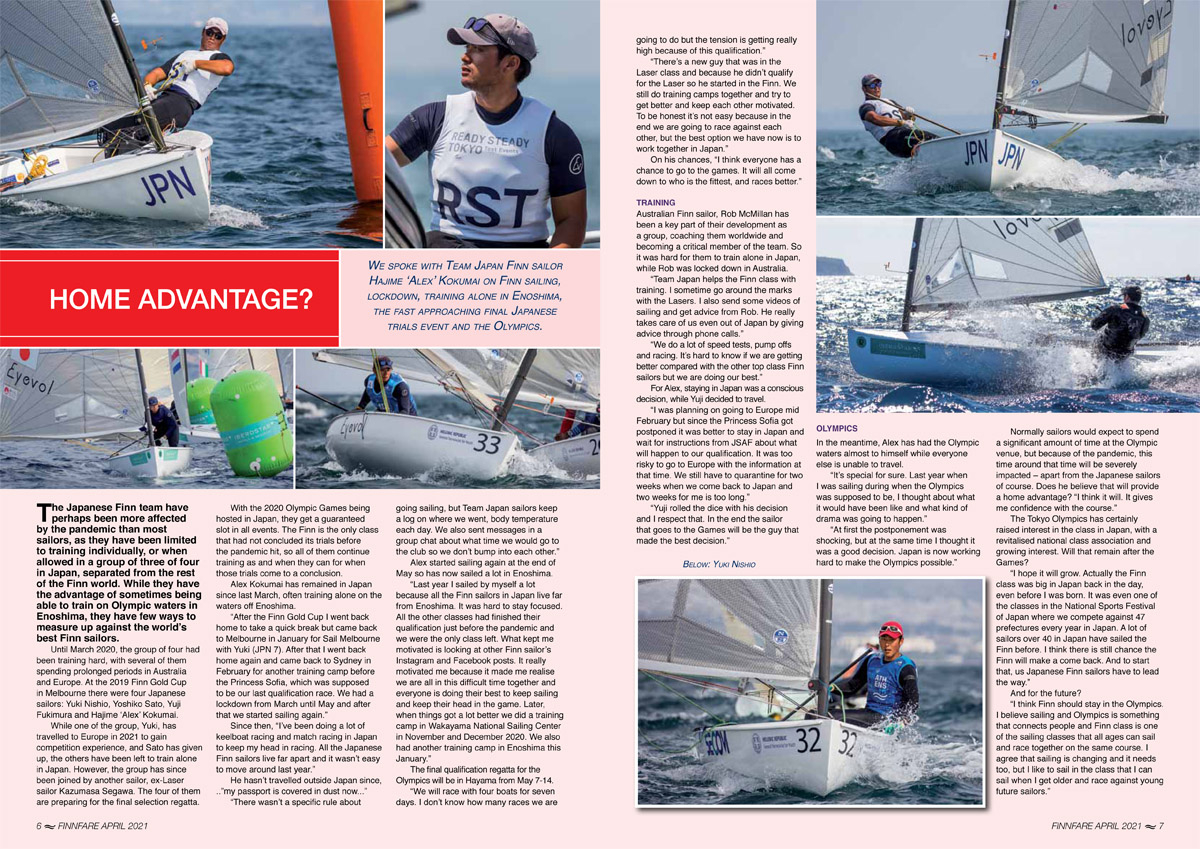 Luke Muller has already been selected for Tokyo and used the time caused by the postponement as wisely as possible.

“I kept learning more and more and getting better and better until I won the selection series and was selected for Tokyo. With everything changing due to the pandemic I had to make some changes and we adjusted our team with a great training partner in Eric Anderson and spent many hours trying to get the most out of the boat.

“I think this last year has been a huge opportunity to step away from the regatta schedule and purely focus on how to make a Finn go fast. That process has been gratifying and I am excited to apply those gains to the race course.

“The Finn is a demanding boat. Physically the Finn requires great effort to make it move as fast as possible, and the racing is top notch with many world class sailors in the fleet. Sailing in a team is fun but in single handed sailing you have to do everything and you are ultimately responsible for what happens during a race and I really like that.

“The Finn and the Finn class have made me a better sailor.”

There is also encouraging news from North America as the class there tries to get a building project underway to cater for the large influx of sailors over the past years as it grows in popularity. USA Class President Peter Frissell reports.

“Due to the efforts of some North American Finn sailors, the class is experiencing a renewed interest. As a result, it is lending boats to people so they can give the Finn a try.” But, “The costs of importing a new boat can increase 35-40 per cent due to extra charges such as tariffs and shipping.

“The United States Finn Foundation has just put in motion a fundraising campaign to raise funds to cover the initial start-up costs and production of the first boat, thus reducing the price of future boats. There is still an immense amount of work to be done before we start construction on first US Finn but progress is being made.” 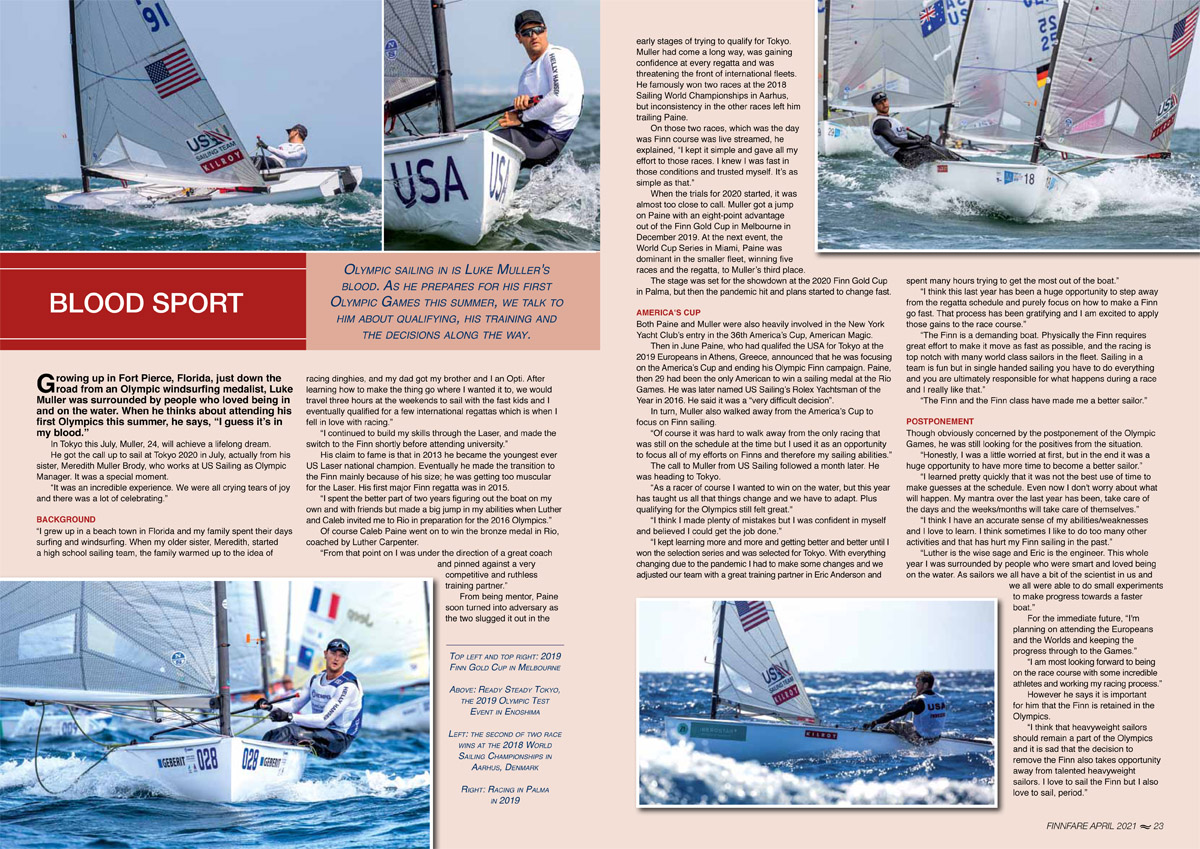 Also in this issue there is the second part to a story by WB Sails, Mikko Brummer, looking at the setup for analysing Finn mast behaviour while sailing.

He writes: “The mast dynamics come into play whenever a gust hits, but especially when sailing in waves and a chop. The dynamic behaviour of the Finn mast can be measured in a test bench similar to that used for the static tests. The mast is loaded from its tip, the load is released, and the time it takes for the oscillations of the mast to die out is representative of its dynamic properties.

“The real-world sailing conditions, however, are quite different. The sail is supporting the mast and its aerodynamic dampening is so strong that the bench test numbers may be of little value. From practice, we know that the dynamics of the mast are important since two masts with similar static bending numbers can feel quite different when sailing in a severe chop. Through the fibre optics test and simulation, we hope to understand better what lies behind this.”

The April 2021 edition of FINNFARE can be downloaded from the Finn class website here or read online here.