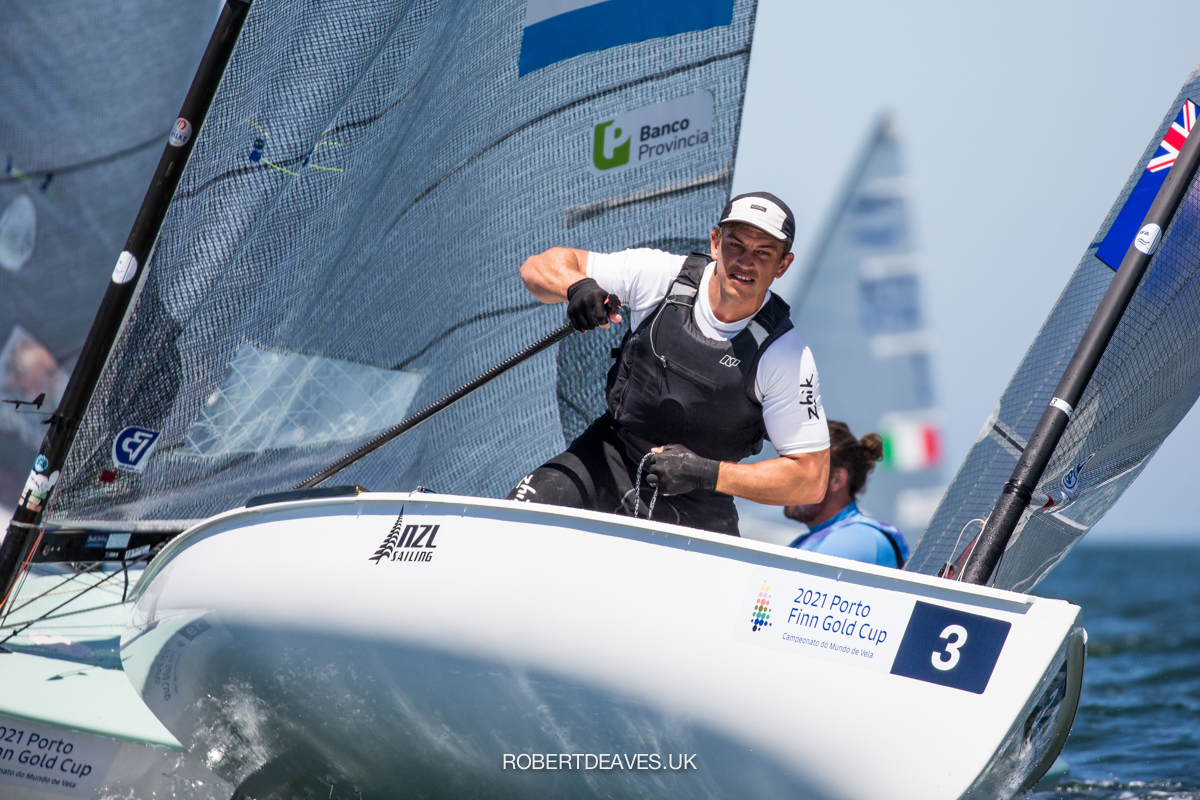 New Zealand’s Andy Maloney has grabbed the early lead at the Finn Gold Cup in Porto, Portugal, after three races on Saturday, the first day of racing. Joan Cardona, from Spain, won the second race and the European Champion from Hungary, Zsombor Berecz, ran away with the final race to sit in second and third overnight. USA’s Luke Muller won the first race.

Three races were scheduled on the opening day in response to the forecast for unsafe conditions on Sunday and Monday because of heavy rainfall and a huge ocean swell caused by a passing storm. However the opening day brought near perfect conditions with wall to wall sunshine and wind ranging from 7-8 knots in the first race up to 12-14 in the next two. Few sailors found consistency across all three races setting up a fascinating week ahead. 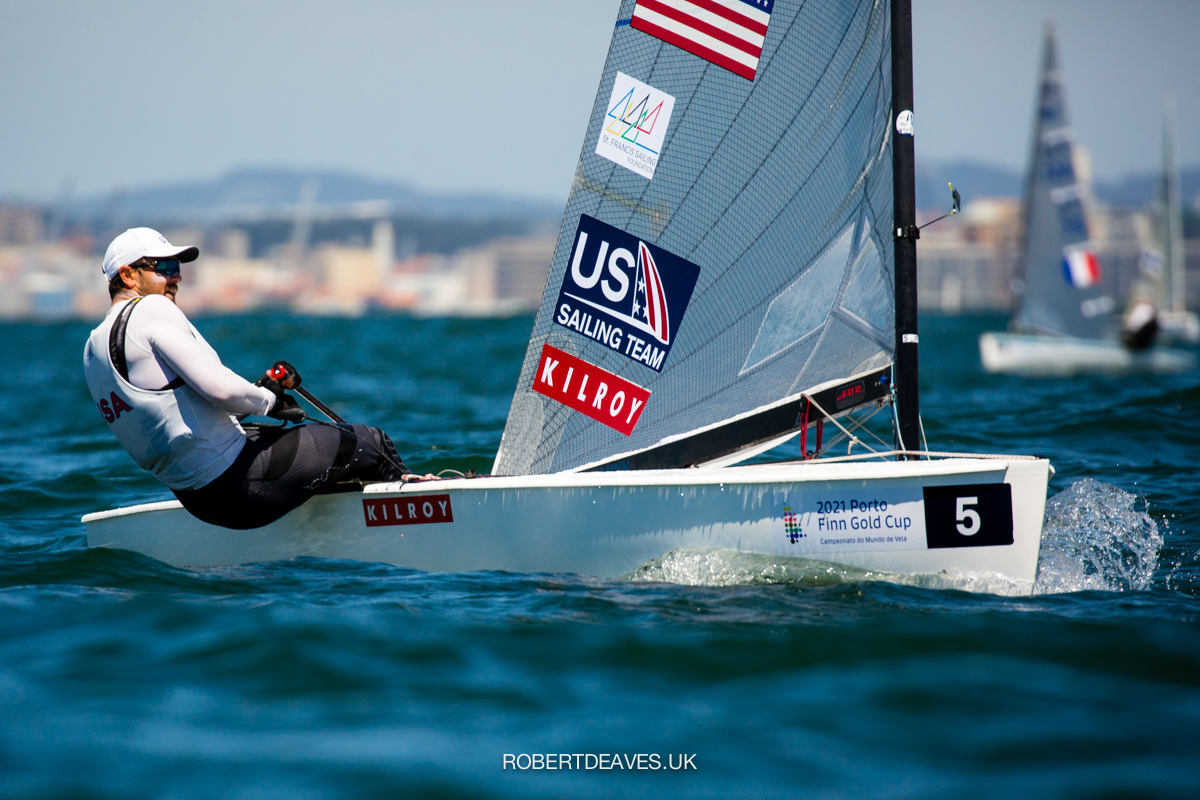 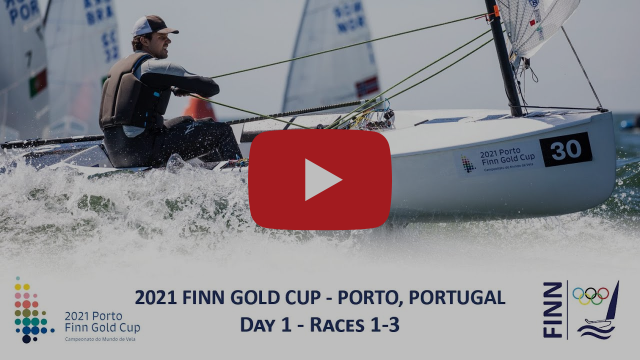 Ioannis Mikakis from Greece was the early leader in Race 1, chased by Nils Theuninck, from Switzerland and Muller. Muller had the better second beat to lead down to the finish to take the race win, while Maloney climbed to third. The biggest comeback came from defending champion Josh Junior, coming from around 40th at the top mark to cross in tenth.

The breeze strengthened for the second race with Oscar flag flying for free pumping. Maloney led at the top, but Cardona rounded second and was soon in the lead to take the win from Maloney and team mate Alejandro Muscat.

After many restarts and false starts the final race started after 17.00, but the conditions remained perfect. This time Argentina’s Facundo Olezza led at the top from Berecz, but the 2018 world champion moved ahead downwind and was never headed, extending to a comfortable lead to take the race win from Cardona and Olezza.

Muller summed up his day

“The first race was about working in your own space and going as fast as you could. Thankfully I had a bad start but tacked out quick and was kind in my own space and did just that and stayed on the lifts and went fast in a straight line. Simple as that.

“For sure I think the first race was a bit different from the next two where there was definitely better pressure on the top left side. I was on the port layline in the last race and went from something like 14 to sixth with Joan going as fast as we could. So the conditions were a little weird , but super fun and a log day. I’m sure everyone wants to get home, and get ready for tomorrow.”

It was his first race win since the Finn Gold Cup in Aarhus in 2018. “That was kind of a crazy day. Hopefully this is a bit more of an example or how I have improved rather than a just a brilliant day. We’ve done a lot of work, sailed a lot of days, and I am confident in my team and myself.” 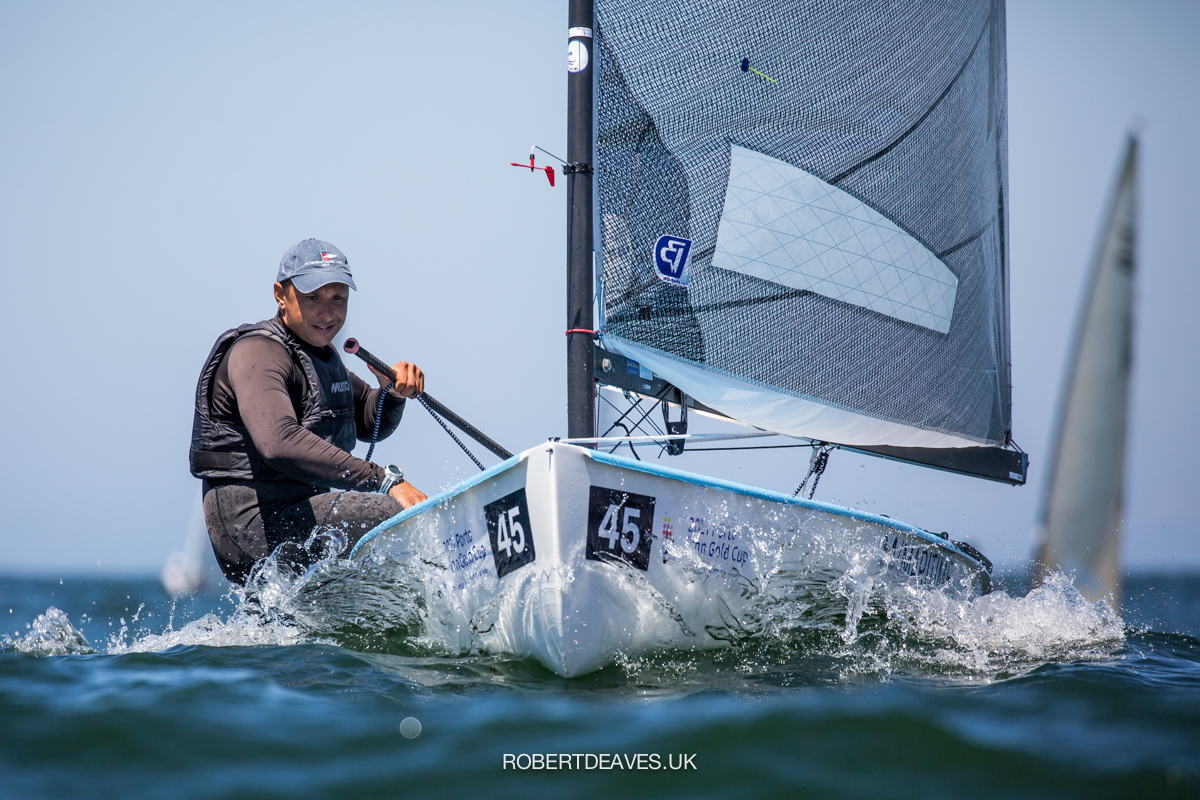 Cardona is rapidly becoming a regular at the front of the fleet.

“The first race I didn’t start well but my first upwind was quite OK and I was top 10. I didn’t have a good downwind but came back to finish 11, so it was an OK result. Today was about not making any discards.

The other races were super good for me I had really good peed, clear on my tactics, and they worked well, so I happy about today.”

He commented on the level of competition within the fleet.

“I think always in the Finn class the competition is super high and at the end the one who wins the championship has a lot of points compared to other classes so it’s all about being consistent in the front and not to have too many discards.

„I am looking forward to tomorrow. It should be fun. But I am not thinking about racing now. I am quite exhausted.”

Now comes the tricky bit. Overnight storms, combined with a 2 to 3 metre ocean swell mean that racing on Sunday and perhaps Monday may not be safe. Racing has been brought forward to 10.30 on Sunday, with an earlier call possible if conditions are not deemed safe. The hope is that there is a window for at least one race. 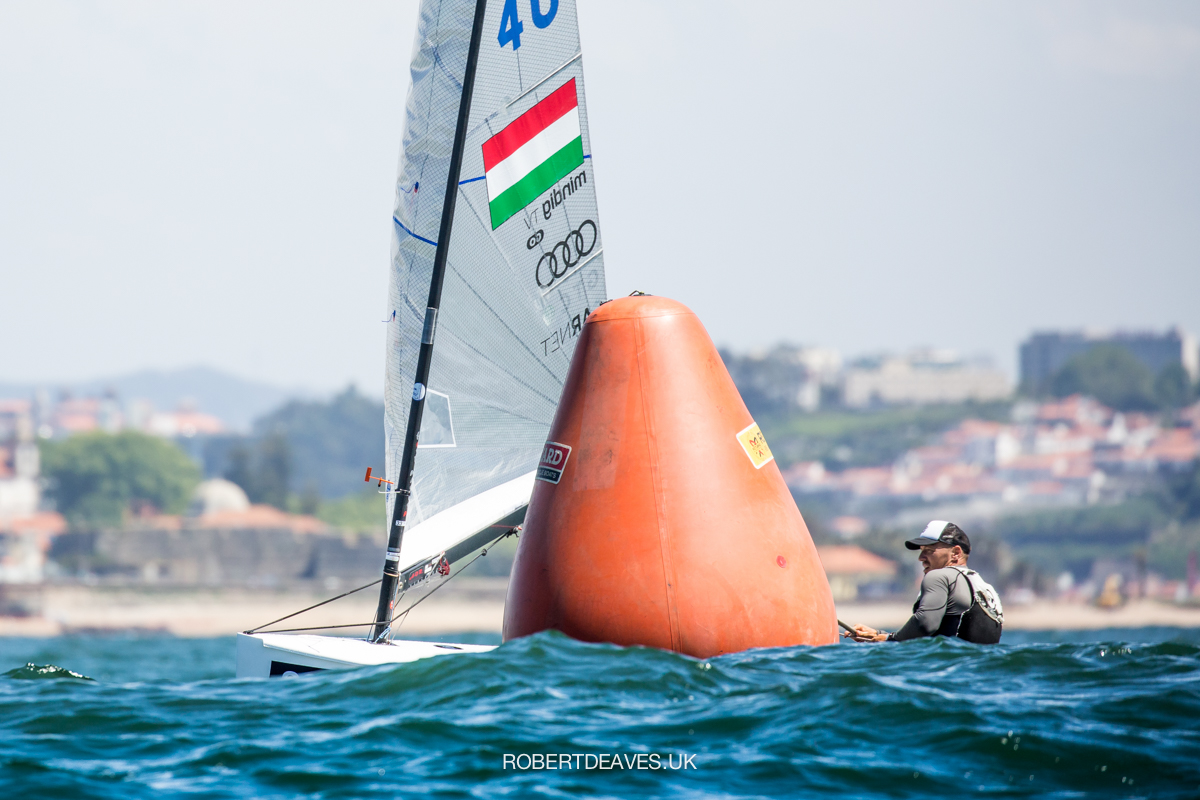 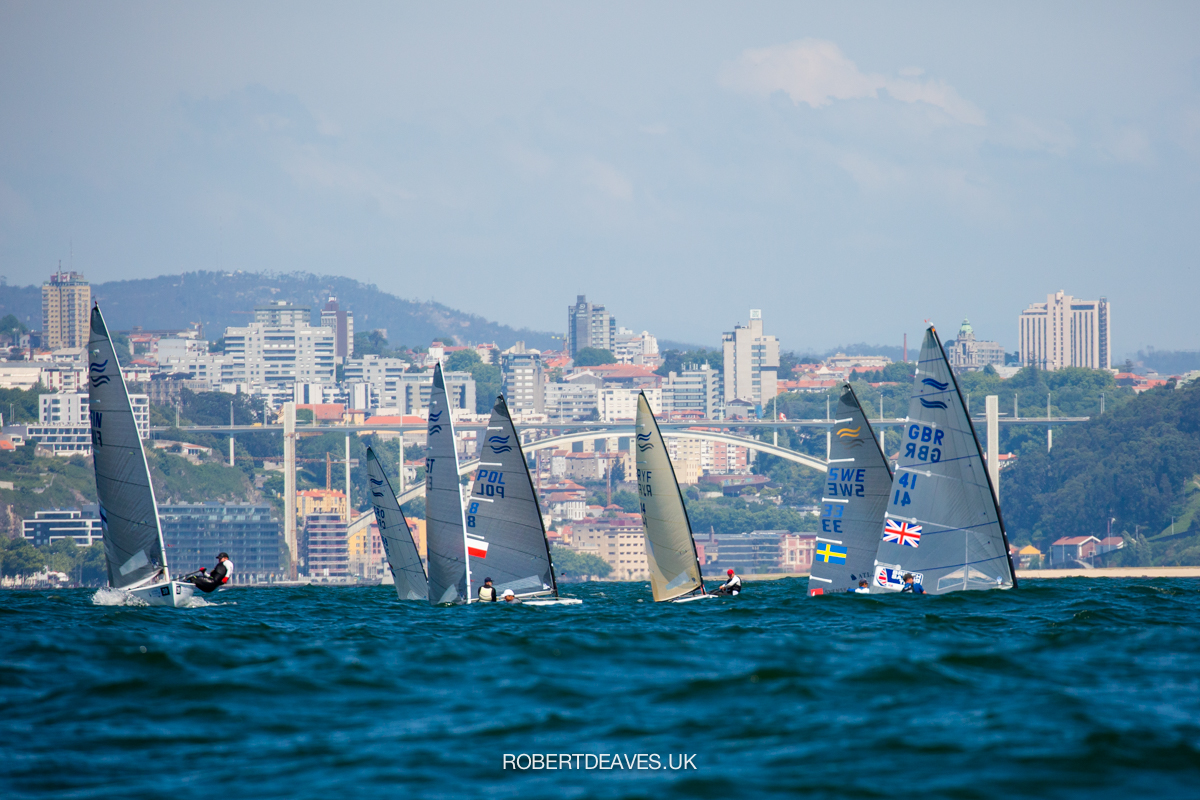 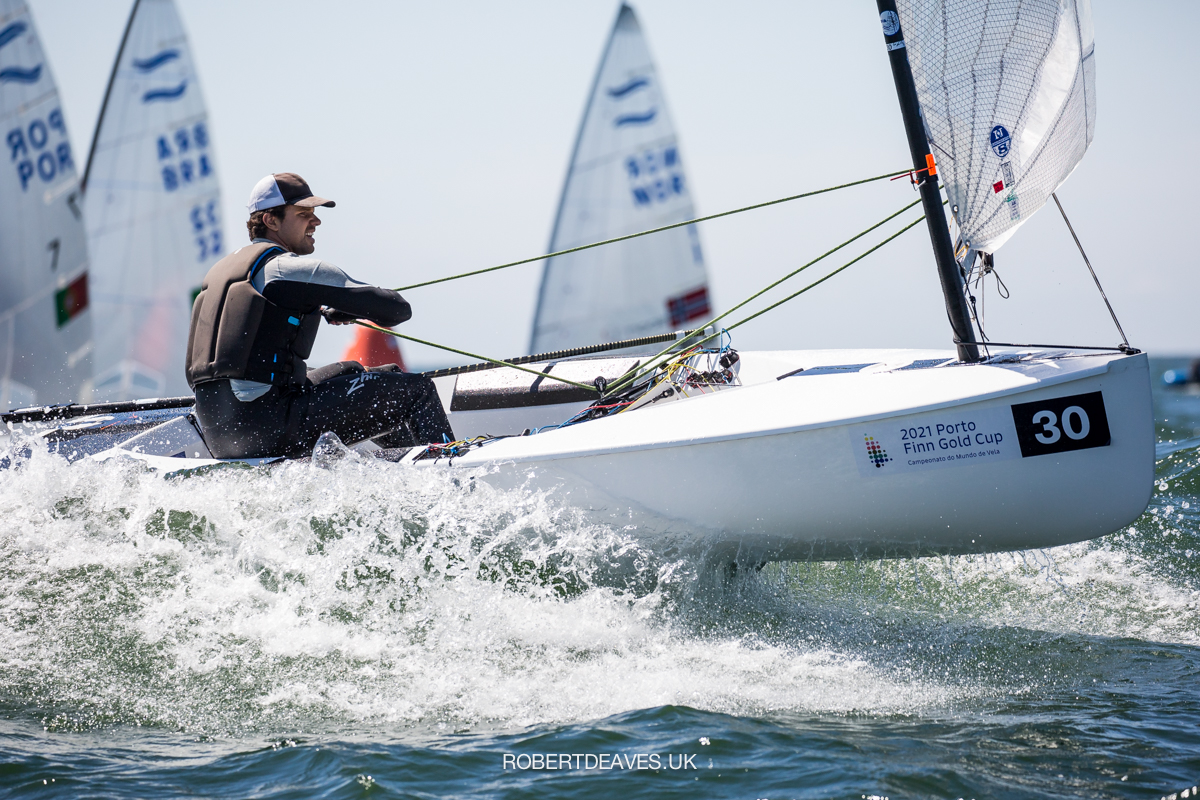 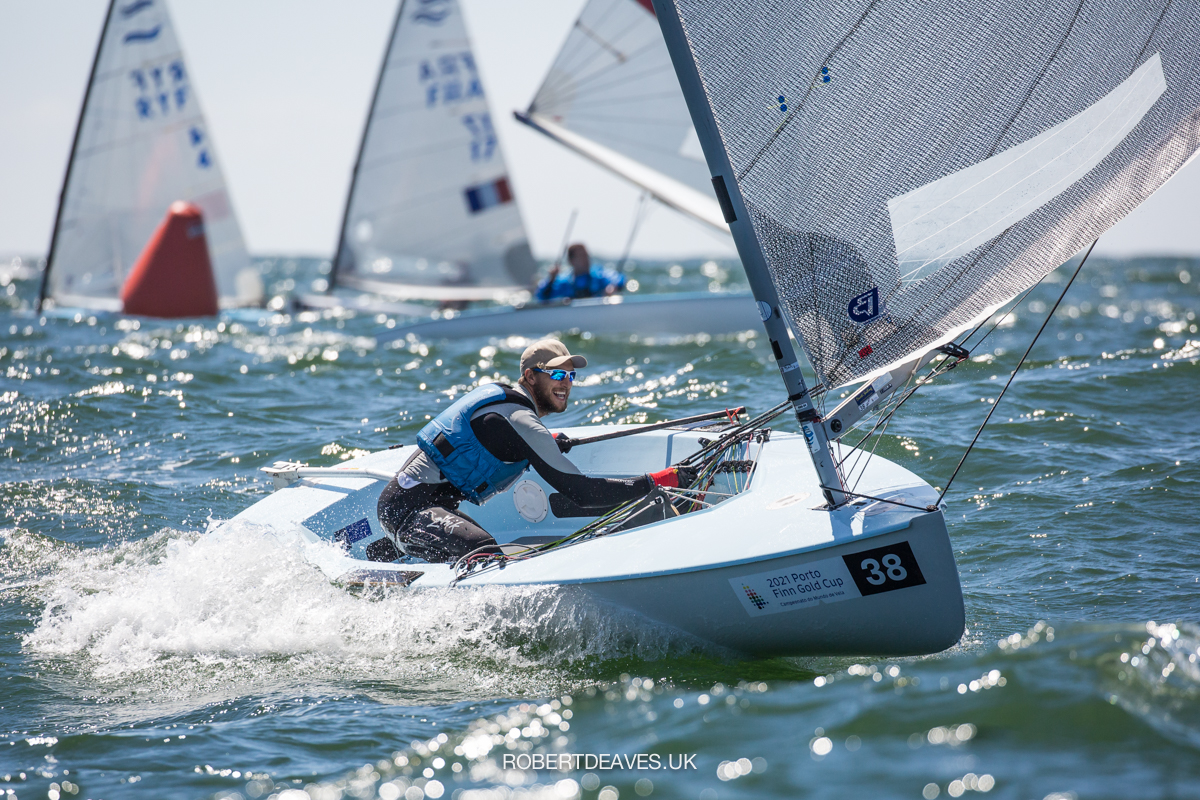 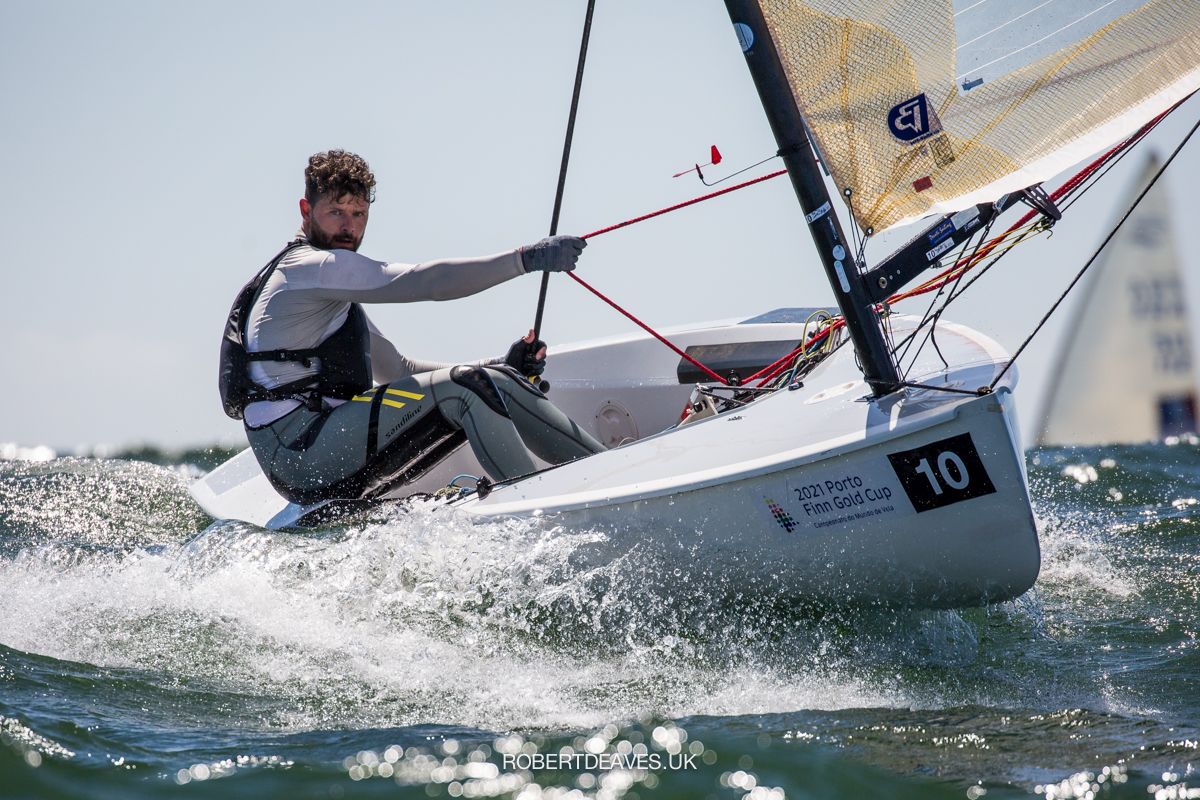