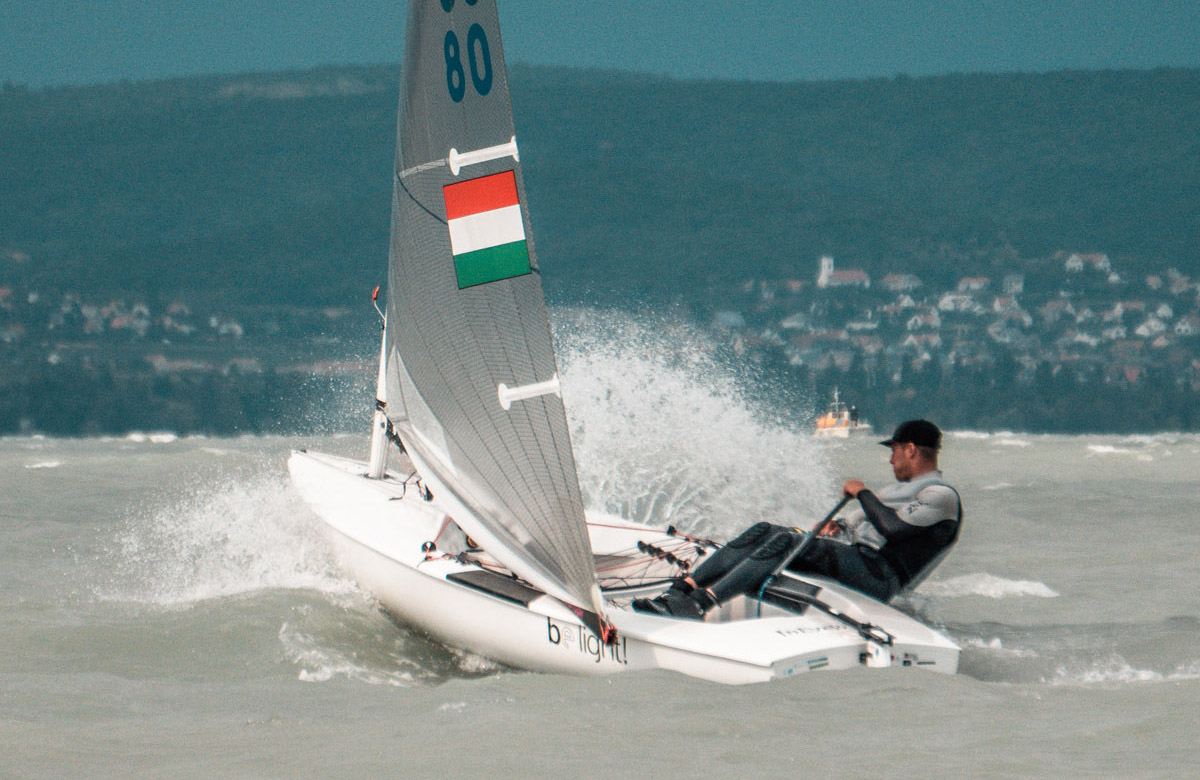 Twenty ambitious young Finn sailors, from six nations, are taking part in the 2021 U23 Finn World Championship for the Jorg Bruder Finn Silver Cup, which opened on Sunday at Tihanyi Hajós Egylet (THE) on Lake Balaton, Hungary.

Domonkos Németh, from Hungary, leads overall after taking three bullets on a day that was all about speed and hiking. In fact the top three are all Hungarian sailors with Levente Rácz in second and Bence Rácz third.

The day was sailed in two halves with two nice races in a steady 10-12 knots, dropping down to 6-7 at times, before a thunderstorm caused the third race to be cancelled. After several hours waiting on shore a diminished fleet set out again in 15-20 knots and big waves. 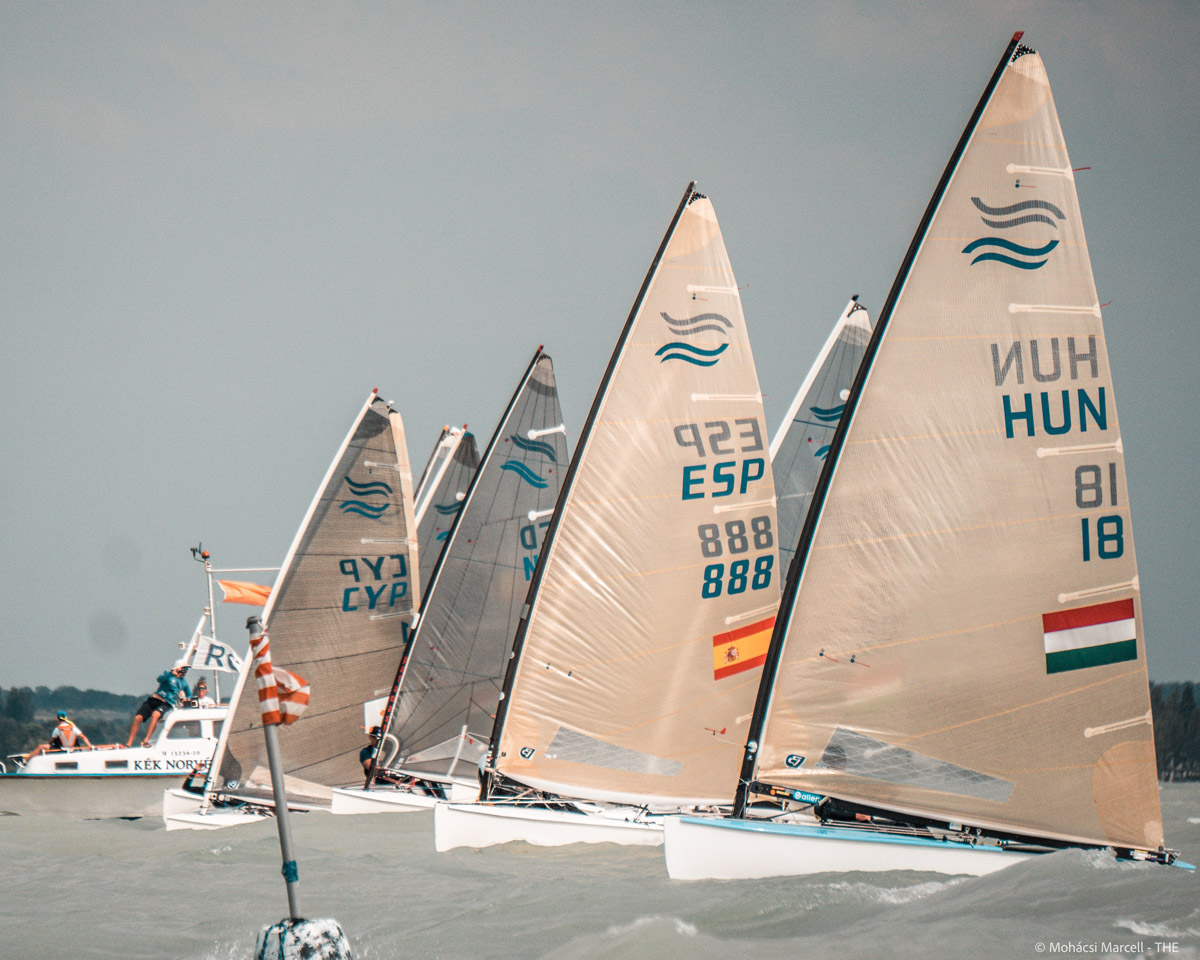 Race 1 got underway in an easterly 10-12 knots after one general recall. Groups went left and right while Németh played the middle and led at the top through better speed and good hiking. Mikhail Yatsun from Russia, who was UFD, Sjoerd Hofland, from The Netherlands, and Levente Rácz were not far behind.

Németh was fast downwind to build a big lead by the bottom, with Yatsun moving up to second. The wind started moving left on the second beat and they held on to the front, but with the Russian disqualified, second place went to Rácz with Panagiotis Iordanou, from Cyprus, picking up third. 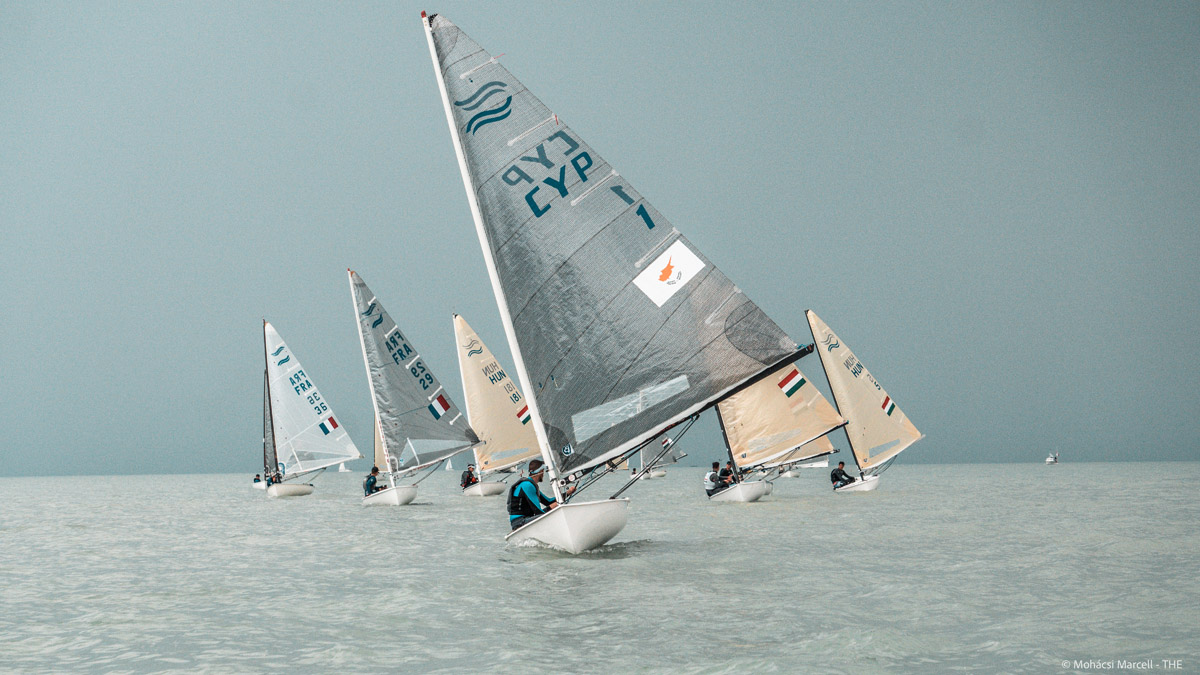 The wind remained the same for Race 2 and again Németh led at the top, from Levente Rácz, Bence Rácz and Iordanou.

With free pumping downwind, Németh stretched out a 30-metre lead while Yatsun found more wind on the left, and with good technique, moved up to fourth. Not much changed on the final upwind, with Németh taking a second win, this time from Bence Rácz and Ábel Szûcs

The third race was abandoned only a few minutes from gate with Levente Rácz leading. The wind died with a big storm, thunder and heavy rain. The fleet went ashore to wait it out.

When they returned to the water the wind was more than 20 knots, with big waves. Only 11 boats started, though the wind moderated to 15-18 knots at times.

Németh dominated the race, and it was clear the top five sailors were more used to these conditions than the rest. Behind Németh, Yatsun, Iordanou, Andres Ivan Lloret Pérez, from Spain, and Levente Rácz were close together down the first run. The gaps increased on the second round and there was some position changing as they jostled down the final leg, but the final order stayed the same. Németh showed his experience with a massive win from Yatsun and Iordanou.

Special mention goes to Attila Svastits, from Hungary, one of the smallest sailors in the fleet for getting round the final race with no capsizes to cash in a 10th place in the reduced fleet. He may have been slow, but he was steady, and sailed well.

The Finn U23 World Championship in Tihany continues until Thursday 15 July. 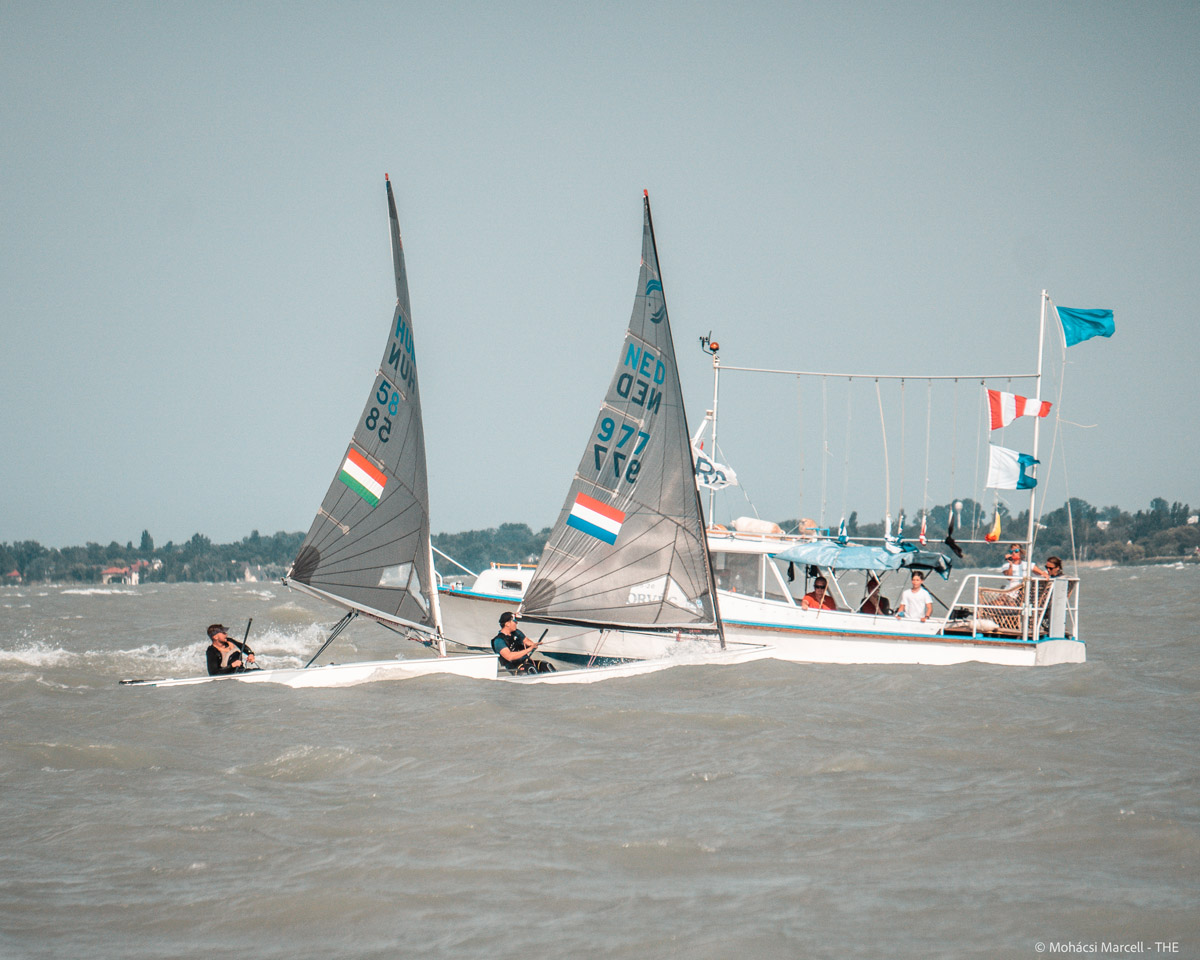 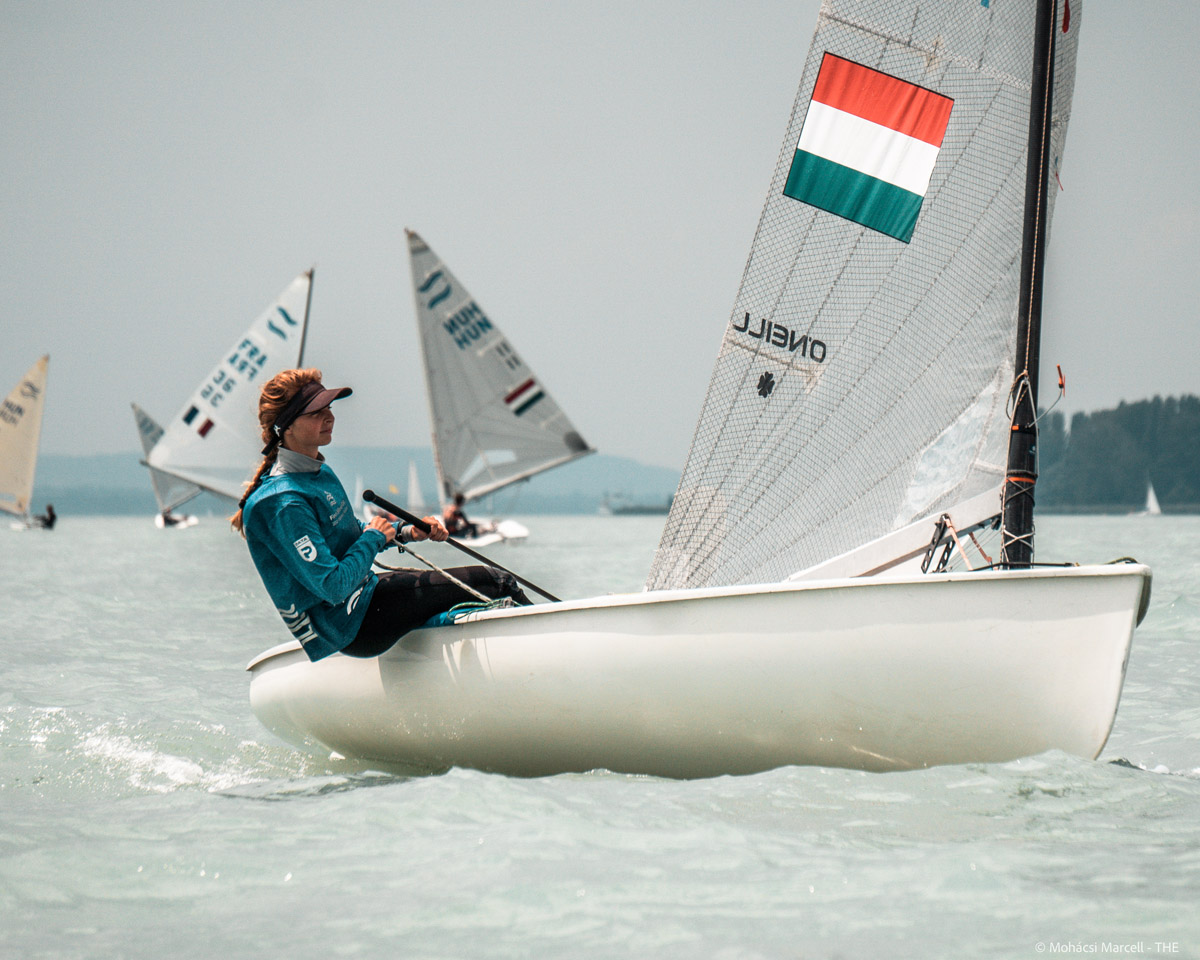 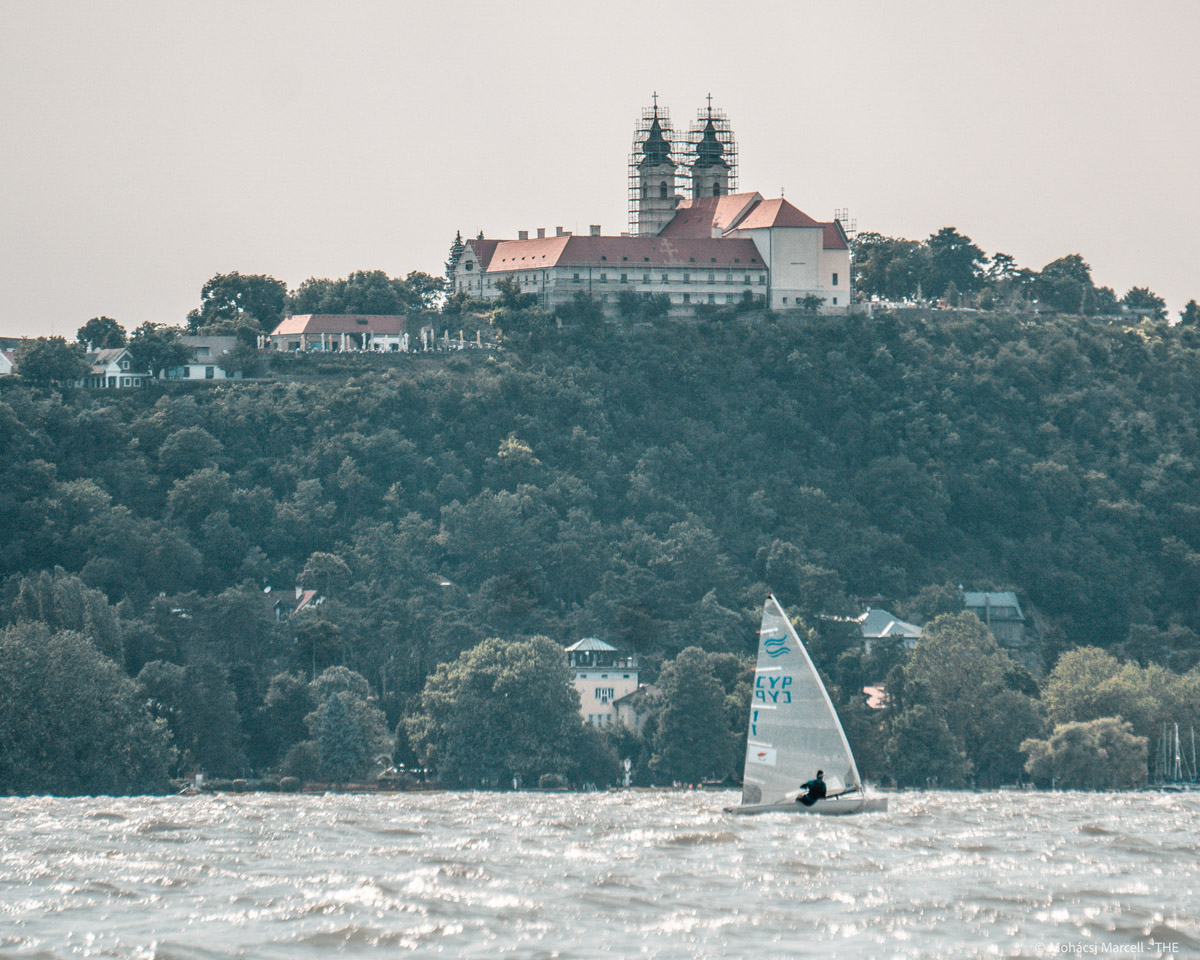