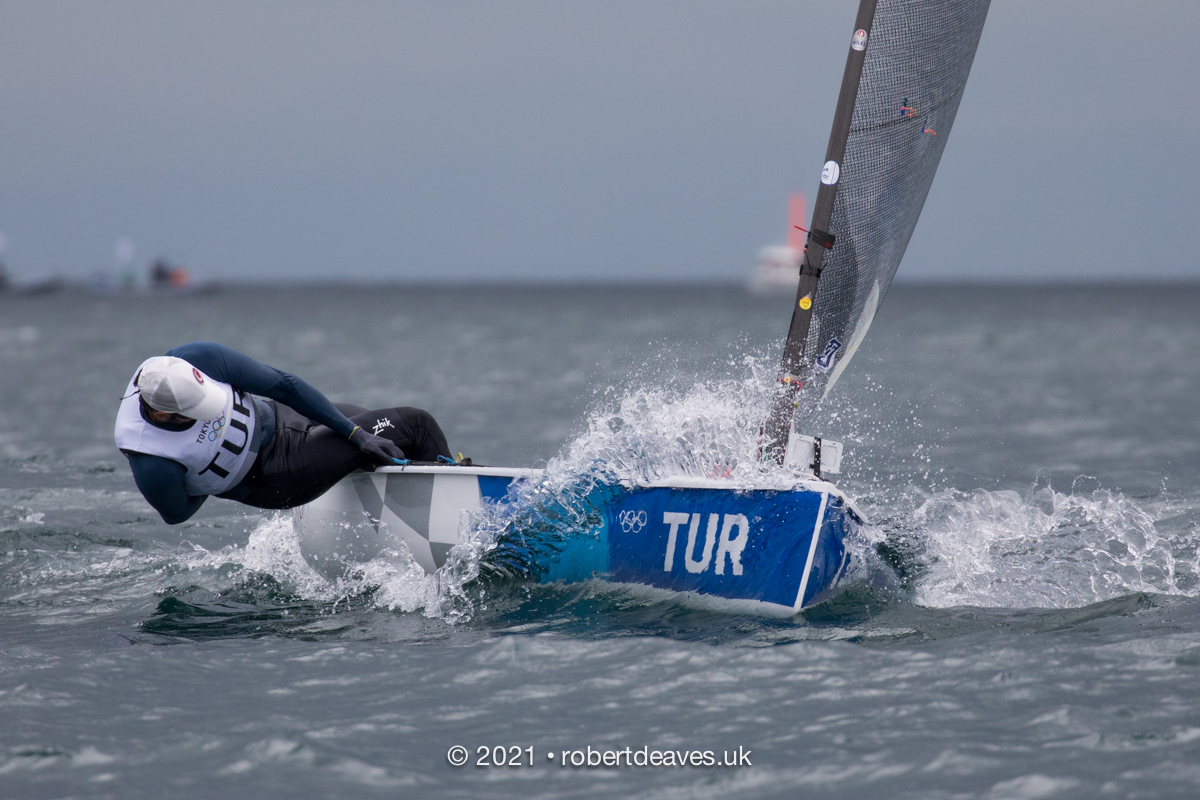 Turkey’s Alican Kaynar made a perfect start to his third Olympic Games with two bullets on one of the most difficult course areas in Enoshima. Hungary’s Zsombor Berecz picked up two second places while Spain’s Joan Cardona ended with two third places, after leading the final race all the way until the final downwind. With two very different races, it was a difficult start to what will be a long regatta.

A change in the air was forecast for Tuesday and with overnight rain and a rapidly closing in, but downgraded typhoon, it was not going to be the easiest of days on the water. Heavy clouds, with intermittent sunshine, provided the ever-present threat of rain, while an early moderate to strong offshore gradient wind that gradually died off produced shifty and puffy racing conditions kept everything open until the finish line.

For the Finn class, tucked up under the land on the Kamakura course area, it was a difficult day of two distinct halves. The first race was sailed with the top mark under the cliff and was a real case of snakes and ladders on speed. Then after more than two hours waiting, the wind spun through 180 to set up a great second race in a solid onshore breeze. 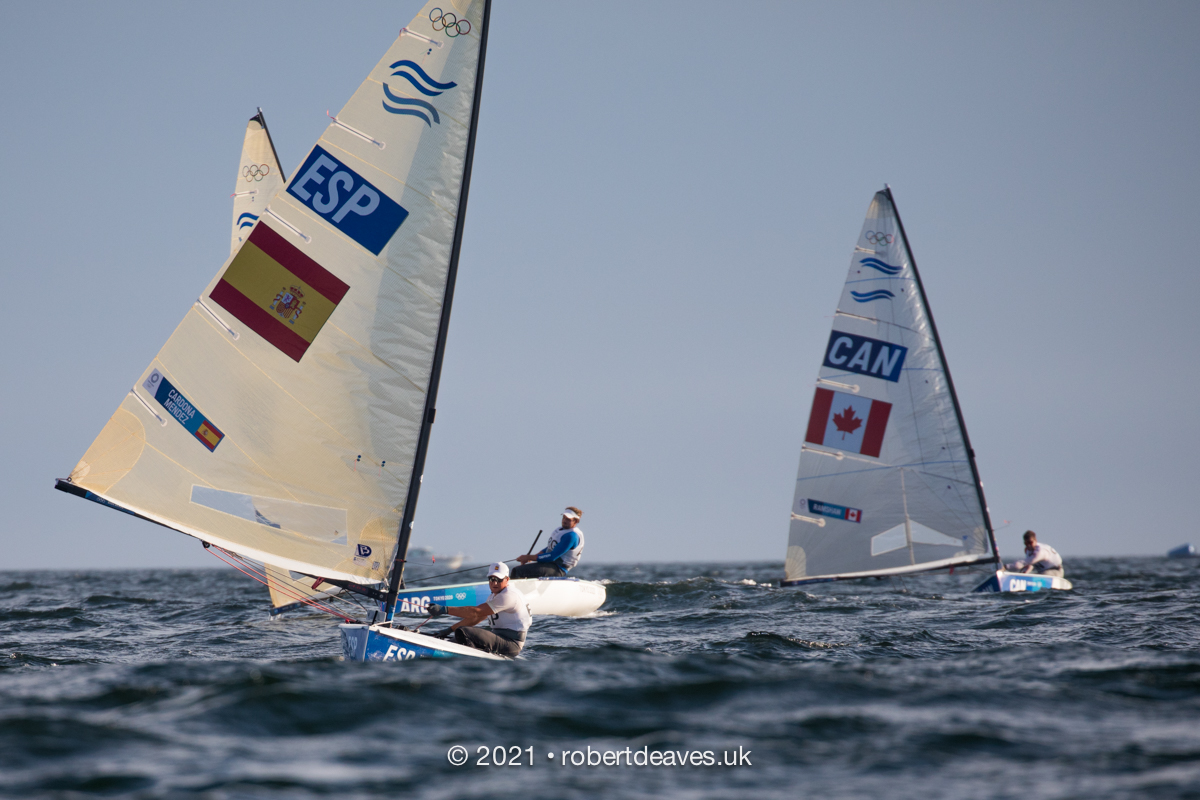 In Race 1 the left side appeared favoured on the first upwind with Brazil’s Jorge Zarif leading round from Cardona and Kaynar. During the next three laps, pretty much everything changed. The snakes were particularly slippery, while the ladders had found second gear. Several boats found themselves at the front and back on successive legs.

However it’s where you finish that matters and Kaynar made the best of the final upwind and a huge wet shift to the right to round first and lead down to the finish while many front runners got stuck on the left. Berecz ground out second place after a sailing most of the race in the top six, while Cardona lost a bit but managed to hang onto third.

Several of the favourites were deep, never recovering from the first upwind. The Netherland’s Nicholas Heiner got stuck on the right on the first upwind and never quite got back into it, though he did take six places on the final downwind. Britain’s defending Olympic Champion, Giles Scott, sailed the race mid-fleet and never broke through, while 2019 world champion, Josh Junior, from New Zealand, took a penalty turn on the first beat and never really recovered.

By the time the last boat finished the wind had all but been sucked away, presumably by the approaching scaled down typhoon. After a small shower the skies cleared and a new breeze started to develop from the land. However out to sea the dark ominous clouds remained so it was never looking particularly long lasting. It gradually shifted round to the left and one attempt to start was made before another huge left shift.

By then things had settled down and after the course was reset again, Race 2 got underway in 10-12 knots with free pumping throughout. Cardona, the youngest sailor in the fleet, was in charge from the first mark, building a nice lead from Kaynar and Argentina’s Facundo Olezza. That’s how it stayed for the next two laps and with the final round made shorter, Cardona seemed to be heading for the win. However the onshore breeze had caused the waves to build to allow for surfing, and Kaynar and Berecz found some extra speed to pass the Spaniard for a repeat 1,2,3 from the first race. 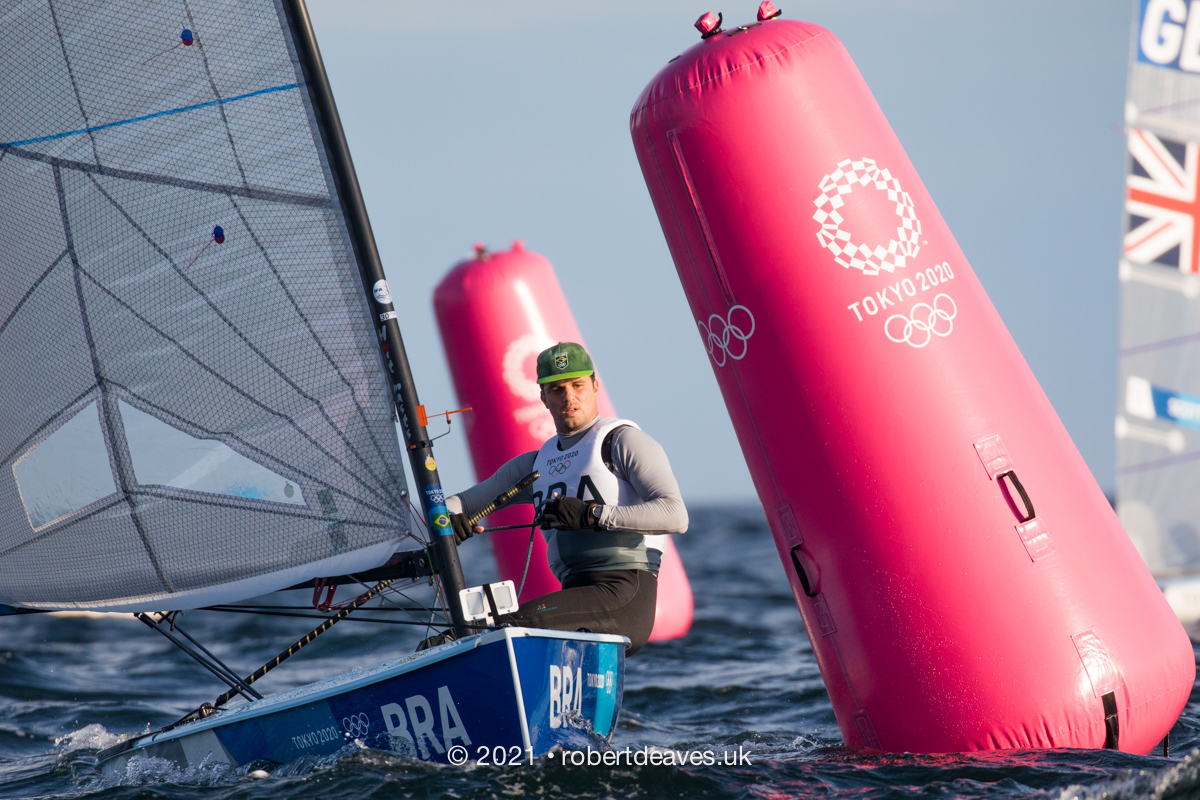 Kaynar said his goal for the day was to be consistent. “…and I think I managed to be consistent today. The two races were quite difficult, but very different. The first one was about seeing the wind but in the second the downwind was important. It’s going to be a long regatta and I think we are going to have a bit of everything so we need to be good in all conditions.”

Anders Pedersen, from Norway had an up and down day.

“The first race was a bit casino. It was straight under the cliff so it was very shifty, gusty, patchy, everything at the top there. I had a good start but managed to get myself into a bad rhythm and got knocked out by a bunch of others. I finished second last I think. I had a good second round and then a terrible third round.”

On the temperature, “It was a bit cooler today, but we had training days with everything, so maybe we were a bit lucky today that the temperatures dropped a bit or the last race would have been pretty harsh.” 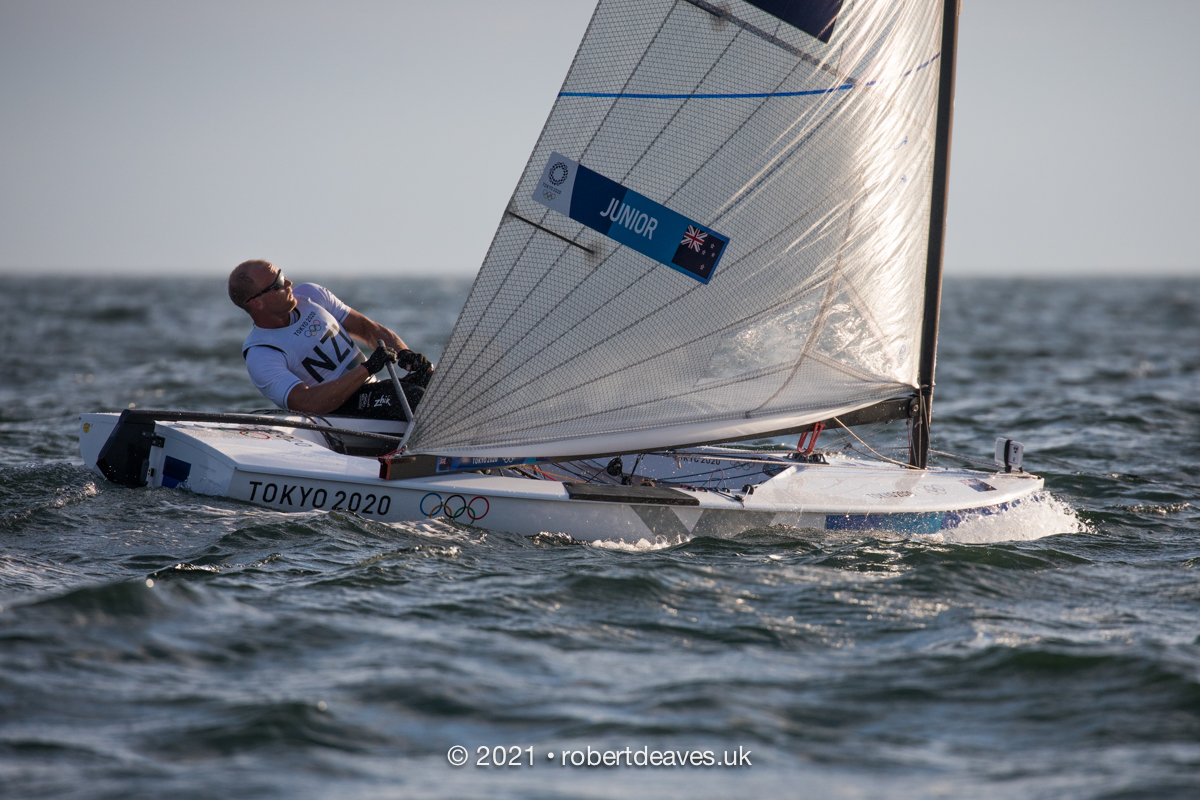 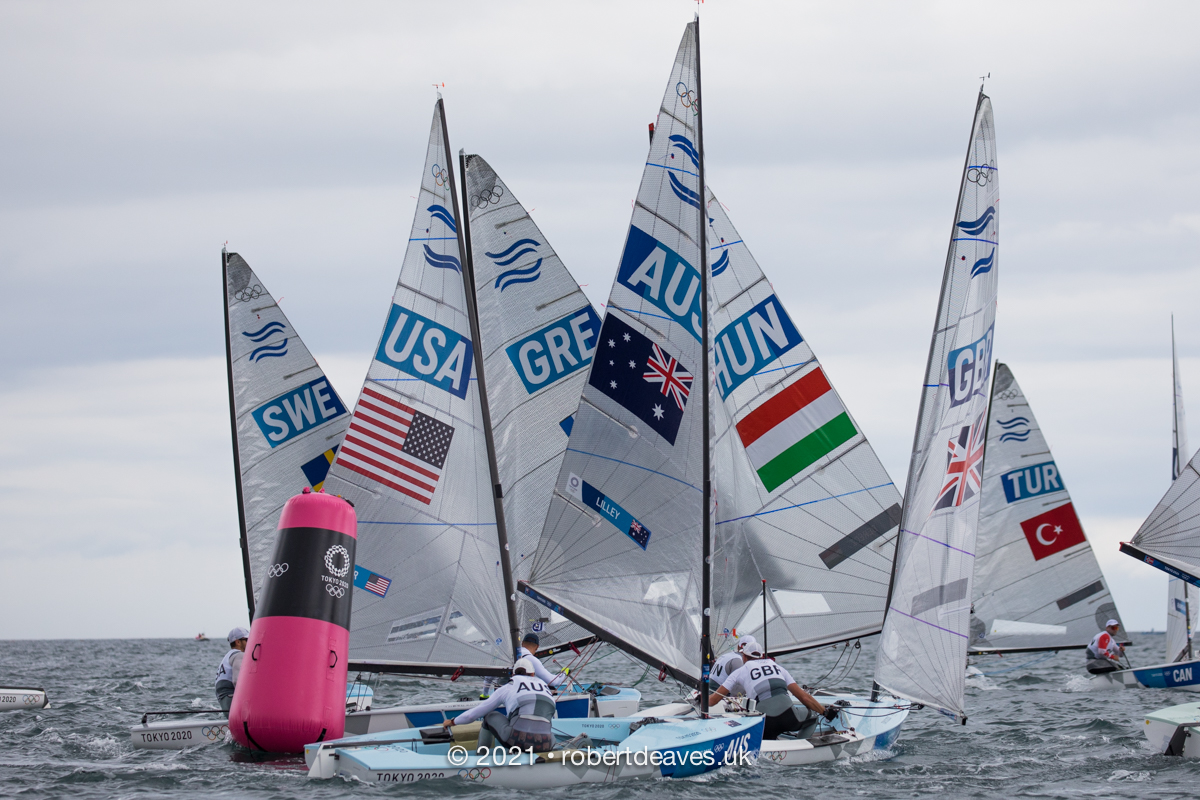 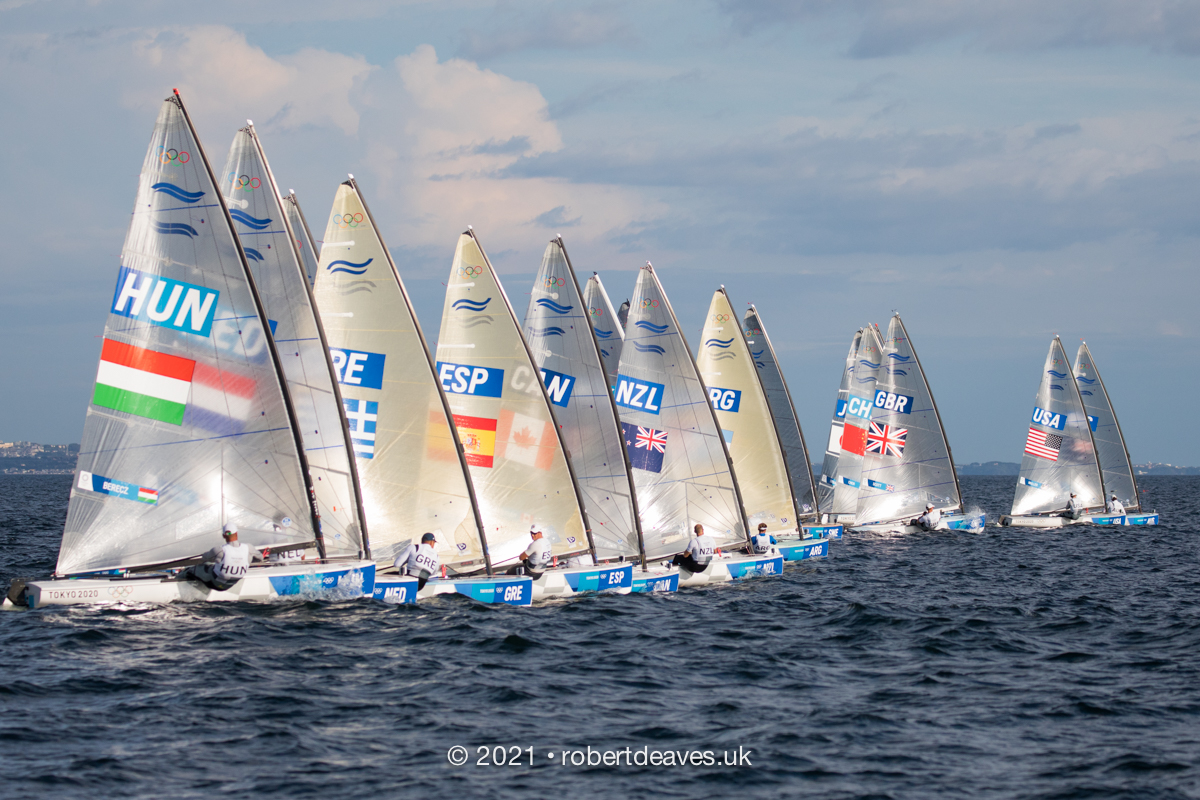 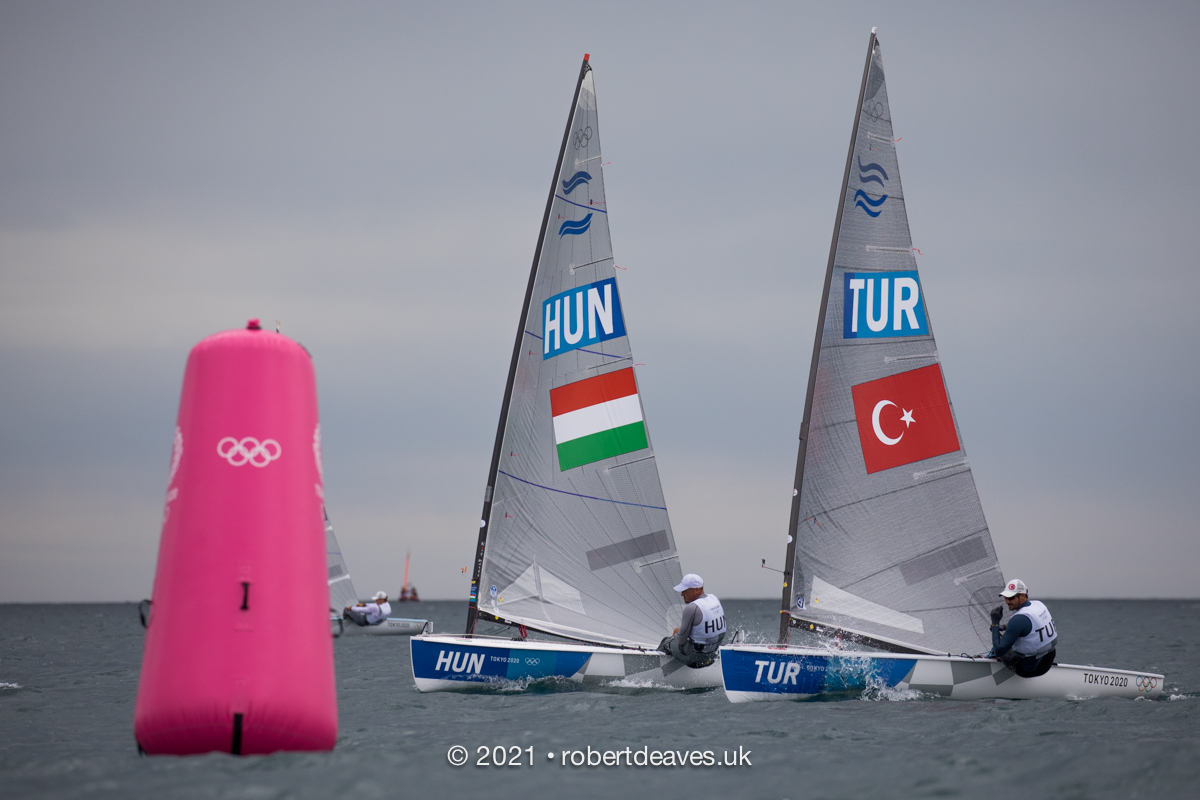