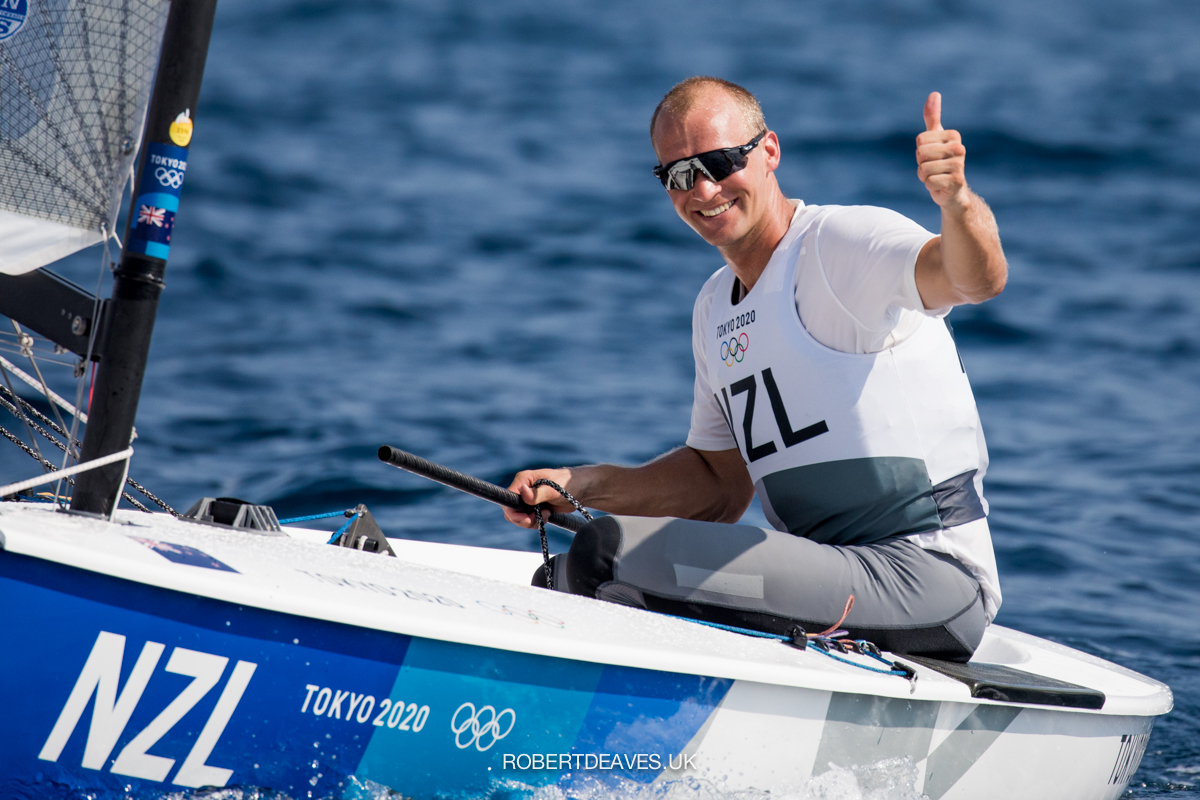 Double America’s Cup winner and 2019 Finn World Champion, Josh Junior, from New Zealand, made the best out of the extremely fickle fourth day for Finns at the Tokyo 2020 Olympic Games. While this moves him within reach of the medals for the first time, the top three remain the same. Giles Scott extends his leads to six points, from Spain’s Joan Cardona and Hungary’s Zsombor Berecz.

After a big comeback in Race 7, Junior ended the day with a 1,4 to move up to fifth overall, just nine points out of the medals. Giles Scott also made a big recovery in Race 7 to post a 6,1, while Cardona had a tough day with a 13,7. Berecz sits another three points back and remained consistent, as he has all week, with a 3,5. Sweden’s Max Salminen also produced a stand out performance to end the day with a 4,2.

The pattern for the day was massive place changing through the fleet in the first race with huge wind changes across the course area and then an incredibly close second race that pretty much restarted at the final top mark as the top 6-7 boats rounded in a close group, and with Oscar flag raised for free pumping, it was a frenetic pump off down to the finish. 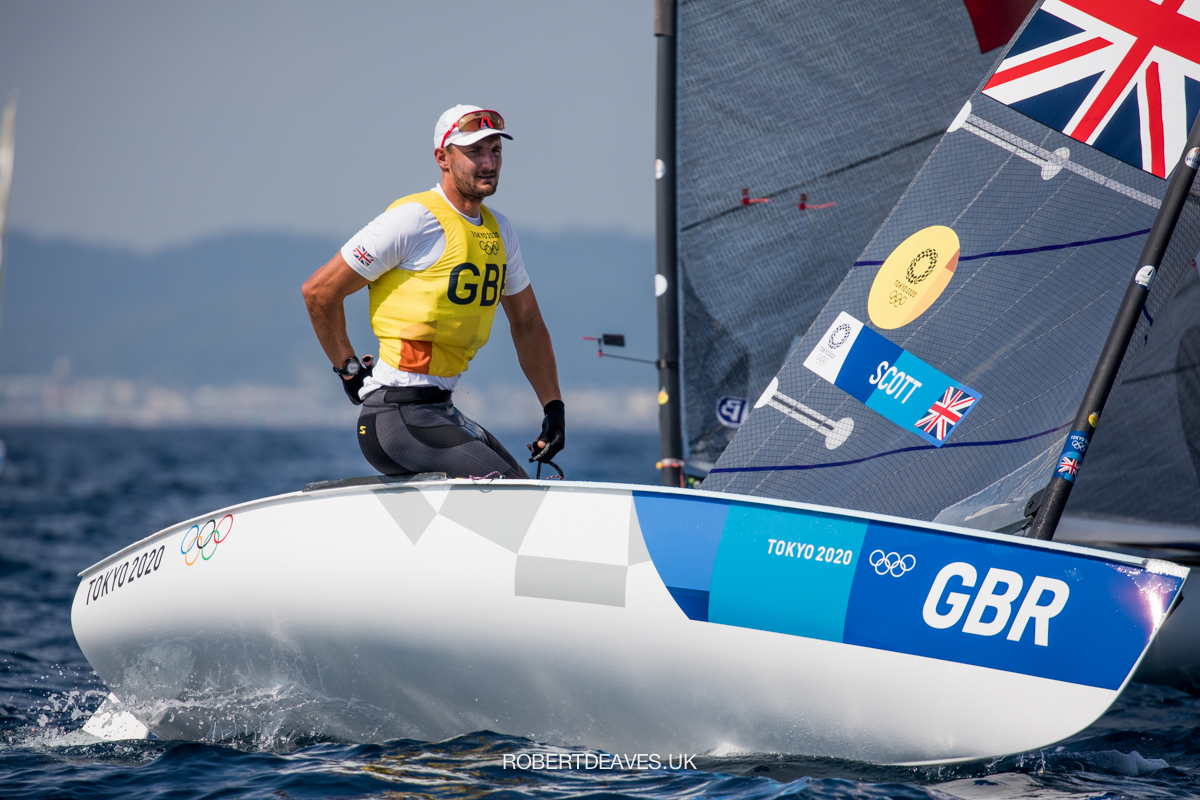 Race 7 started in 5-7 knots and a very patchy breeze. Many of the favourites tried the left, but the right came in strong with China’s He Chen leading round from Mexico’s Juan Ignacio Perez and USA’s Luke Muller. Not much had changed by the downwind gate except Muller was up to second and Berecz had moved to third. However, that’s when it all went a bit funky.

The leaders headed back out to the right, while Junior, in ninth headed back to the left. Half way up he hit more pressure and a header and was more than a minute ahead at the top mark. Salminen went from last place to third, Scott from 11th to sixth, and the leaders ended up at the back. The only two boats largely unaffected were Berecz, who dropped two places and Canada’s Tom Ramshaw who moved from fifth to second. After a long slow downwind, a bemused Junior took the bullet from Ramshaw and Berecz.

The wind improved slightly for Race 8 with 8-9 knots and building to 9-10 knots during the race. Again the left proved popular with Scott emerging mid left to round just ahead of Salminen and Junior. By the gate the fleet had compressed without much change, and at the second top mark, Junior came in on starboard to cross Scott to lead down the run. The top 5-6 boats all rounded within 15 seconds or so and with the wind up to 10 knots, Oscar flag was hoisted for the first time for free pumping downwind.

The ensuing pump-off downwind was a test of stamina and finesse. It looked pretty even most of the way down, before Scott emerged from the group to lead round the gate by just a few seconds. Salminen had moved up to second, with Heiner just pipping Junior for third. The next six boats all crossed within 10 seconds. 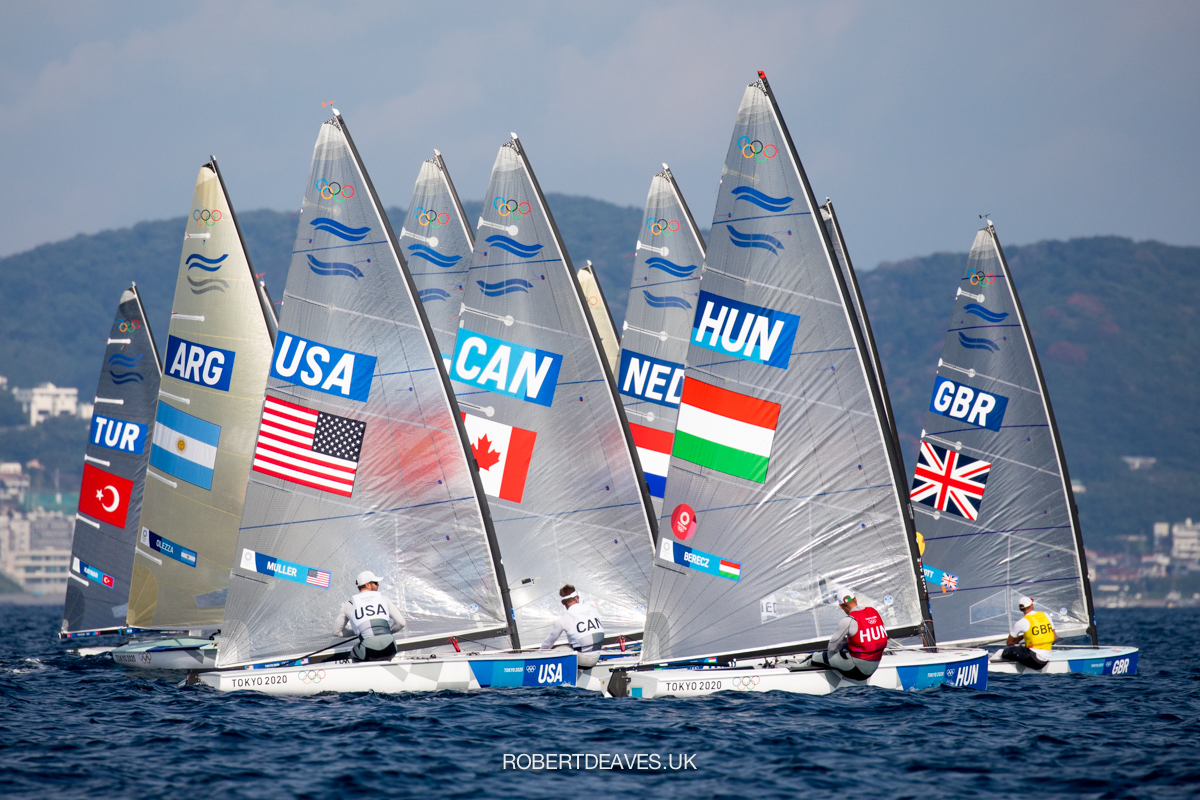 After a tough week so far, Salminen had put in the second best score of the day.

“I finally got it together a bit better. And it was the right day to do so. It was tricky. We knew that. Two fighting winds and waiting onshore for a long time and once we got out there it hadn’t really settled and I wouldn’t say it did the whole day either. It was swinging around, but I had a quite clear plan and it worked for me today.

“I went left both times. You had to be brave and trust in what you believed on that second beat and it paid off really well.”

He was encouraged by the final downwind.

“The last downwind was a tough grind and mentally really, really satisfying to catch some boats there. And in this heat it’s taking its toll on everyone. The waves there were, though mainly in the way than giving you surfs, and were going slower than we were, so it was a proper grind.”

He is now up to seventh overall, but still 20 points off the medal positions.

However, “I will do my all for a chance to fight for the medals on the medal race day.”

The big man of the fleet, Australia’s Jake Lilley, ended the day with a sixth place to sit in ninth place overall.

He commented, “It’s been good to have a range of conditions to mix it up and I think that’s what you want at the Games and to see the right guys rising to the top. It’s going to be a pretty interesting over the next couple of days.

“I have been struggling a little bit but just happy to be here to be honest considering the last two months or so. We’re just doing what we can and making the most of every day.

“I had a good race to finish the day in little bit more breeze and got a couple of shifts that helped, so putting it together, but lacking a bit of that old x-factor which you need to bring to the Games.” 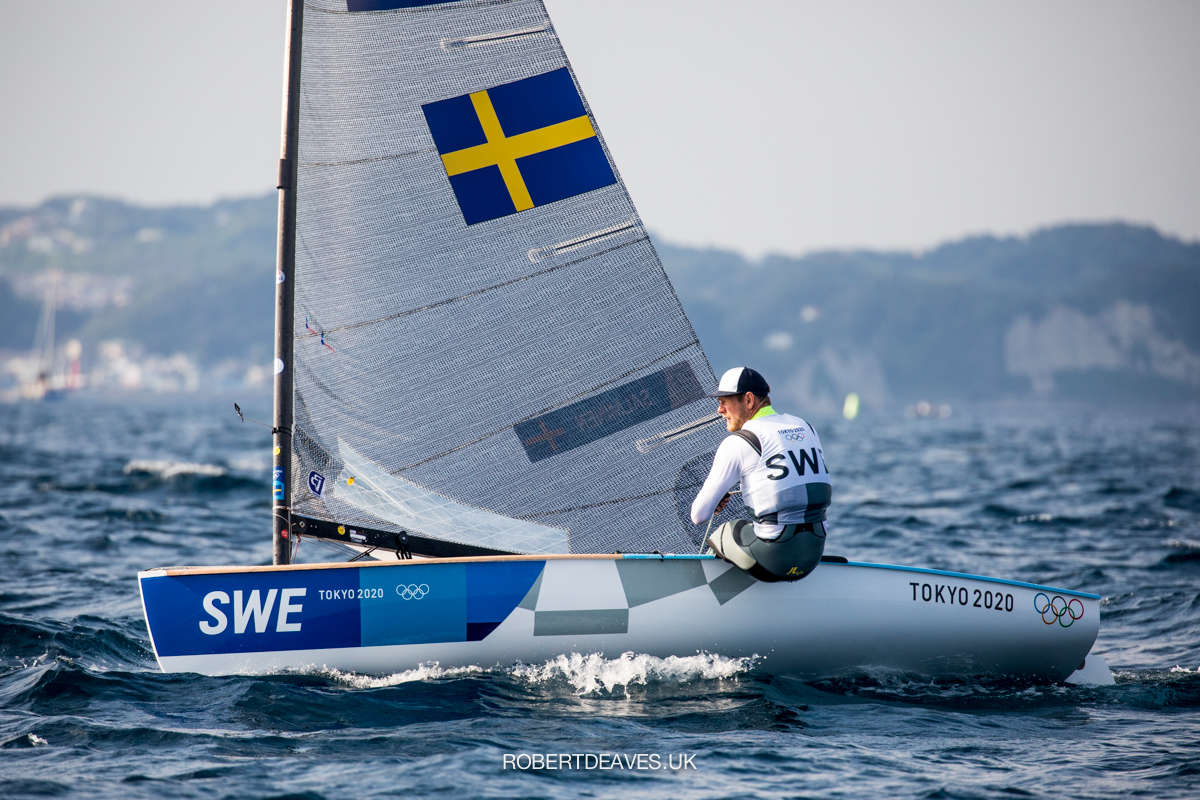 “It was super fickle, and I’d be surprised if anyone knew what was going to happen going into that first beat. It was really quite tricky and the pressure came in from that right side. I just continued off the line and myself and Joan found ourselves on the left with a bit of work to do. I didn’t go quite as hard left as JJ did on the second beat but took a big chunk of that gain and got back up to sixth, which in all honesty was a good rescue for me.”

Describing the wind in these conditions, “It’s so hard. That sea breeze is so, so light. I hedged to the left in the second race for sure, but in the first one we really didn’t know.”

On the final downwind, “Fortunately it was late in the day so it wasn’t as hot as it could have been, but it was pump-off. The fleet was super tight and fortunately I managed to get my nose out.”

But it was still hot, “It just nukes us when we get 10 knots and have to pump into the finish when we are so close like that.”

Junior was relieved to have posted some good results to bring him into contention.

“Today was as tricky as any other day. I probably came out on the right side of it with a bit of luck at times and managed two good results so pretty stoked with that and can’t wait for tomorrow.”

In the first race of the day, “I didn’t sail a very good first beat, but the wind was just shifting all over the place and I was mid-fleet on the downwind. There was a lot of pressure on the left and a good shift. I think a lot of people saw it but weren’t prepared to take that big a risk to go that far left to get it. I am certainly trying to sail a bit more proactively to try and win races so I was happy to go and chase it down and take the race win.”

On his form so far. “It’s the Olympic Games; it’s pretty tough. Everyone is sailing really well and if you are not on top of it then you get punished and I think that’s what’s happened to me so far but, you know, I’m still in it surprisingly and I just have to keep chipping away. There are still three more good races to go and I just want to get out there and do it.”

The Finn fleet will complete its opening series on Sunday with two more races on Fujisawa race area from 14.00. The medal race for the top 10 is scheduled for Tuesday at 14.30. 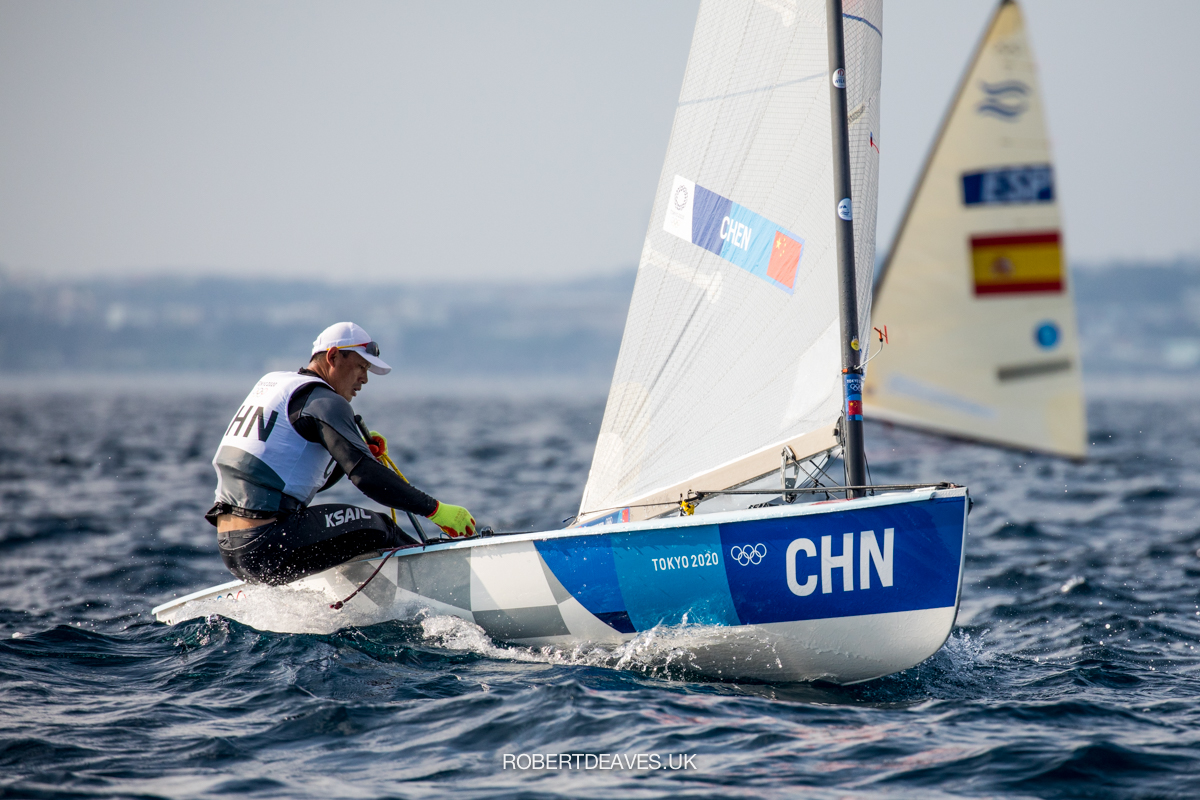 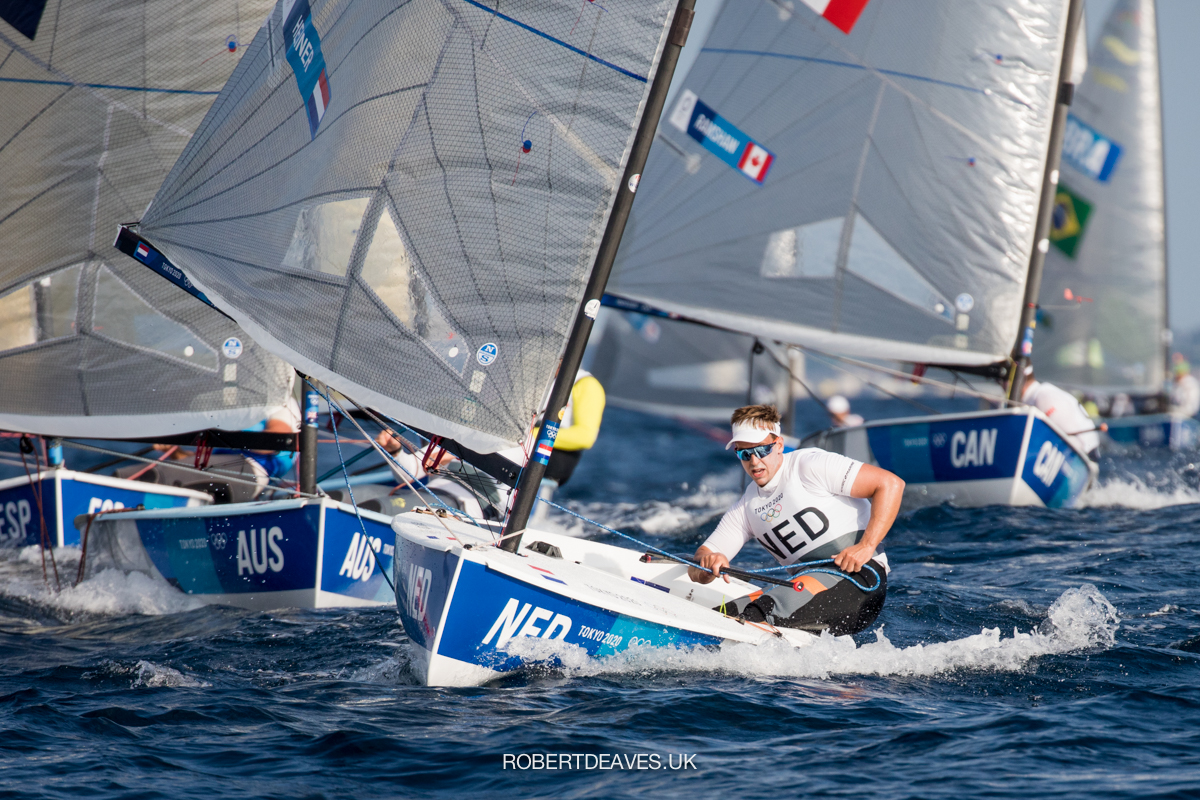 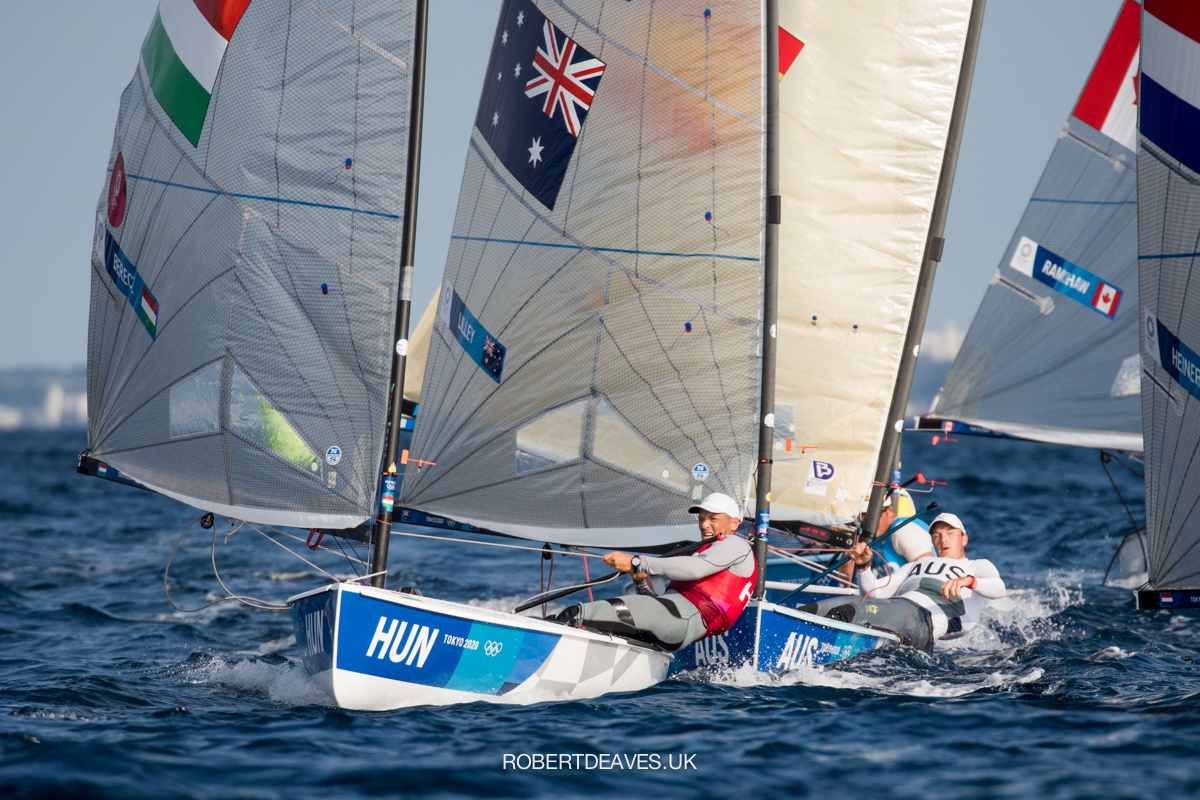 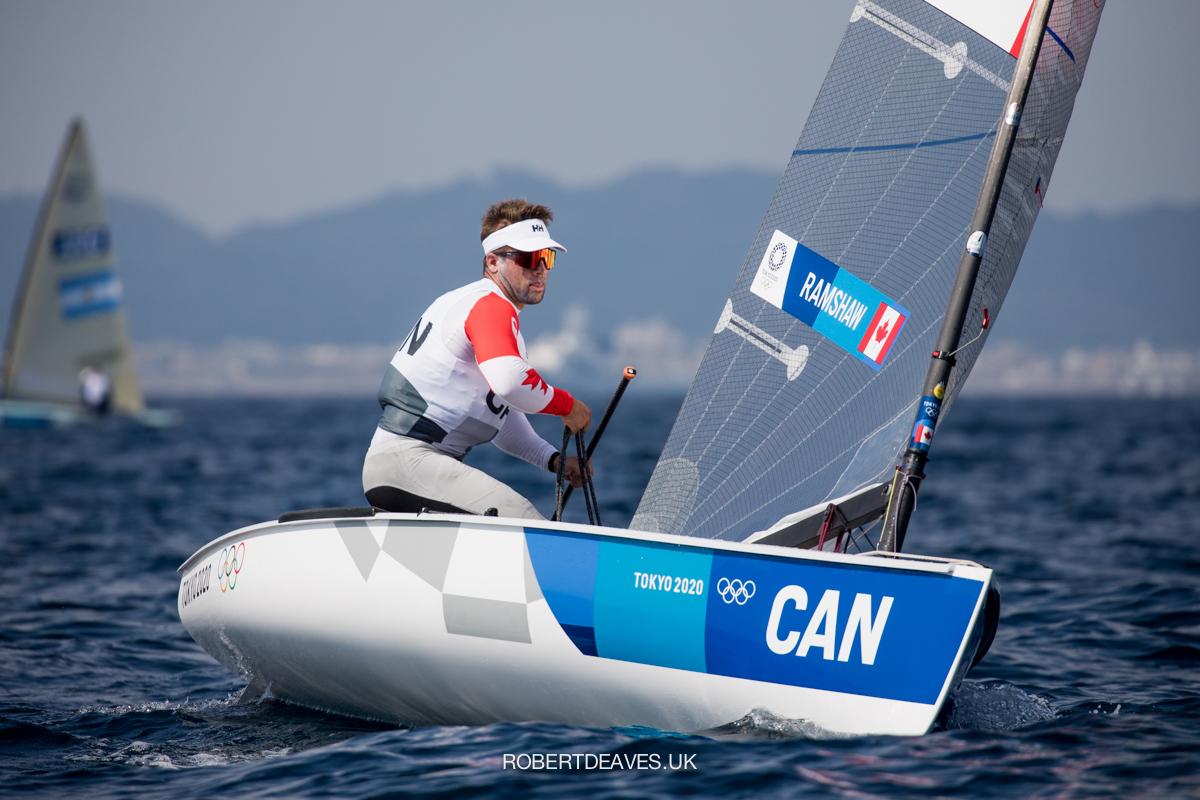