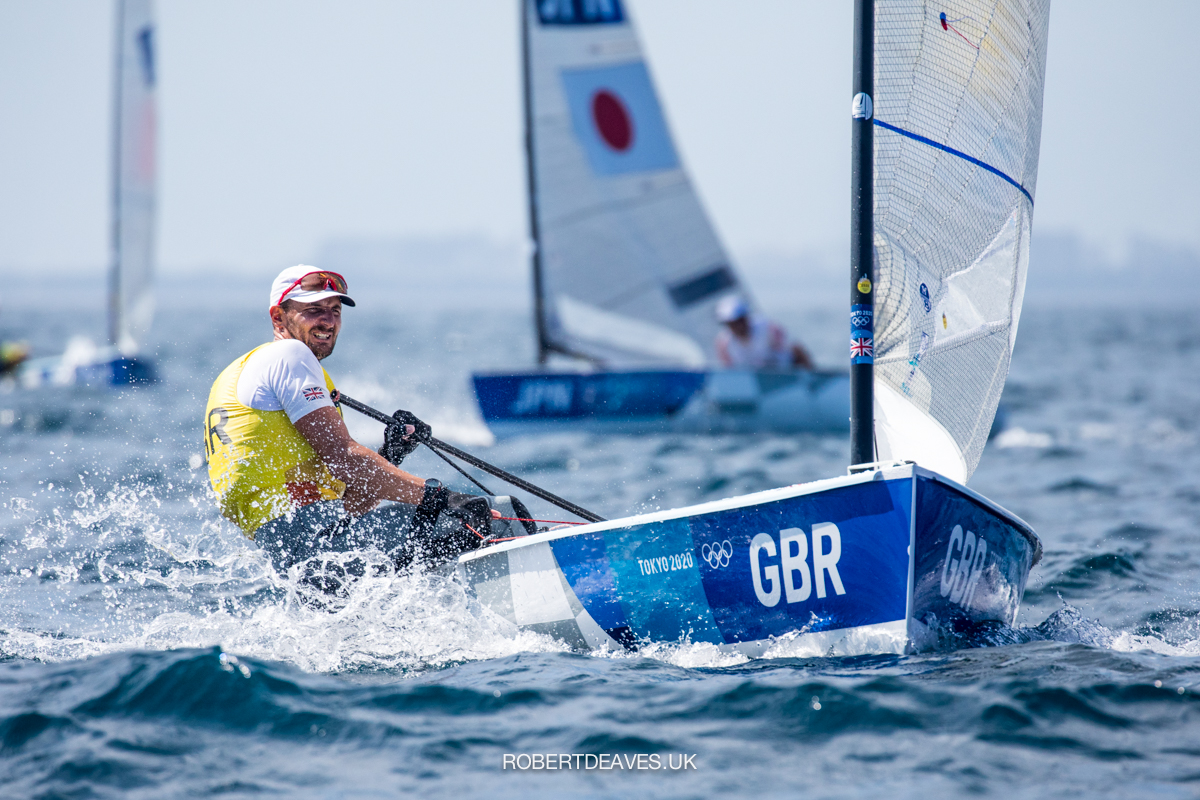 Six sailors will go into the Finn medal race at the Tokyo 2020 Olympic Games on Tuesday with a shot at a medal after the final day of the opening series on Sunday. The race wins went to Giles Scott, who led Race 9 from start to finish, while New Zealand’s Josh Junior won the final race after sniffing out a shift on the left and taking the lead on the second upwind.

After a week of very different conditions, the final day of the opening series, and what could well be the last ever day of fleet racing for Finns at the Olympics, was near perfect, with clear skies, 31 degrees, 10-12 knots of onshore breeze and simply scintillating racing from the fleet of 19 Finns.

No one was giving anything away in the final races, which were crucial to many to secure paces in Tuesday’s medal race.

After picking up a 1,7, Scott takes a nine-point lead into the medal race and is 19 points ahead of fourth place, meaning he has now all but secured one of the medals, but needs to decide the colour. Hungary’s Zsombor Berecz continued his incredibly consistent series and has moved up to second after a 4,4. He sits two points ahead of Spain’s Joan Cardona, who picked up a tough 5,8 today.

Behind them three more sailors have medal chances. Fourth placed Junior scored 8,1, to move within eight point of bronze. Meanwhile, The Netherlands’ Nicholas Heiner and Argentina’s Facundo Olezza are both 13 points behind bronze. Olezza had the best day on the water with a 3,3.

It’s interesting to note the high standard of skills and sportsmanship within the fleet. All 10 races got away first time with no one over the line on any start. In addition, there has not been one protest all week 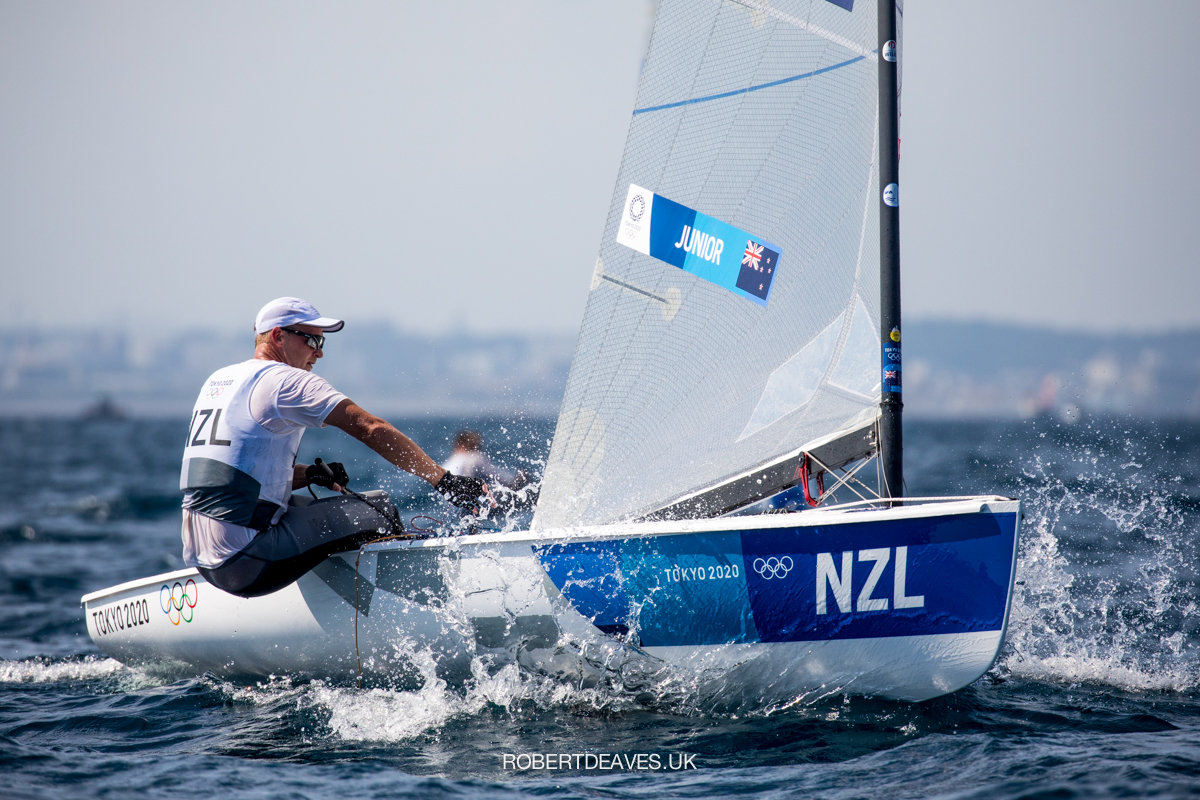 Scott led Race 9 from start to finish, dominating the right and extending away downwind for a comfortable win. Norway’s Anders Pedersen and Brazil’s Jorge Zarif followed him round the top, but by the gate, Australia’s Jake Lilley was up to second and stayed there until the finish. Olezza had rounded the top mark in eighth, but a great downwind and second beat moved him up third.

Olezza then led round the top in Race 10 from Lilley and Canada’s Tom Ramshaw. Junior had wanted the right on the first beat and rounded in fifth, but on the second upwind went almost all the way to the left hand corner and took over 40 seconds out of the fleet. Ramshaw was second and the two began a pumping battle down the final run, well clear of the chasing pack. Junior had the inside track at the gate and the two crossed the finish little more than a boat length apart. Olezza picked up another third place.

After a difficult week, Lilley put on the joint second best performance of the day, finding the front in both races to post a 2,6, though he is too far adrift to win a medal.

“It was a better day. Rafa [Trujillo, his coach] helped me find an extra gear so that helped things and I put it together a bit better.

“It’s been a great regatta. Tokyo has put on all the conditions, and more than we expected we were going to get, so that’s all you can ask for from an event like this.  They have put on such a fantastic show and everything has run so seamlessly. Couldn’t ask for more.”

Ramshaw also closed out the opening series on a high and just made it into the medal race.

“I definitely had a bad start to the week, and made three big errors in the first four races. I took the rest day to rethink it and take it race by race and managed two seconds and that was enough to squeak me into the top ten, so really happy with that. And now I will just give it my best shot in the medal race too. I’m too far out for the medals, but that’s OK. I’m fine with that now.”

Reflecting on the week, he said, “It’s been great sailing conditions and the guys have been sailing really well. Even though you train so much with these guys, and it just felt like normal racing and was pretty enjoyable sailing, it was the hardest sailing I’ve ever done.

“I enjoyed the last two days especially when I started sailing a bit better but I can’t ask for much more. It’s sad to think it’s the last one but I will go out and enjoy my last race on Tuesday.” 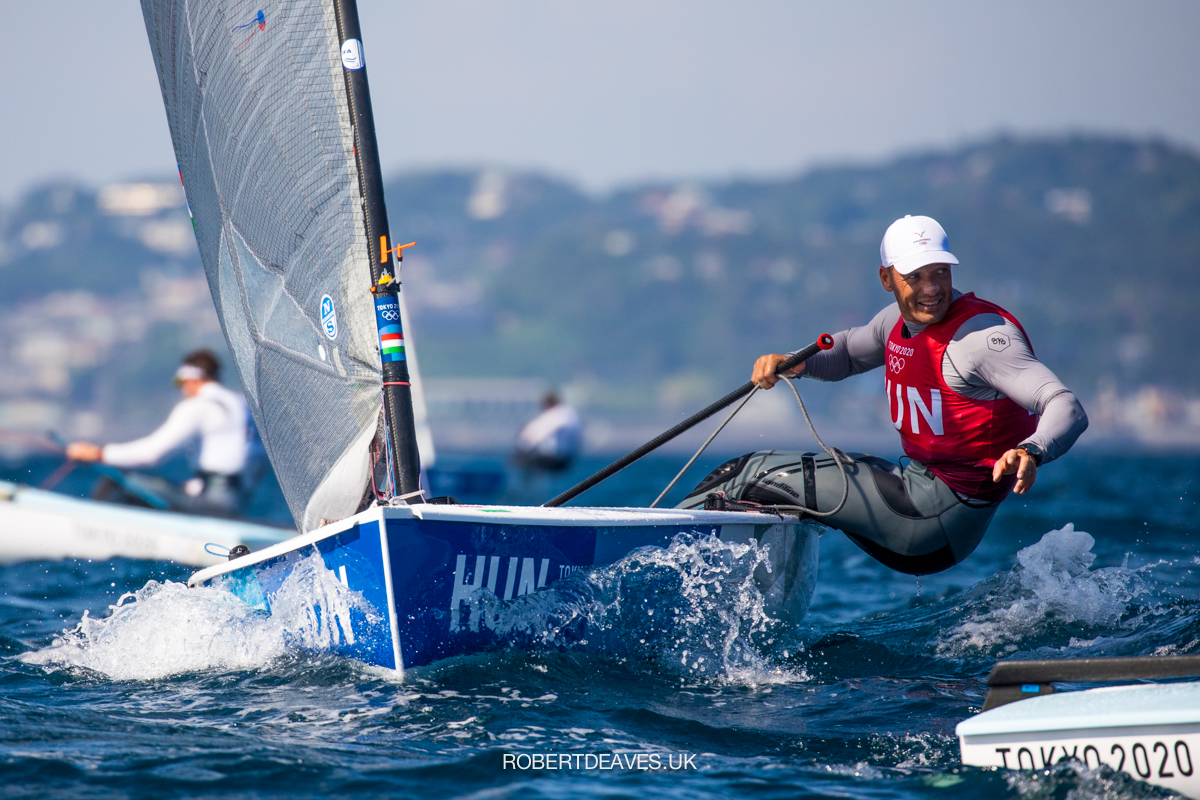 Cardona reflected on his day.

“Today I didn’t have my best day but we were controlling a bit between the top guys in the fleet and I am still in a medal position, so will try to do my best in the medal race to keep it.

“The wind was not easy to understand today.  Josh took a risk in the last upwind and it paid off, so he’s now really in the mix, so I need to do a good medal race to keep in a medal position.”

He said he wasn’t feeling any pressure.

“I was feeling quite good. I was happy with my boatspeed up and down, and I had everything pretty much under control until the last upwind, when I lost a few points, but still happy with my position.”

Yesterday Olezza was closer to the back of the fleet than the front, but was determined today to come out fighting.

“It was hard for me to overcome yesterday’s results but it was a personal challenge. I set myself a goal to overcome this really bad day I had and no matter what, to go out there and fight to the end, and that’s what I tried to do, with all my strength, with all my power and with all my energy. And I gave it my all.”

On the level in the fleet, “There is never an easy race with these guys. The fleet is really strong and everyone is going fast and pushing. It’s been a great week of racing, really tight racing and of course we’ve had everything in wind conditions. But now we have to rest and think of the medal race.” 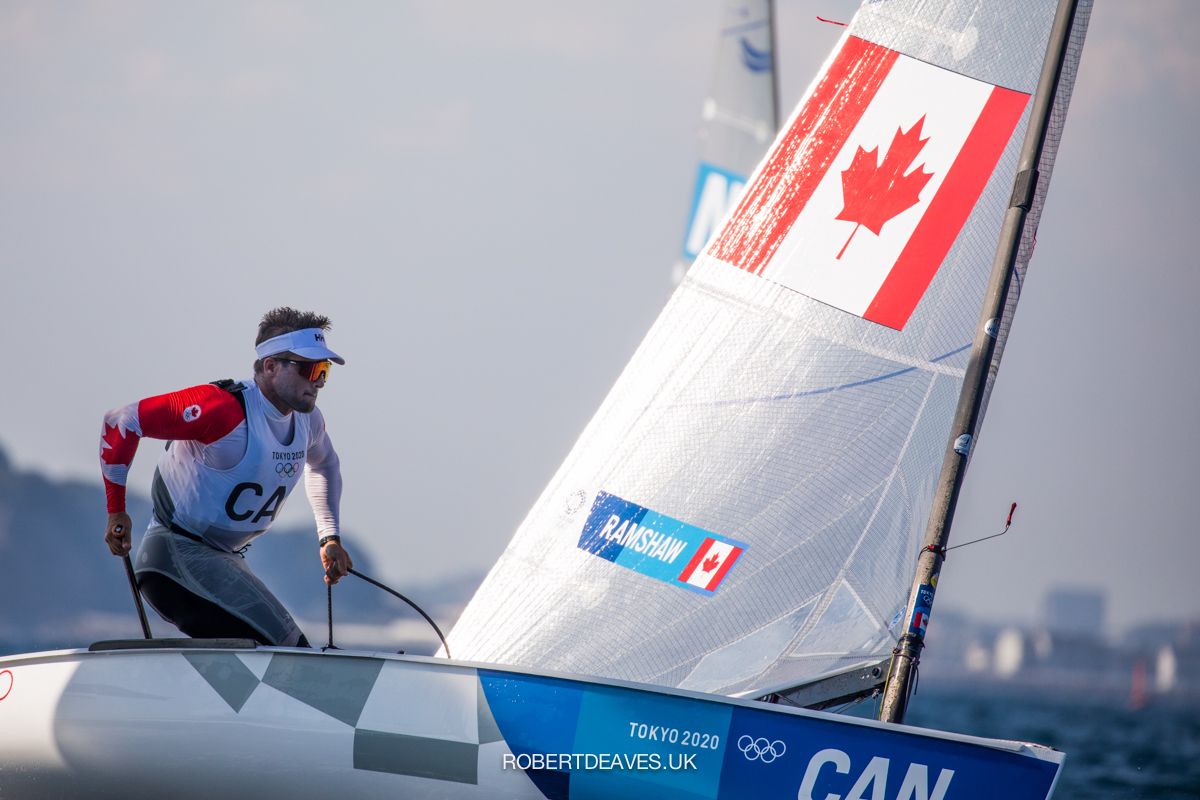 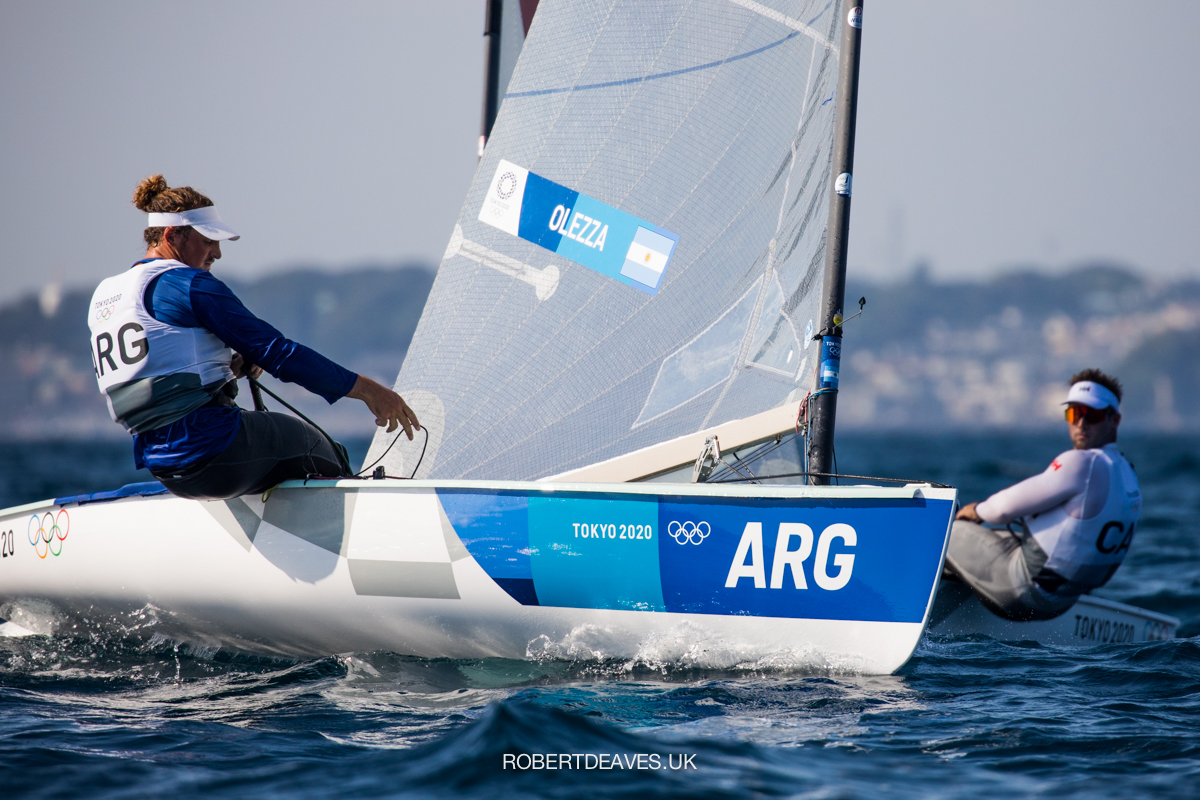 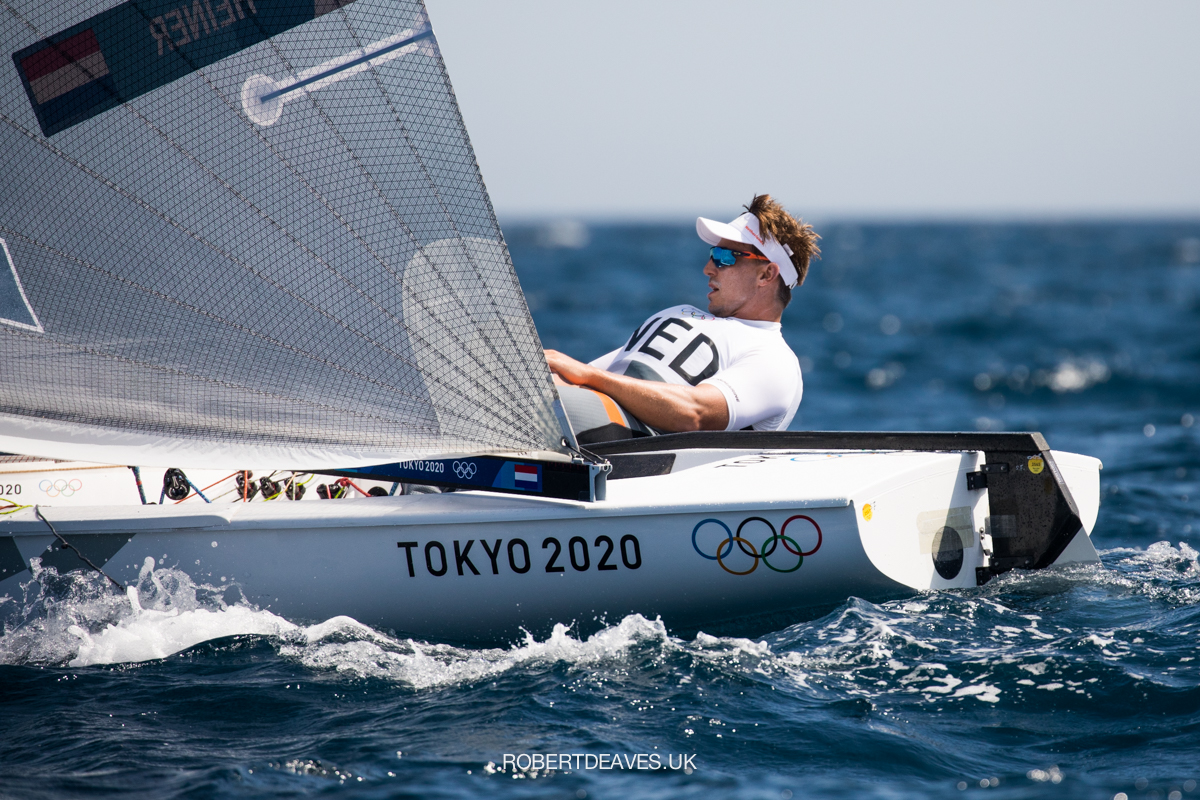 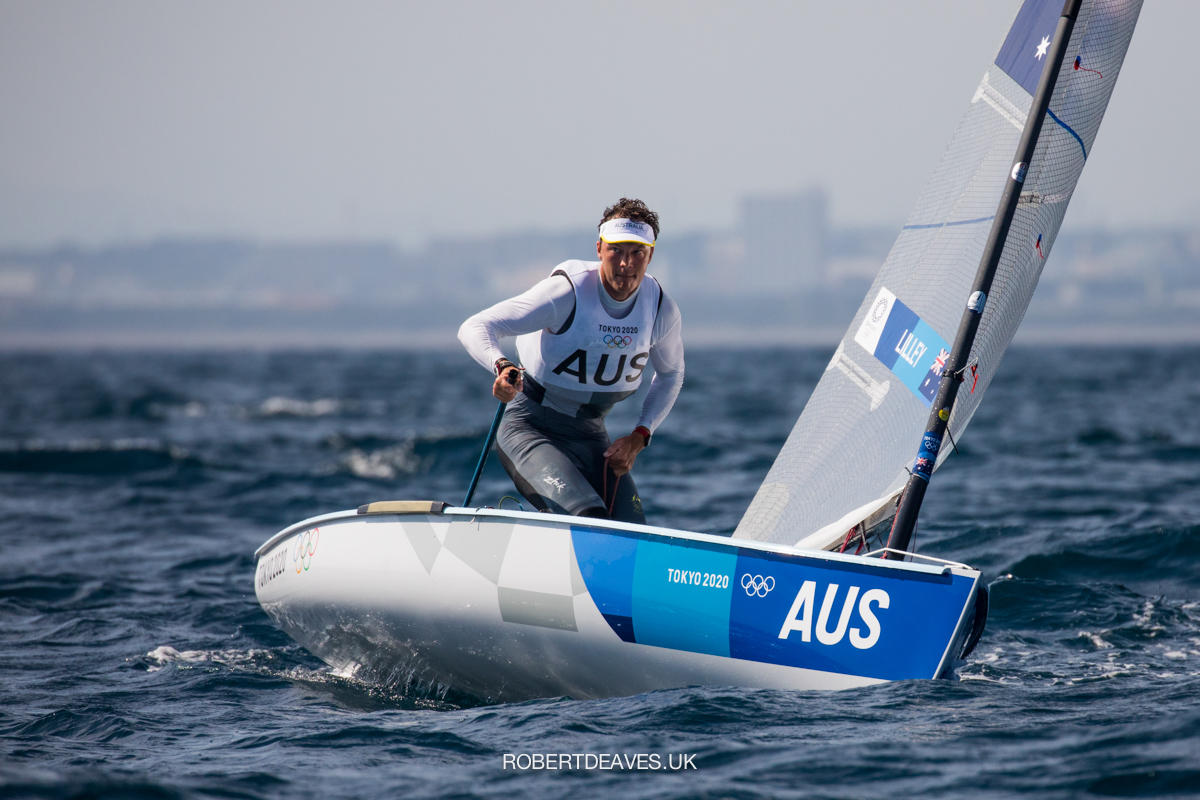