Pieter-Jan Postma, from The Netherlands, found second gear today to dominate the 110 boat fleet from 17 nations on the fourth day of the Finn Gold Cup at Fraglia Vela Malcesine on Lake Garda, Italy. He took two decisive race wins to take a five point lead in the event with just two races to sail.

Oskari Muhonen dropped to second after a start line incident in Race 8 left him in ninth, though he posted a solid second in the second race. Domonkos Nemeth, posted a 6, 4 to move up to third.

The fleet was sent out for a 13.00 start but again the wind took its time to stabilise and the seventh race did not start until past 14.00. Poland’s Bartosz Szydlowski rounded first ahead of Australia’s Rob McMillan and Peter Peet from The Netherlands. Postma round fourth and was in the lead by the gate to sail away and take his first race win of the day and the regatta. After a number of U-Flag disqualifications, France’s Valerian Lebrun finished second with Italy’s Marko Kolic in third. Regatta leader Muhonen, had a start line incident and suffered damage and a leaking boat, which was remedied between races. However he managed to recover to ninth place, despite having a sizeable volume of water in the front tank, also benefitting from several UFDs.

Postma owned the pin in the next race with the wind starting to increase. Her managed the left well and came into the top with a small lead from Muhonen. Postma extended on the run and on the next upwind for a comfortable lead. However with Oscar raised for free pumping Muhonen was on the attack and halved the gap before the finish. Spain’s Miguel Fernandez Vasco just held off Domonkos Németh, from Hungary, for third. 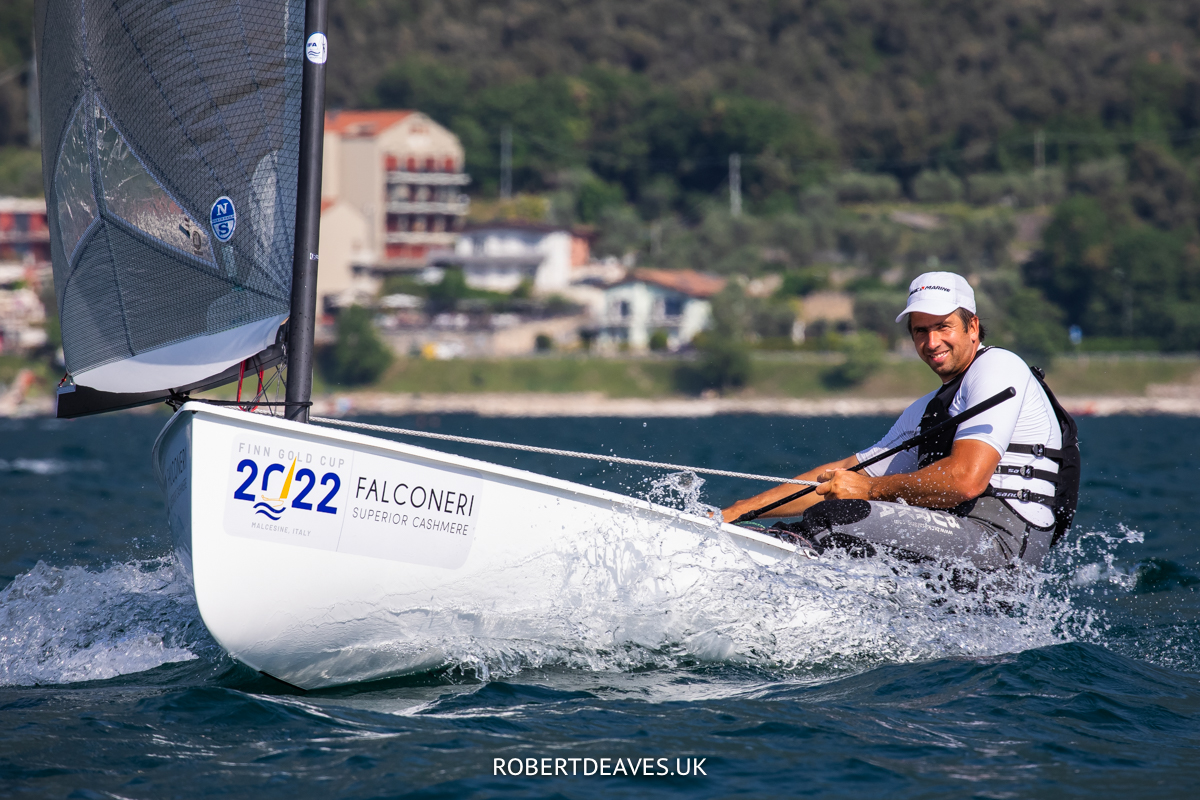 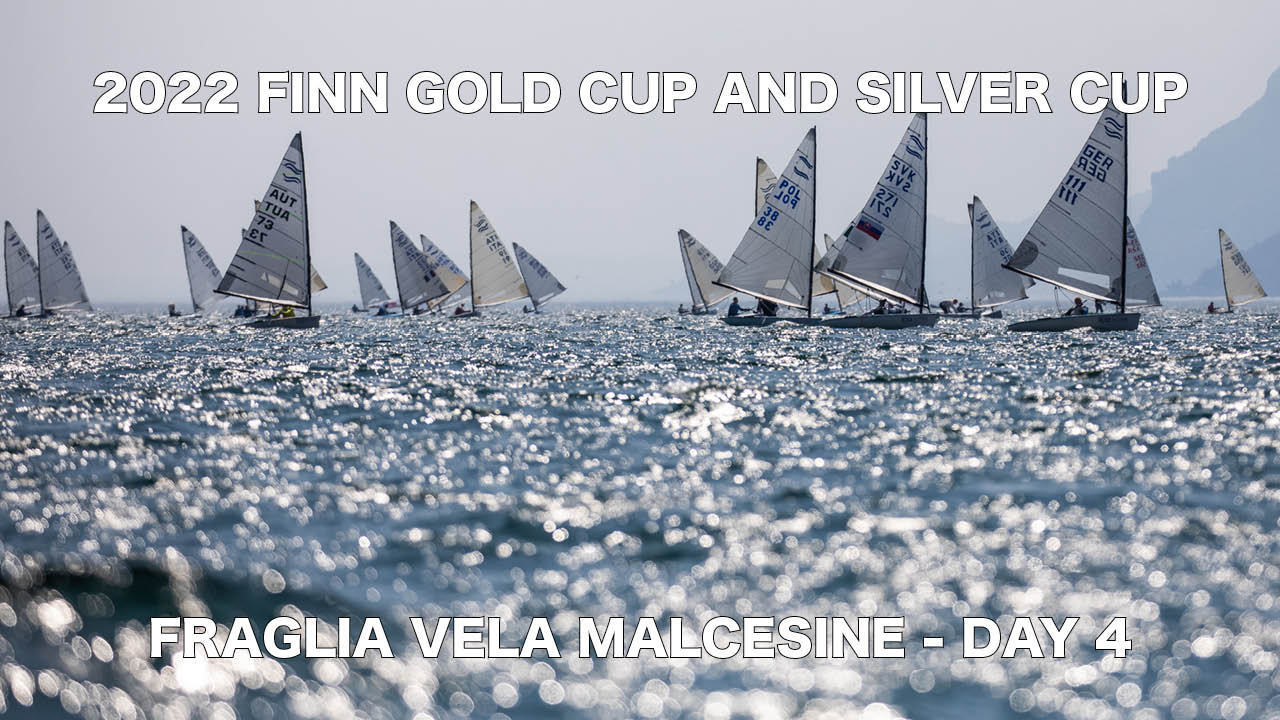 Miguel Fernandez Vasco is up to sixth after a 10, 3 today and is pleased with his performance so far. This is his fourth Finn Gold Cup.

“Today was a windy day with free pumping in the last race and good fight with Domonkos. He’s so fast and strong like a good young sailor. I am so happy because we were training so hard in La Coruña this winter and I am so happy with the results, apart from mistakes in the third and fourth races, but I’ve had several good races as well.

“The Finn for me is a very important part of my life. I learn of a lot from the class as a person, on the sport, and I want to continue sailing, maybe the next Finn Gold Cup in Miami. And I hope everyone continues sailing.”

On Malcesine, “This is a beautiful place, the organisation is perfect. I will come back for another Finn regatta for sure.

“This is a new age for the Finn. I think that all the people sail Finn are those who love the sport of sailing but the thing is, it’s the boat. It’s for people from 80 to 100 kg and for all the ages. It’s perfect.”

Nemeth moves up to third overall after a 6,4.

He said “It was nice today. The first start was not the best but I figured it out quickly and went to the right side. And the Garda weather came back. The machine broke, but now it’s alive again I think. It was basically like everyone said before, especially the second race.

“We had two really good races, and long ones. Tomorrow is the last day and I’m really looking forward to it.”

On his future in the class, “I will keep sailing Finn because I am too big for other boats and I love the power and the atmosphere and the people. At the nationals in Hungary we have 60-70 boats, really big fleets. It’s amazing to have this big community there and I’m looking forward to what’s going to be next for the class.”

So far this week there has been no sailable wind on Garda before 14.00, and with a cut-off on Saturday of 15.00, the chances of two races seem slim at best. Racing is due to start at 13.00, and while Postma and Muhonen have a jump on the fleet, there is still one more day when everything could change – even the famous Garda wind.

It would seem like the Finn Gold Cup is the most popular sporting event in the world right now judging by the fact that every man and his dog seems to be ‚live streaming‘ the event.

However, there is no live streaming beyond the occasional Facebook Live update on the Finn Class Facebook page. If you have clicked on one of the hundreds of spam links on Facebook, and paid some money to see the action, then you will be disappointed as there is nothing there.

We are removing these links, banning the authors and reporting to Facebook for spam on the Finn Class page, but many other Facebook pages have also been bombarded. 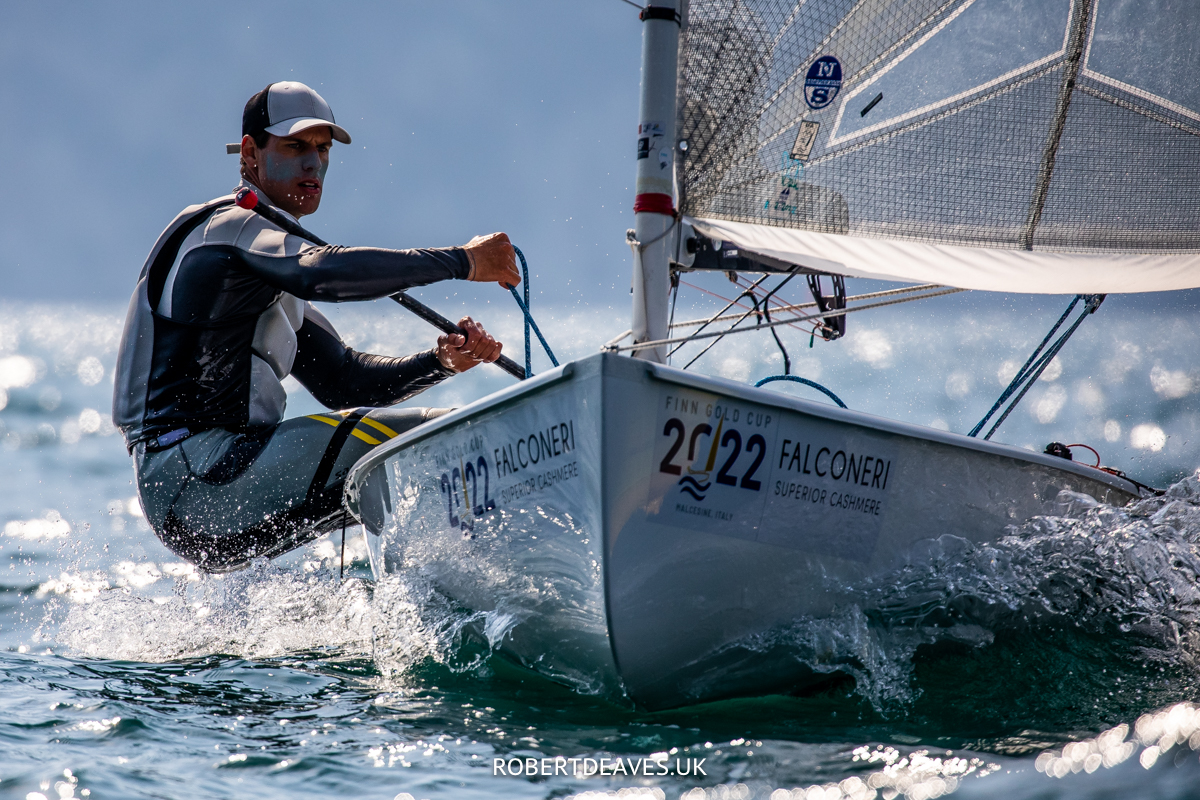 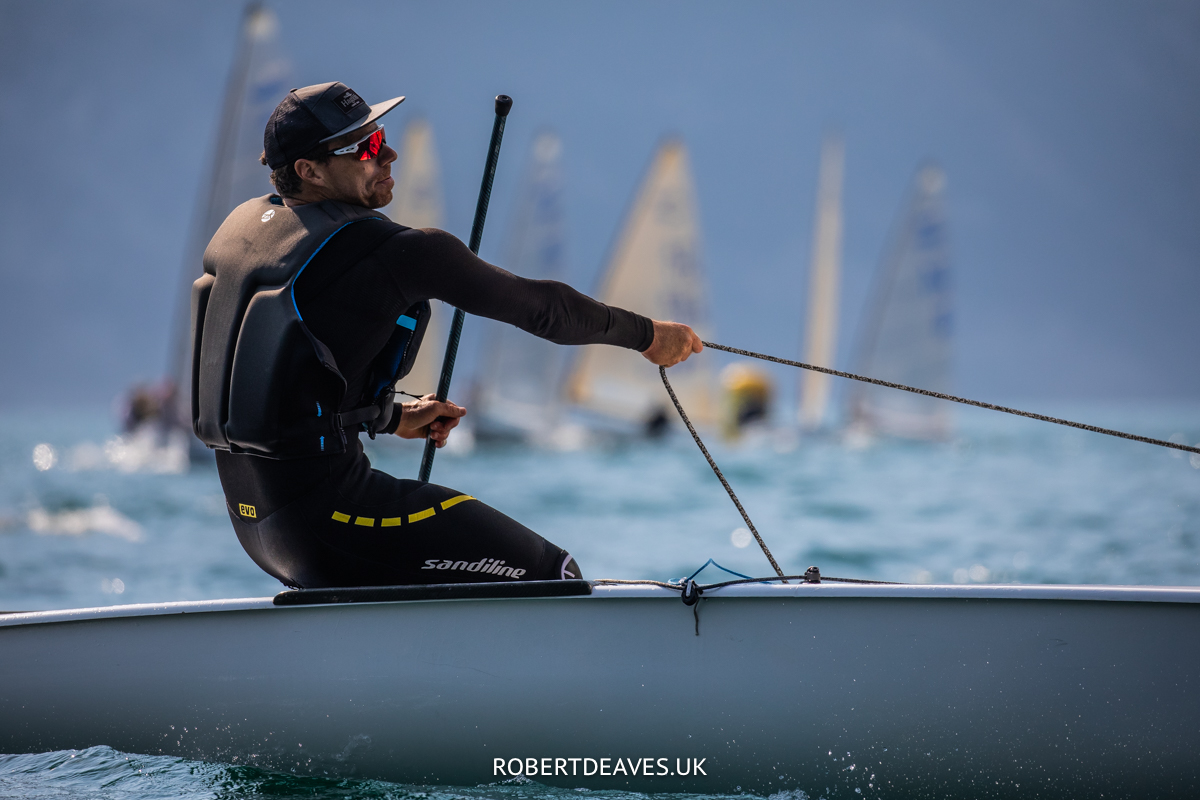 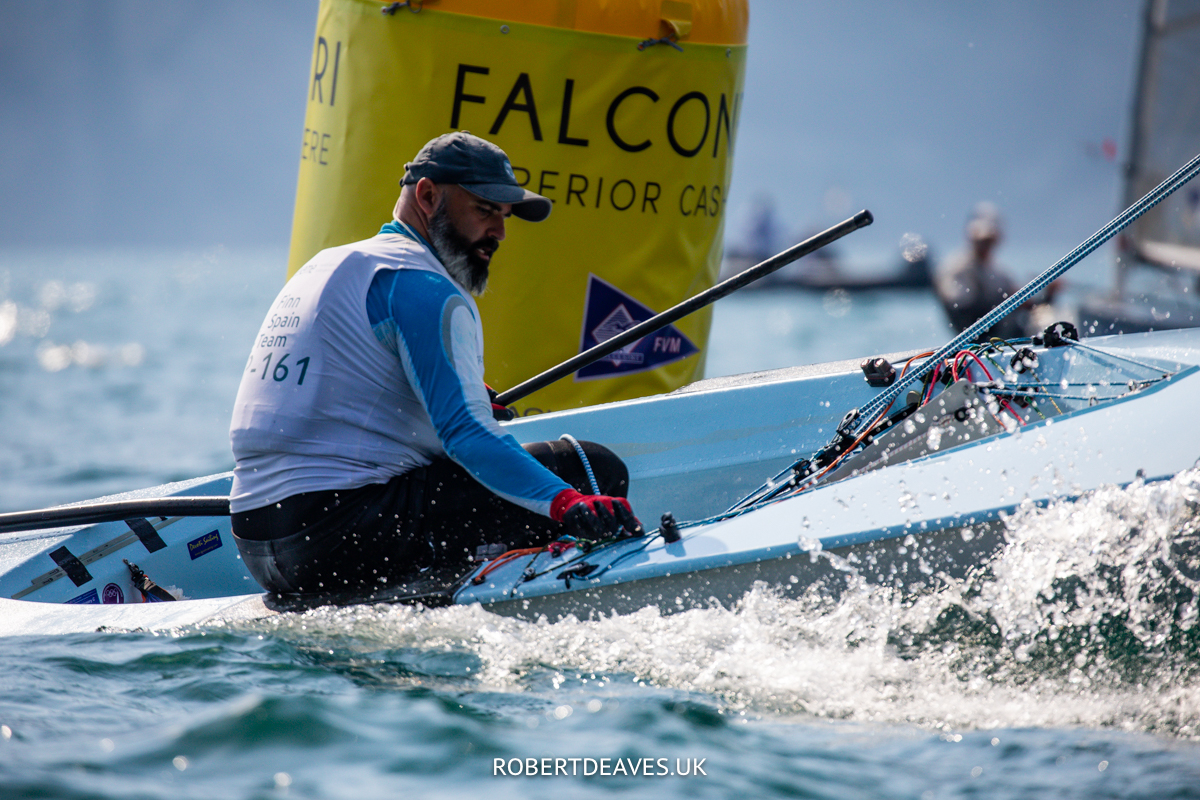 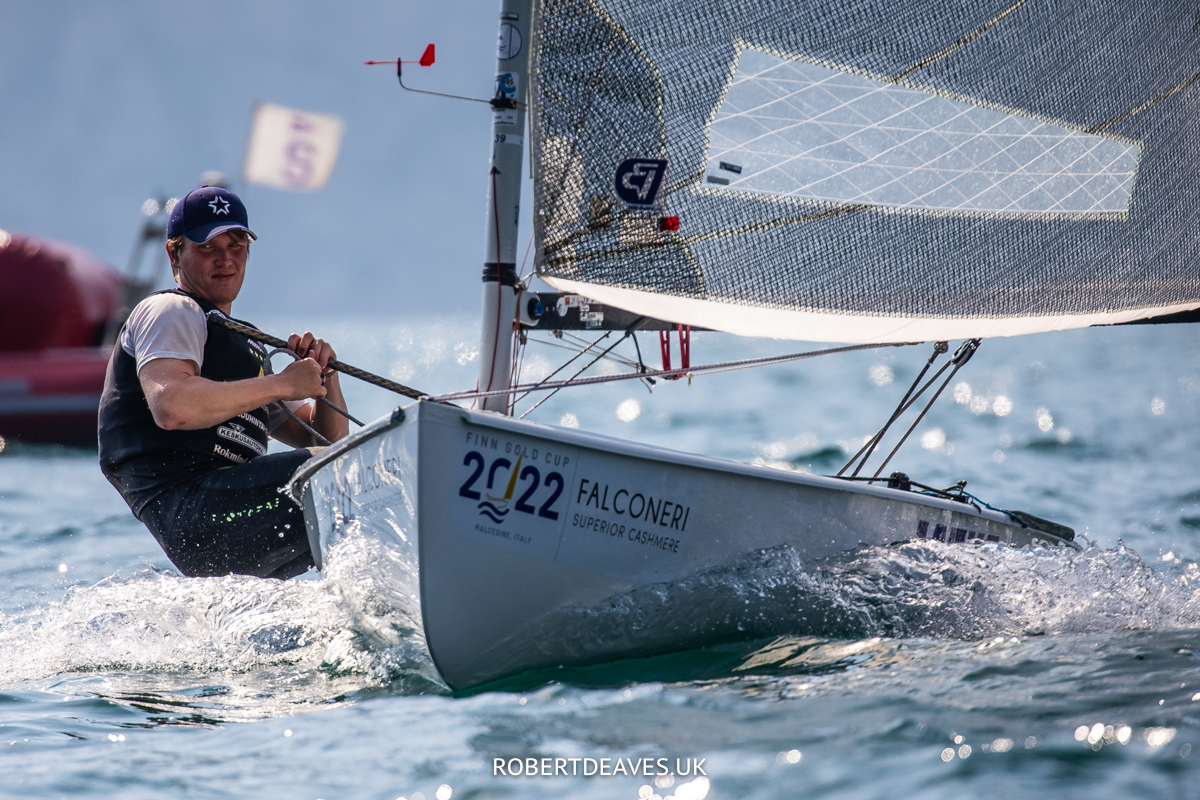 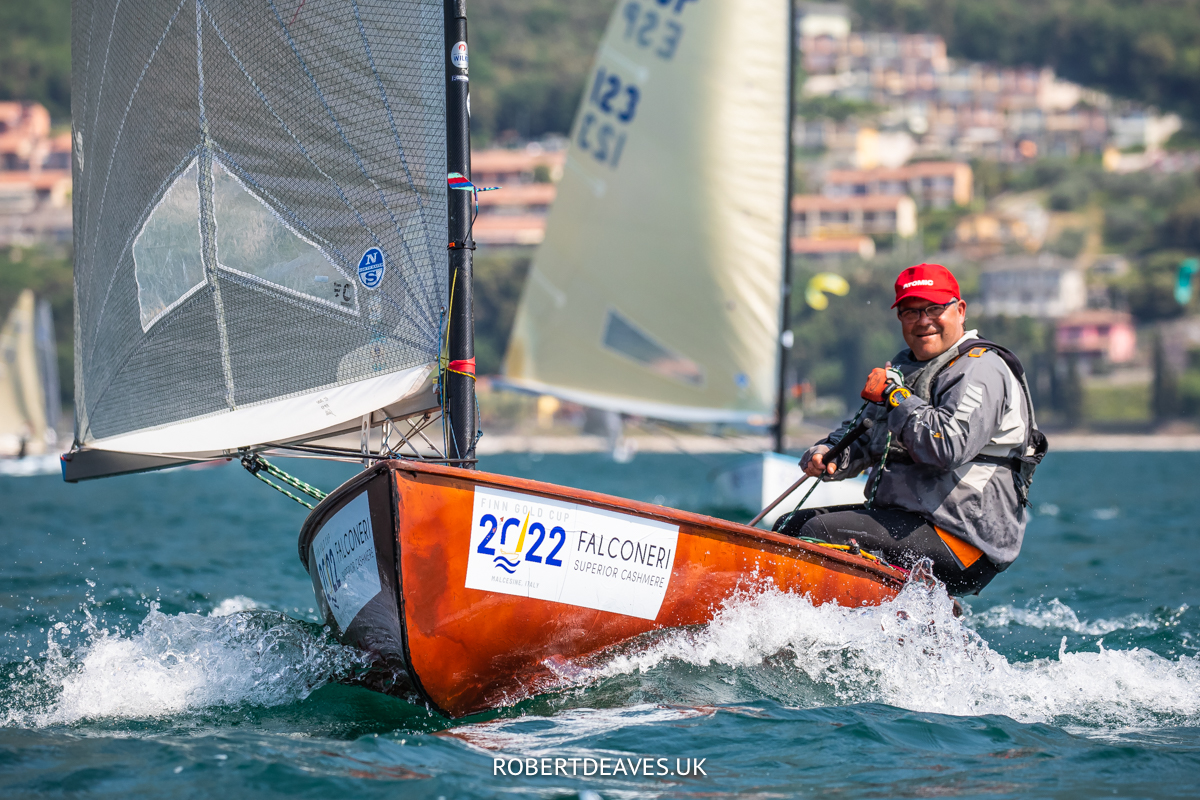 VENUE
The 2022 Finn Gold Cup (the Finn Class World Championship) is taking place in Malcesine, Italy from 15-21 May, organised by Fraglia Vela Malcesine in conjunction with the International Finn Association.

PRESS RELEASES
The Finn Class will release international press releases each day during the event. Sign up to receive these at: http://www.finnclass.org/media-finn/newsletter-a-press-release

and also on the event website.
Please send any requests to robert@finnclass.org