Well I came third, and apparently that means I have to write the report for the event. Sorry but for you all that means my finest Strayan (Australian) English. I’ll put some translations at the end for those not familiar.

For this event is a little special. Koblenz is where my “Missus“ comes from. Since seeing the river with some boats sailing in 2018 when I first visited I wanted to sail there. I first tried in 2020, but no wind meant we didn’t sail… now I can say I have “knocked it off“.

From the moment I rolled in to the Yacht Club Rhein Mose on “Fridee“. I was made feel very welcome. Jannik and Lisa prepared a great meal for the early arrivers, Spag Bol and some “coldie’s“. Camping was setup right on the river bank, another novelty for me as I have never camped in the middle of a city before. Once we finished dinner, told a “yarn“ or two, I climbed in to the “rack“ for a “Kip” on my „swag“, falling to sleep with the full moon rising over the opposite river bank.

“Satdee“ morning was a lazy time, a much needed break from the „ankle bitter“ for me, and another chance to do „F-All“ talking with the great people of the event. I was starting to really understand the appeal of this regatta.

Boat setup, briefing done, it was time to hit the river… Launching should be easy, no “Crocs“, major bonus when river sailing out side of Australia. The river is hardly flowing at the moment, due to the drought I am told, making the sailing a little easier in the light wind.

Yes it was light, we had up to 6 knots at times but also zero at other times. The race committee did a great job setting the course for the Easterly, south easterly, South Westerly, Westerly wind we had… (all on just the first leg of the course). But despite sounding terrible, it was actually rather lovely sailing. There is definitely a reason the Claus and Jannik were out in the lead. It was not a lottery by any means. They sailed very well, and showed that their knowledge of the river put them in the right place at the right time.

The course sailed to the east, down river to a top / bottom mark (I’m still not sure if it was a windward or leeward mark) right in the city party zone.
It was easy found by the German Discotek „stink boat“, with its music so loud that you could see ripples coming from its hull. As we nears said „Stink Boat“ it was clear there was a lack of “Sheila’s“ onboard… too much of a „sausage party“ for me, so tactically better to stay away from the “Bogans“.

Downwind back to the bridge to complete the lap was tricky, often the trailing boats would gain as the thermal wind would fill in down the course. It took me a race or two to figure out the pattern of how the wind filled across the river, but it did have some consistency. Well until you got the odd gust from the opposite direction, hahahahaha…

For the first two races the course was shortened at the second top / bottom mark, allowing a nice drift back to the starting area past the many people paddle boarding, swimming, and chilling out on the shoreline. The city during Rhein in Flammen really comes alive, I have been many times to Koblenz over the past 3 years, and it was the most vibrant I have seen the city.

The final race is when the real action started. The easterly wind kicked in and held for the leg to the now proper top mark. Again the local knowledge of Claus and Jannik showed, to lead the fleet for the first lap comfortably. However the last downwind back to the finish proved to be the challenge. I didn’t realise at the time I was racing Stephan (from my other of Biblis) for the rights to write this report, I hope everyone is happy I raced so hard.

The wind died a few times and cries of “Crikey Mate” (my translation) from Claus and Jannik approaching the finish line could be heard across the water as the Biblis team of myself, Stephan, Georg, Marco and Bernd came rumbling down to catch them. Claus managed to hold his lead for the victory, a just reward for all the „Hard Yaka“, but Jannik snapped defeat from the jaws of victory to score a third which raised me up to second for the race and the grand prize of writing this article.

A great day and I have no idea how the race officer Heinz-Georg Monreal managed to get three races in,“good on ya” mate. It was great to see the stunning timber planked Finn of Karl, as well as Stefan who travelled from Stuttgart and the very enthusiastic Bernd from YCRM. I said at the start that I am starting to understand the appeal of this regatta. Its about the people, the sailing is a bonus. I would encourage every sailor in the region to come to this event, its by far the most relaxed, fun event I have done. As long as you carry this fun into the sailing when it does happen, you’d be „Stoked“.

The after racing “barbie“, was second to none, with more “coldies“, some great “Tucker“ of steaks, “snags“, lots of salad and bread, making everyone „choc-a-bloc”. The whole group got dressed in our finest “Thongs“ and took the “Tinny’s“ down the river around 10pm where the club put on some lovely fireworks for their visitor from the Royal Hong Kong Yacht Club. What more can a “bloke“ from Down Under want. And yes the German Disco Boat was still going strong… an impressive 12 hours after first firing up the doof doof.

Thanks Jannik for putting on a “Ripper“ event, all the “Frothies“ and great “Tucker“ by the “billabong“. I’m “stuffed“ after that “Bonza“ weekend.

Side note: the reason I registered from Royal Hong Kong Yacht Club (RHKYC) was due to a request from Heinz Christian Bock a few years ago. He was joking that it would be great to call it the “Rhein in Flammen International Regatta“ 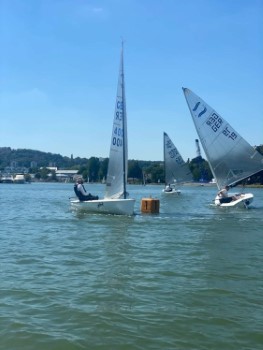