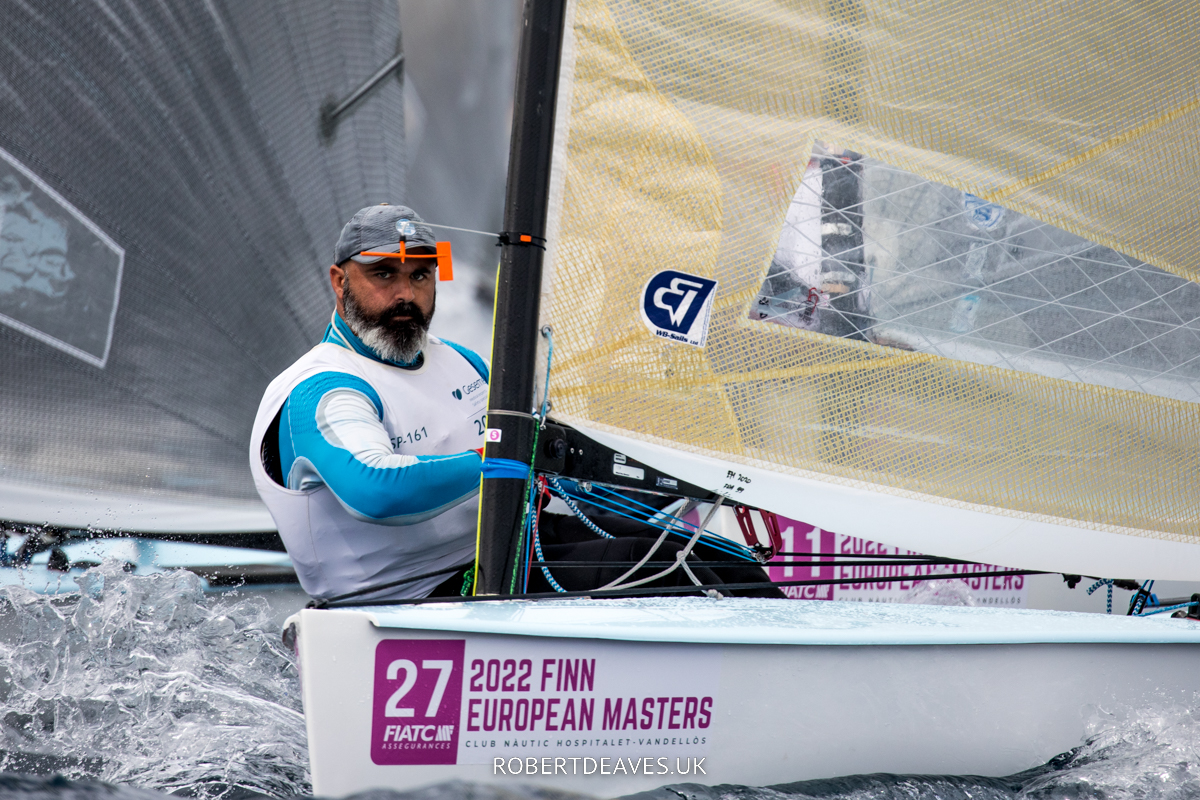 Spain’s Miguel Fernandez Vasco has taken the early lead in the 2022 Open Finn European Masters at Club Nàutic Hospitalet-Vandellòs, at Hospitalet de l’Infant, Spain. Laurent Hay from France is second with Paul McKenzie from Australia in third. Hay and Mckenzie won a race each with Fernandez picking up two second places.

After days of challenging and difficult light winds, the 2022 Finn Europeans opened with two unexpectedly spectacular races in 8-12 knots and some great racing to begin the championship. A huge thunderstorm overnight had deluged the town and left heavy cloud cover, and soon after 12.00 a postponement was raised. However, within 30 minutes a solid south-easterly had filled in and the fleet was launched. Both races got away first time.

In Race 1, Hay rounded the top in the lead, just ahead of Switzerland’s Christoph Burger and Fernandez, and extended that lead to take a comfortable victory. With the wind increasing, the second beat was extended and Oscar flag was raised for free pumping. Burger held off Fernandez for a while but eventually the Spaniard broke through to take second, while the new Spanish champion, David Terol, also passed Burger to take third.

The right was again favoured in Race 2, with McKenzie starting at the boat end to take advantage of a big right shift. He held a comfortable lead at the top from James Bevis, also from Australia, and Fernandez. McKenzie sailed away for a big win, while Fernandez passed Bevis on the second upwind, finishing in that order. 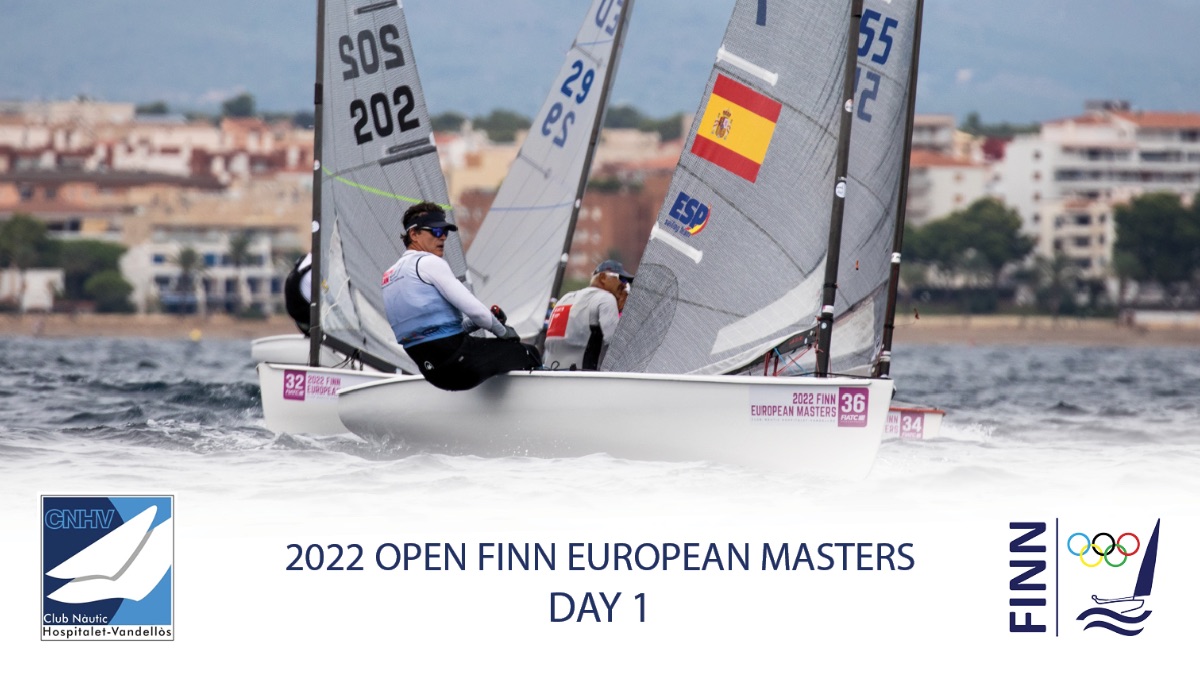 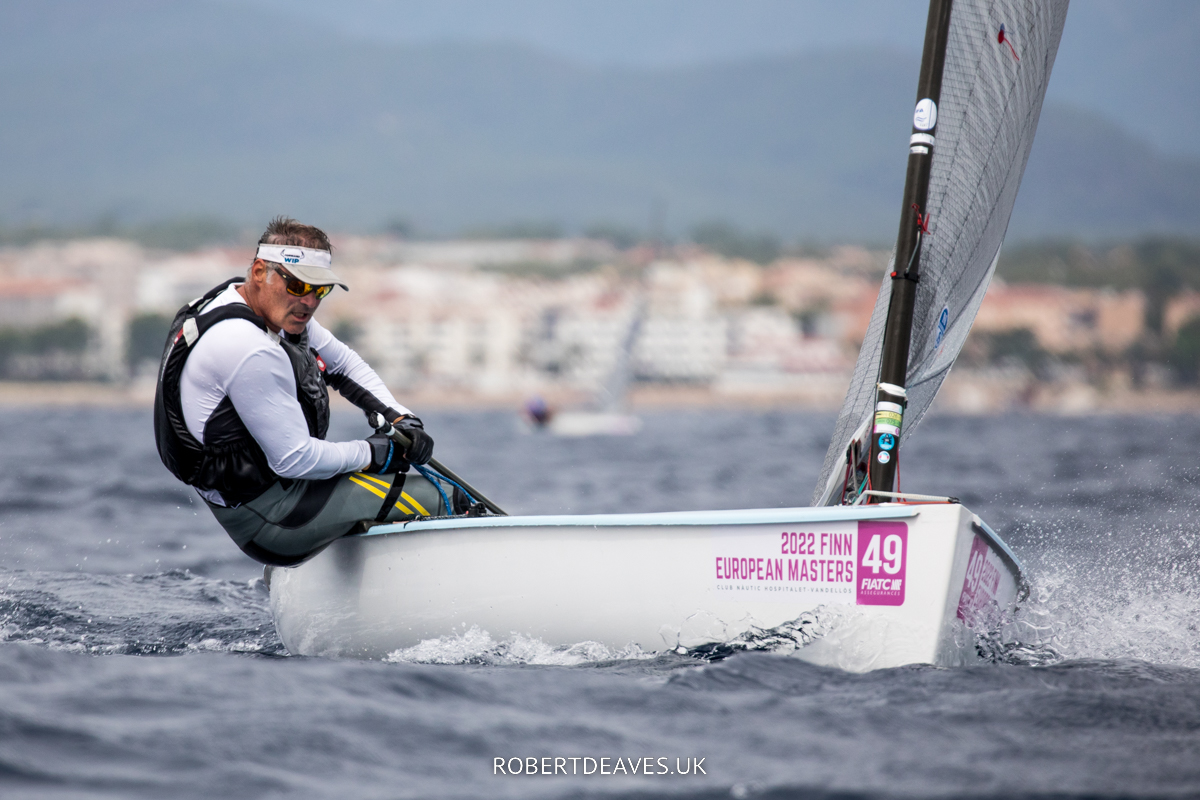 After placing second at the recent Finn World Masters, Hay is hoping to go one better here. He said, “It was a perfect day because the wind was more important than expected, so for the first race we had free pumping on the second downwind leg and on the second race there was a big shift on the right just after the start. I was in the middle so it was not so good, but I improved. I finished fourth and that’s ok for me for this day.”

Mckenzie said, “It’s a pretty good fleet, with some top guys. The forecast, when I looked at it this morning, was 8 to 12/14, and I know that in the Mediterranean you don’t need that much wind for good waves. So I guess we only had about 10 to 12, maybe 8 sometimes on the first upwind of the first race, but the waves were there all the time and that’s what I like.

“So, first race and second race the wind was oscillating really slowly with a bit of a shift one way and a bit of a shift the other way, but the downwinds were the key. If you got around the top mark in good shape you could surf the waves and pass a lot of boats. I didn’t do much on the first race, on the first downwind, but afterwards I passed boats all the time.

“The second race was easy, I had a good start, got on the first shift in phase and I had a big lead at the first mark and it was the easiest race I’ve had for years.” 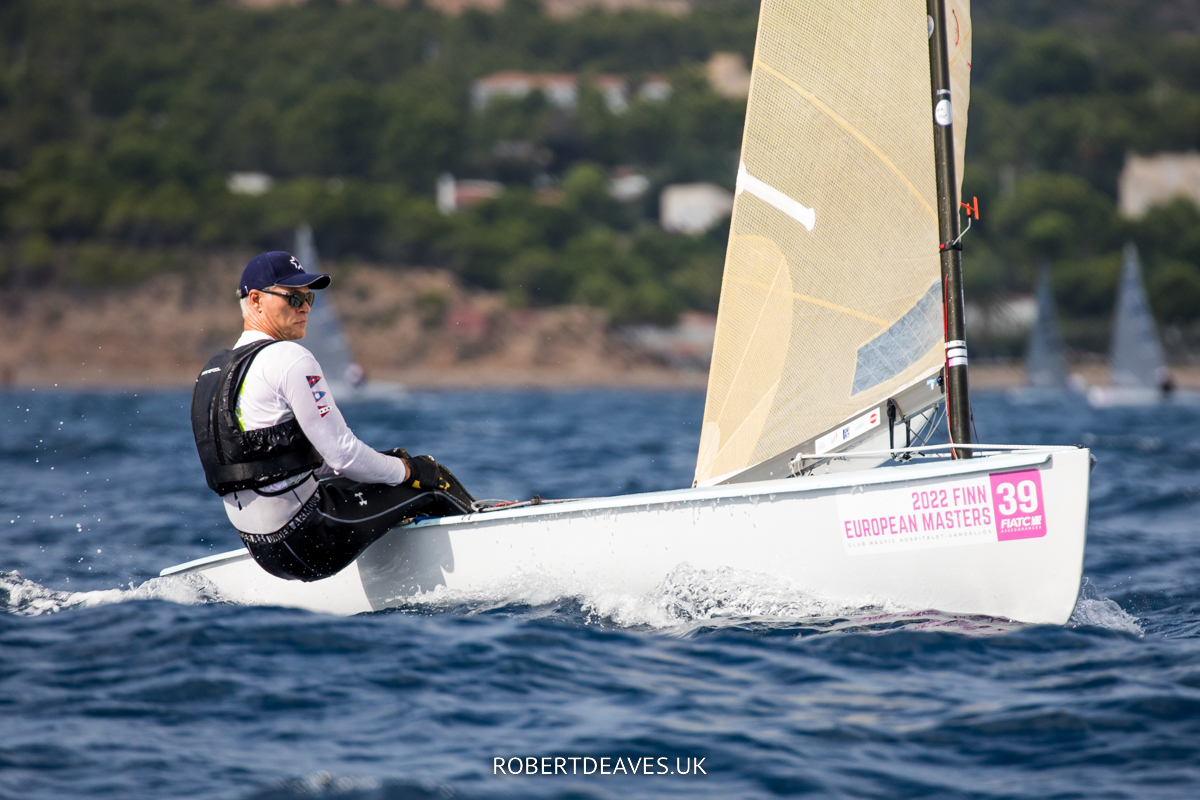 Miguel Fernandez just finished second in the Spanish Championship, so has a bit of an idea of the conditions here and leads after the first day.

“It was a perfect day with 10/12 knots and champagne conditions with a super temperature and it was really nice to sail here. It’s a good spot here in Spain, because we just finished the Spanish Championship and now this event; it’s just perfect for the Finn Class.”

Two more races are scheduled for Thursday, with the start brought forward an hour to fit with the forecast wind. Racing continues until Saturday. 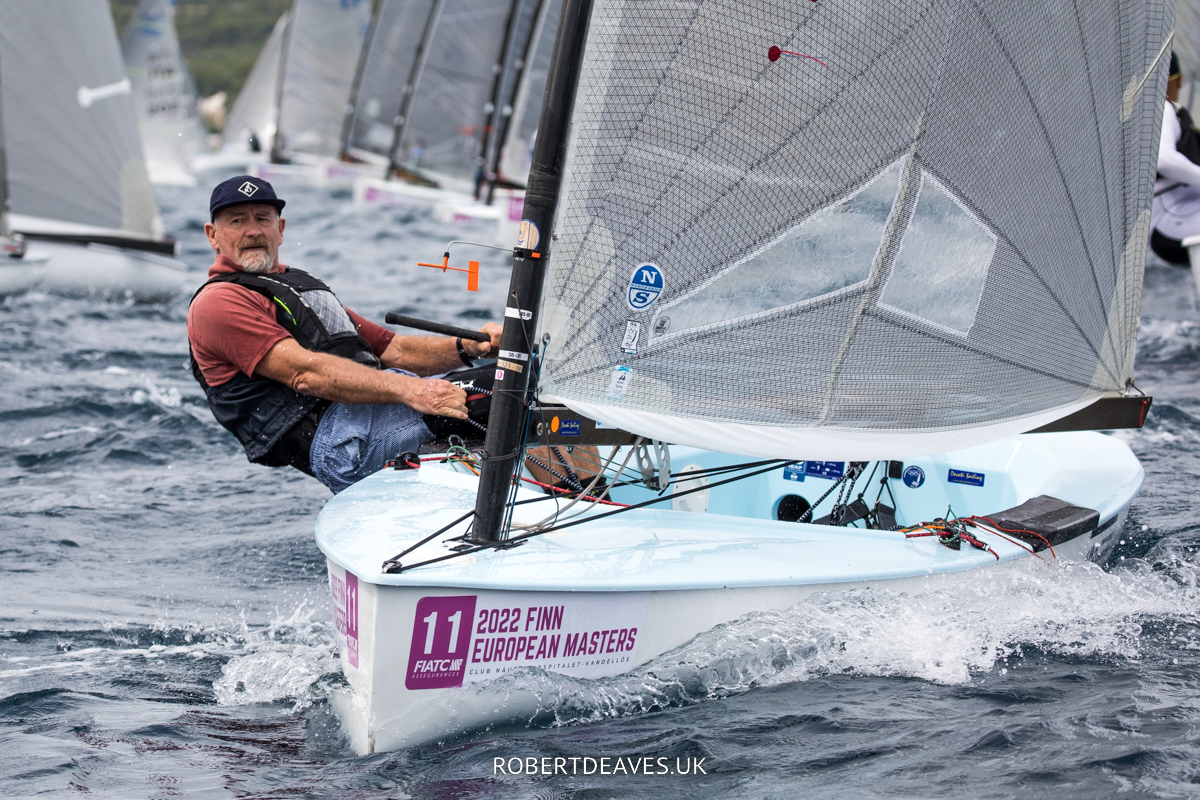 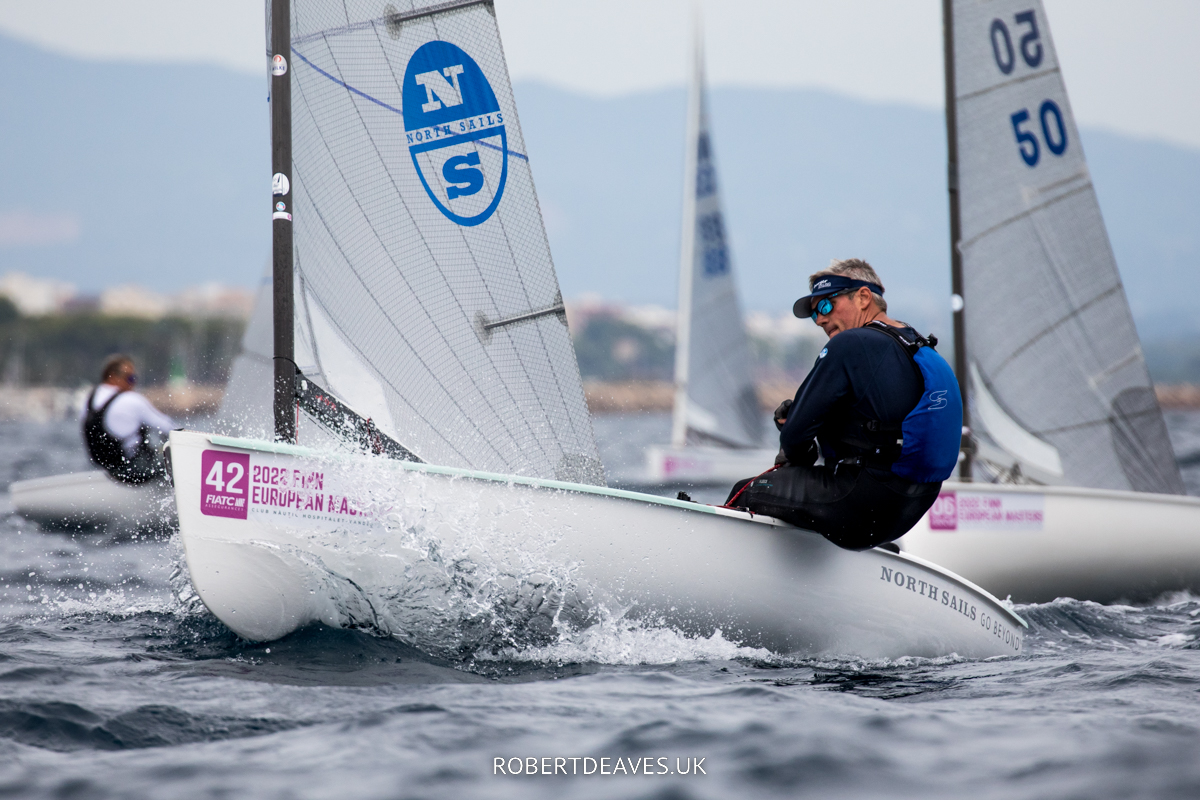 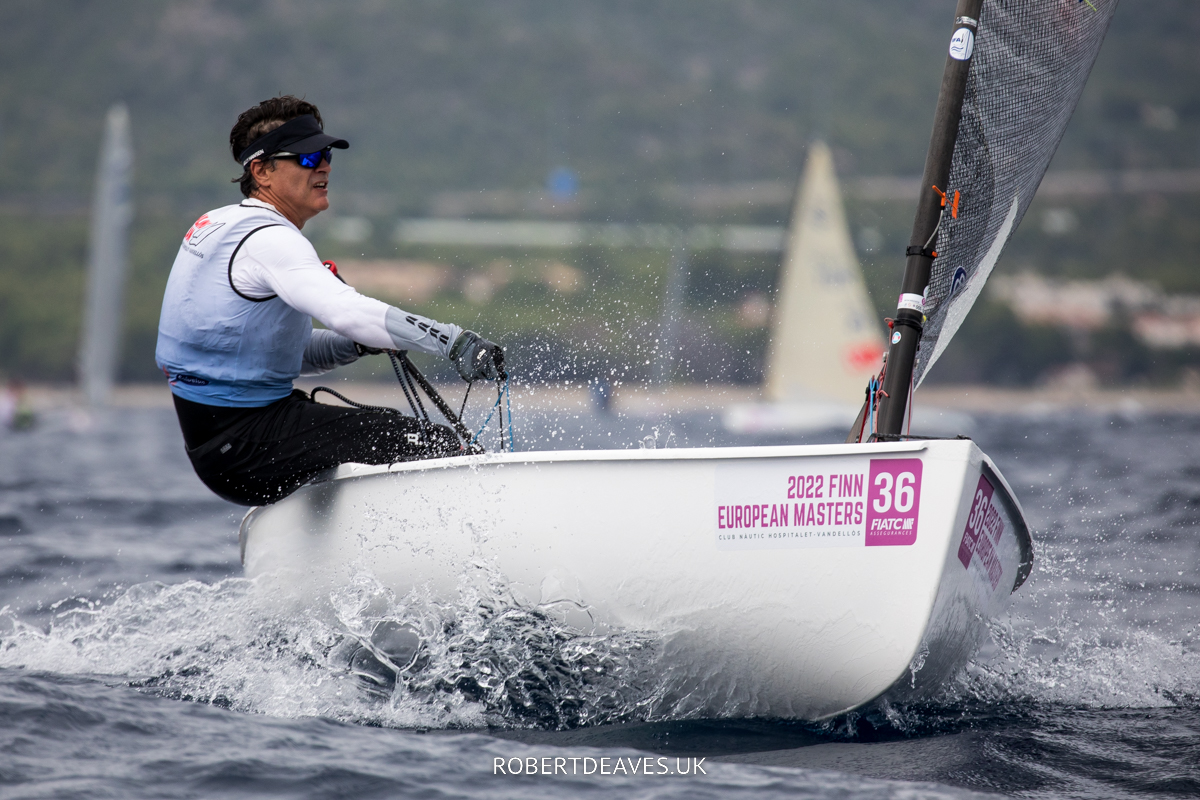 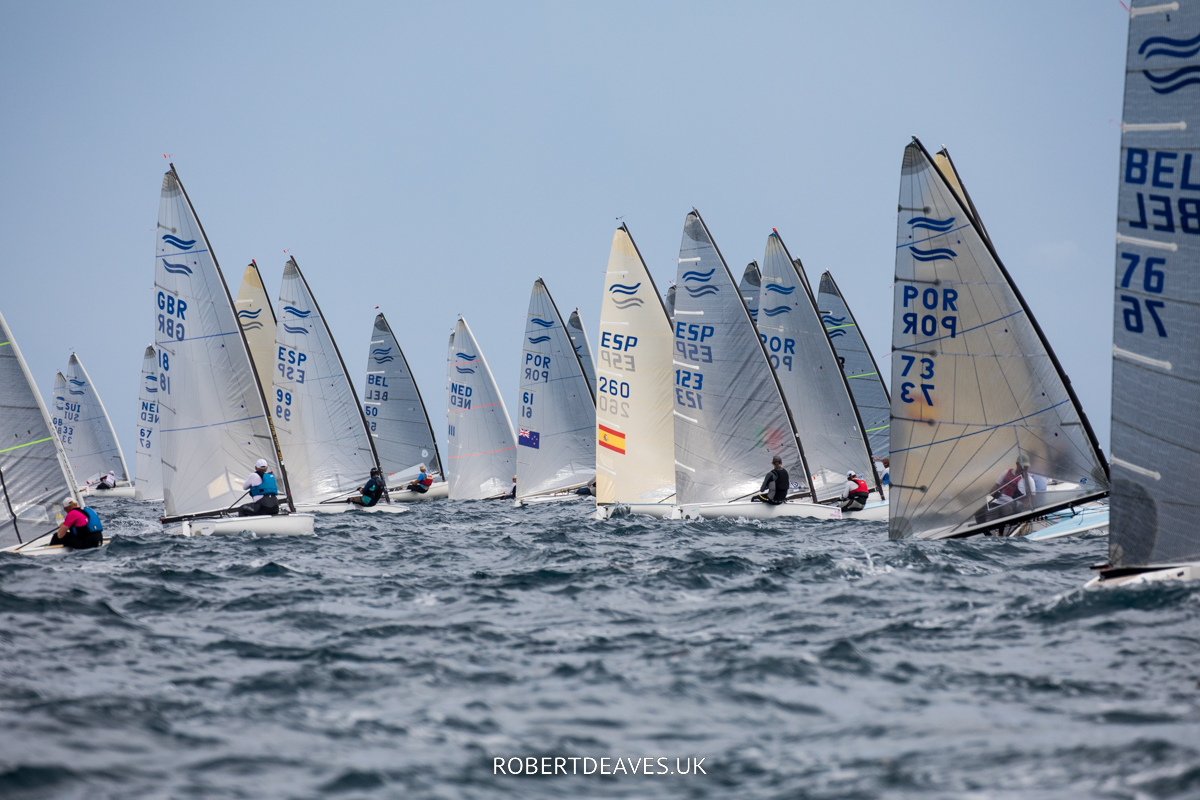 PRESS RELEASES
The Finn Class will release international press releases each day during the event. Sign up to receive these at: http://www.finnclass.org/media-finn/newsletter-a-press-release

VIDEO HIGHLIGHTS
Daily highlights will be available on https://finnclass.org/finn-tv/2022-videos
And on https://www.facebook.com/InternationalFinnClass/

and also on the event website.
Please send any requests to robert@finnclass.org